Edison’s invention of the phonograph pushed manufacture of music boxes, the traditional instrument of the 19th century, to the brink of extinction. Regina’s final masterpiece, into which it poured all its resources in the final days of music box production, was this instrument. Cooperative effort with American Gramophon Co. produced an instrument that can serve both as a music box and a phonograph.
This instrument is of the highest quality and clearly reflects the changes occurring in its day. As there are only several of these instruments throughout the entire world confirmed to be still in existence, it is a very precious item. 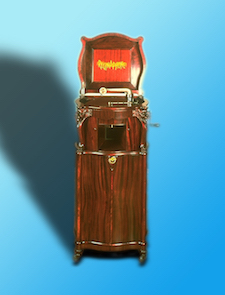