Various workshops have been held periodically at the Min-On Culture Center’s Museum Hall. Among them, the “Music Experience Workshop” for parents and children involving hand-made musical instruments has proved very popular and has been held annually as a public service activity of the Music Museum. With the goal of inspiring children’s talent and wisdom, and deepening family ties, some 200 parents and children take part in each event. The workshops are conducted by professional musicians, who demonstrate how to make musical instruments out of familiar daily objects—for example, a recorder, complete with finger-holes, fashioned from a hollowed-out carrot, or a drum made by stretching tape over a bucket. The children expressed surprise and delight as each creation was produced.

“Introduction to Tango” was another popular workshop, held in 2005, with more than 200 people of all ages and backgrounds participating. The workshop, whose aim was to build interest in Tango among the Japanese public, began with a video introducing the history of Tango and its variations. After that, over the course of the one-hour lesson, the instructors, who themselves had won the Buenos Aires Tango World Championship, helped all participants master the basic steps. Finally, the couple delivered a breathtaking performance to thunderous applause. Similar workshops were held in other cities during the Japan tour of the annual Min-On Tango Series. 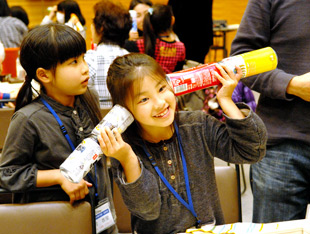 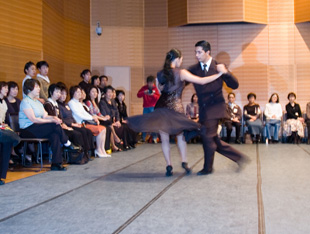 As an organization that brings hope to society through music, Min-On has been a mainstay in the three areas of international cultural exchange, concert promotion and public outreach. Of these three strands of Min-On’s activities—despite significant diversification...