The player piano enjoyed its peak of popularity between 1900 and 1930, becoming the main source of home entertainment. For those who are not familiar with this instrument, it is best described simply as a self-playing piano. Just insert a music roll, take a deep breath, and pedal. The notes to be played are represented by tiny perforations on interchangeable rolls of paper, while the player mechanism is powered entirely by suction, generated normally by the operation of two foot pedals.

This beautiful Marshal Player Piano at the Min-On Music Museum was manufactured in 1915 in London. It features a traditional foot-pump mechanism; however, it was later modified with an electrically powered pump to assist the player’s pedaling action. Player pianos can also be played by hand in the normal way, as the piano action and keyboard are entirely conventional. In fact, it is usually possible to play the keyboard while the roll mechanism is in operation, should any additional notes or harmonies be desired. 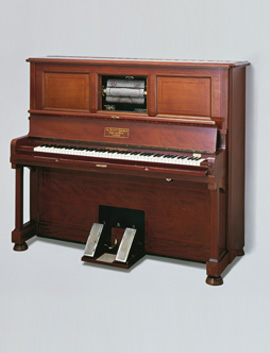