The music box originally derived from the mechanism used to sound carillons, or bell chimes, in church clock towers in Switzerland and other countries. To sound the chimes, a pin embedded in a wooden cylinder or barrel automatically struck a hammer, which in turn sounded the bell. With the invention of the spring in the 16th century, this technology was applied to clocks. In the 1830s, the cylinder music box was created as a mechanical musical instrument completely independent from clocks.

By 1886, a new music box style appeared in Germany called the disc-playing music box. The new disk-playing machine allowed music box owners to change disks with ease. The disks were mass produced inexpensively using metal, and by 1890, disk manufacturers were dedicated to the production of disks for the new machines. The Regina Company of Rahway, New Jersey was one of the most impressive firms in American music box manufacturing, producing various kinds of music boxes.

This model is the Orchestral Corona Style No.33, otherwise known as the “King of Regina.” It is a top-quality disc music box, manufactured in 1897 using all of Regina’s finest engineering techniques. It is capable of automatically playing 12 steel discs in succession. 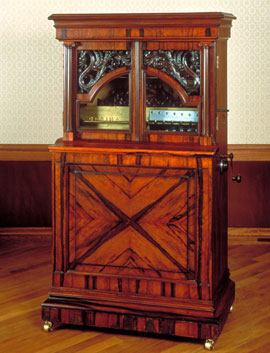