Erard was a great innovator who patented many technical advances in the history of the piano. Both Paris and London factories of the Erard company were producing large numbers of fortepianos equipped with his patented technologies throughout the mid-19th century, and in a sense, all modern grand pianos are descended from the “Erard” Fortepiano.

However, in the late 19th century, after Steinway and other German makers rose to prominence with new technical innovations such as cross-stringing and cast-metal frames, production at Erard declined to the point where its London factory closed in 1890.

Min-On’s “Erard” Concert Fortepiano was known as “The Lady of Pianos” on account of its white exterior. The exquisite carvings on the legs and case suggest the style of Louis XIV, typical of the Palace of Versailles.

This beautiful Erard piano was manufactured in the company’s Paris factory in 1899 when the company itself was in decline. It is a very rare piece because a part of its frame was of cast metal instead of the more typical timber frames of Erard pianos. 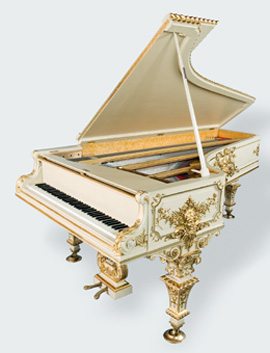