Edison first developed a disc phonograph in 1878. But it was Emile Berliner, not Edison, who developed the commercial disc machine known as the gramophone. Later, the Victor Talking Machine Company marketed the disc phonograph that Edison had originally developed, and by 1907 its sales began to surpass those of the Edison cylinder.

Disc records were longer playing and easier to store, but Edison resisted them due to his belief that cylinder recordings sounded superior. Meanwhile, the Victor Company produced a number of popular disc phonographs, and as a consequence, Edison’s phonograph business never regained its former prominence. Edison withdrew from the phonograph business completely in 1929, and at the same time, Victor’s disc players—most notably the Victrolas—began to dominate the market.

This “Orthophonic Victrola VV.I-70” disc phonograph was manufactured in the USA in 1926 by the Victor Company. Although dubbed “hornless” by its manufacturer, the horn was in fact built into the cabinet. The Victrola series played a key role in popularizing the use of phonographs at home, and the “Victrola” name continued to be used until the 1970s. 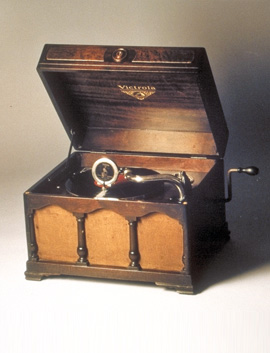