Among mechanical organs, Welte Orchestrions were the premiere automatic musical instrument of choice for royalty and the very wealthy, a trend that began in the 1850s, when Michael Welte exhibited his immense automatic pipe organ, receiving generous critical acclaim and numerous awards for the device.

At the time, his invention was an astounding advance in technology, and word of the huge automatic musical instrument reportedly drew crowds from near and far. The public nicknamed the instrument “orchestrion,” because it successfully imitated a many-voiced orchestra. Since that time the term orchestrion has become synonymous with virtually any automatic musical instrument attempting to imitate a small to large orchestral ensemble.

This “Orchestrion Welte Style 3” is a large mechanical automatic instrument that produces the performance of an entire orchestra. It has an entire mechanical pipe organ with 180 metal and wooden pipes, as well as drums of different sizes, triangles and other sound-making devices built into its oak cabinet with architectural elegance. Owning a fine Welte Orchestrion was a status symbol of its time, sought after by royalty, wealthy industrialists and fine commercial establishments alike. 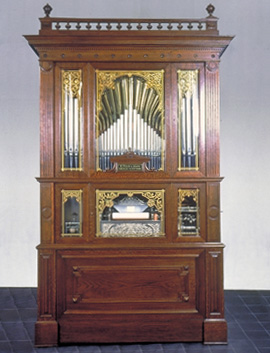