According to the Grove Dictionary of Music and Musicians, Anton Walter was “the most famous Viennese piano maker of his time.” His pianos were highly regarded by Mozart, Beethoven and many other famous composers, and historical records show that Mozart bought a Walter piano around 1782, using it for composition as well as his highly successful piano concertos. The piano survives to this day and can be seen in the house of Mozart’s birth in Salzburg, Austria.

The Walter piano in the Min-On collection is also recognized as a cultural treasure, and is of the same style as the one Mozart owned, with the distinctive knee levers under the keyboard—the equivalent of the modern damper pedals. Only around twenty “Anton Walter” pianos of this style still exist in the world today, and only a few of those are playable. At the Min-On Music Museum, you can enjoy the original sound of the “Anton Walter” fortepiano as it was heard two-hundred years ago in Mozart’s time. 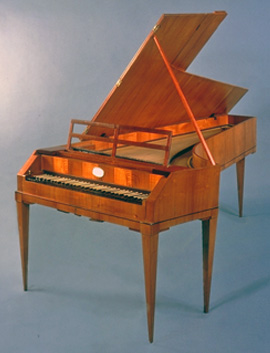