Very little is known about Johann Fritz, despite the fact that he seems to have been a fairly prolific builder, with a number of his instruments surviving to this day. Many aspects of his work suggest that he learned the manufacture of fortepianos in Anton Walter’s workshop in Vienna, Austria.

This Viennese fortepiano, built by Johann Fritz and dating from around 1800, was owned by Count Keglevicz’s daughter Barbara, who was one of Beethoven’s pupils. It looks surprisingly frail, with beautiful gilded decorations, and yet can produce a tremendous sound. Uniquely, it has five pedals, including a so-called “Turkish Pedal” to trigger a mechanism consisting of bells, cymbal clash and a drum mechanism striking the soundboard. 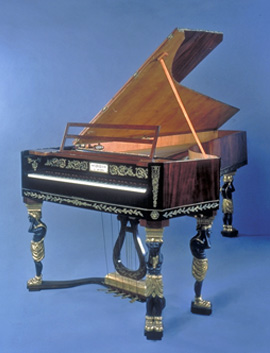