The 1880s saw the first disc music boxes that used flat discs. Demand for music boxes increased rapidly as the cumulative effects of the Industrial Revolution and the popular revolutions of the late 18th and early 19th centuries meant that music became accessible to all people instead of being an aristocratic preserve.

This Lochmann “Original” upright coin operated musical box, model 172, was manufactured in 1904 in Germany with duplex musical combs accompanied by twelve bells and a tubular chime in a beautiful oak case, and was celebrated for its superb, exceptionally rich tone. These highly desirable instruments were typically installed in public places such as bars, restaurants and clubs, attracting customers, who would drop a coin into the machine to listen to its wonderful sound. 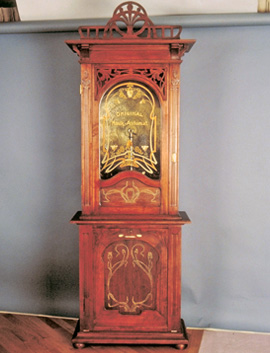