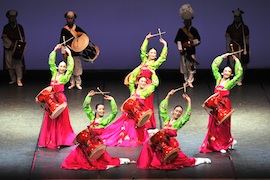 The Gyeonggi Provincial Dance Company Korea is Japan’s closest neighbor, and at various times throughout history the Korean Peninsula has influenced various aspects of Japanese culture, acting as a kind of cultural bridge between Japan and China. On October 31, a...