Min-On Concert Association was founded as a nonprofit organization in 1963, and two years later, it was legally recognized as a general incorporated foundation. It contributes to many public service undertakings through outreach programs, which aim to foster the flourishing of music and art among the general public, as well as the cultivating of artistic sentiments, especially in children and young people. October 18, 2016 marked the 53rd anniversary of Min-On’s first inaugural concert, held at the Bunkyo Civic Auditorium in Tokyo. That moment was the beginning of a new musical movement reaching out to everyday people. These two pages feature some of the most popular series of Min-On’s admission-free outreach programs. 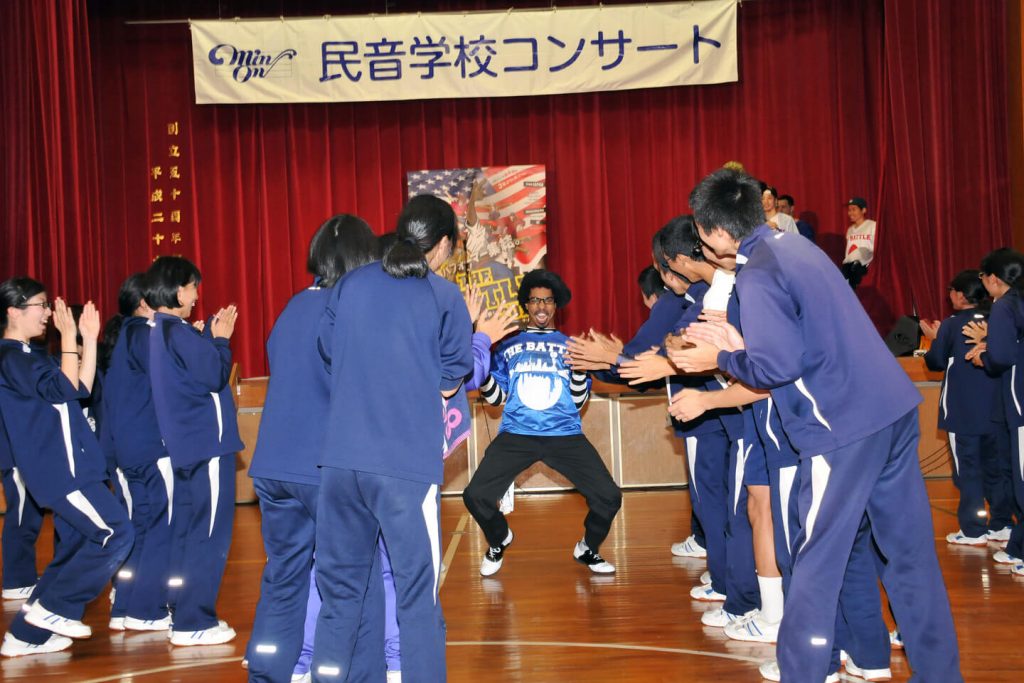 Since its first installment in 1973, Min-On has provided admission-free concerts at primary and secondary schools throughout Japan, including remote areas—such as isolated islands and mountainous regions—to offer younger generations the opportunity to experience a rich selection of live music from artists hailing from all over the globe. Over the last 43 years, more than 1.3 million students in over 4,300 schools across Japan have enjoyed Min-On School Concerts. This photo shows veteran dance crews from Team USA on the Japan tour of The Battle—Street Dance Competition attending a school concert at Kiyagawa Junior High School in Yamaguchi prefecture. The students immensely enjoyed their interactions with the world-champion breakdance crews. 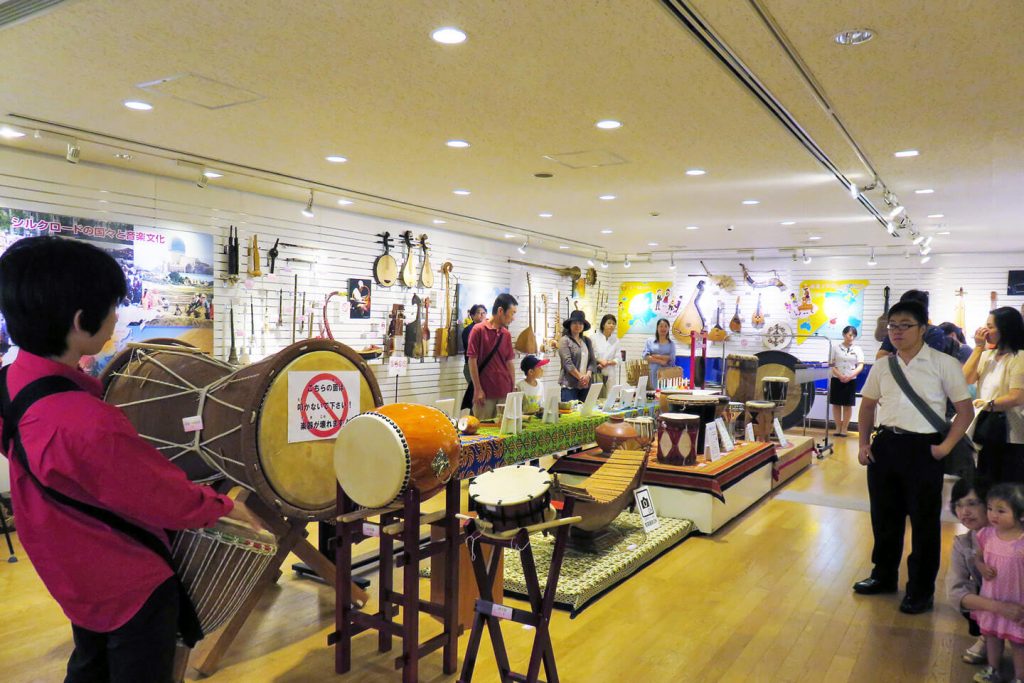 The Min-On Music Museum has developed a permanent exhibition showcasing classical pianos, automatic musical instruments and a variety of ethnic instruments donated from performing artists or collected from countries around the world. Aside from the permanent exhibitions, it also occasionally hosts a series of specially curated exhibitions with unique musical themes. One such event that enjoys great popularity during summer vacation is an annual folk instrument exhibition specifically designed for school children. Comprising some 100 instruments, visitors can actually play the instruments during this special exhibition, giving children and parents a chance to experience international music culture. These events open their eyes to the world and nurture respect for cultural diversity. The Music Museum periodically hosts various workshops, including the Music Experience Workshop for children and parents, which focuses on hand-made musical instruments and enjoys great popularity annually. With the goal of inspiring children’s musical talent and knowledge, as well as deepening family ties, some 100 parents and children participate. The workshop is conducted by musical experts, who are invited to demonstrate how to create hand-made instruments out of household objects. This photo shows a father and son putting their heads together to create a hand-made instrument called a marinkan. Two empty cans of the same shape—one filled with water—are bound together with vinyl tape to keep the water from leaking out. Then, you can have fun listening to the sound of water flowing through the linked cans. Handcrafting a marinkan is that easy. The children are surprised and delighted at each creation, and the workshop is a fantastic opportunity to create rich and meaningful musical experiences, for children and parents alike. 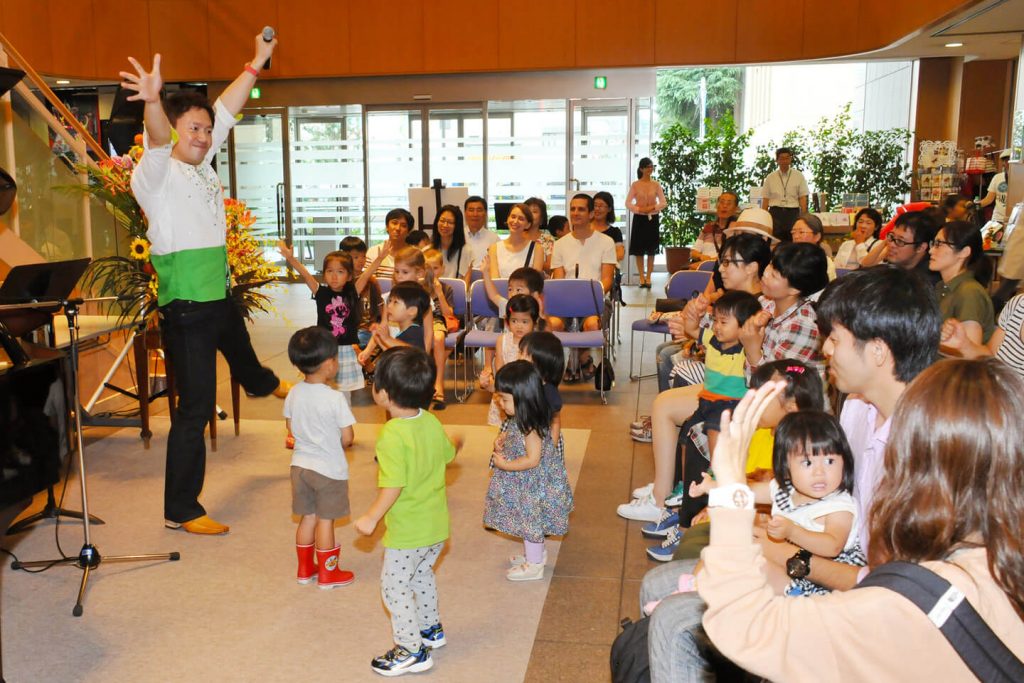 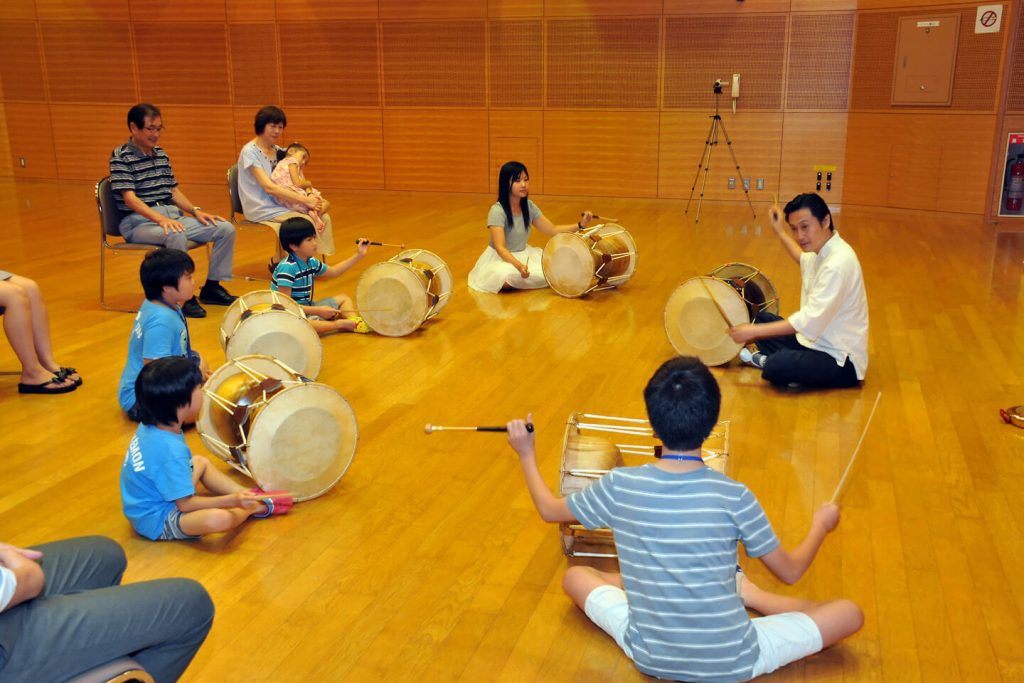 In addition to the annual Folk Instruments Exhibition for Children, another series of special programs were planned for children during summer vacation. This year, Osamu Hinata, who regularly appears on the popular kid’s TV show “Singing Together with Mother,” was invited to conduct an interactive mini-concert at the Melody Hall in the museum. He cheerfully performed for the pre-school and elementary school children, acting as a big brother to teach everyone singing and dancing together. To have the character from their favorite TV show performing live onstage was a special treat for everyone. Another recent special program was a workshop focused on the musical culture of Korea. Master of Korean traditional music Lee Chang Seop was invited to give an intimate lesson to children and parents on the Korean hourglass drum called janggu. Although the workshop was a short one, the experience of receiving a lesson from the Korean master greatly helped both children and parents to spontaneously nurture not only an appreciation for music, but also great respect for Korean culture. 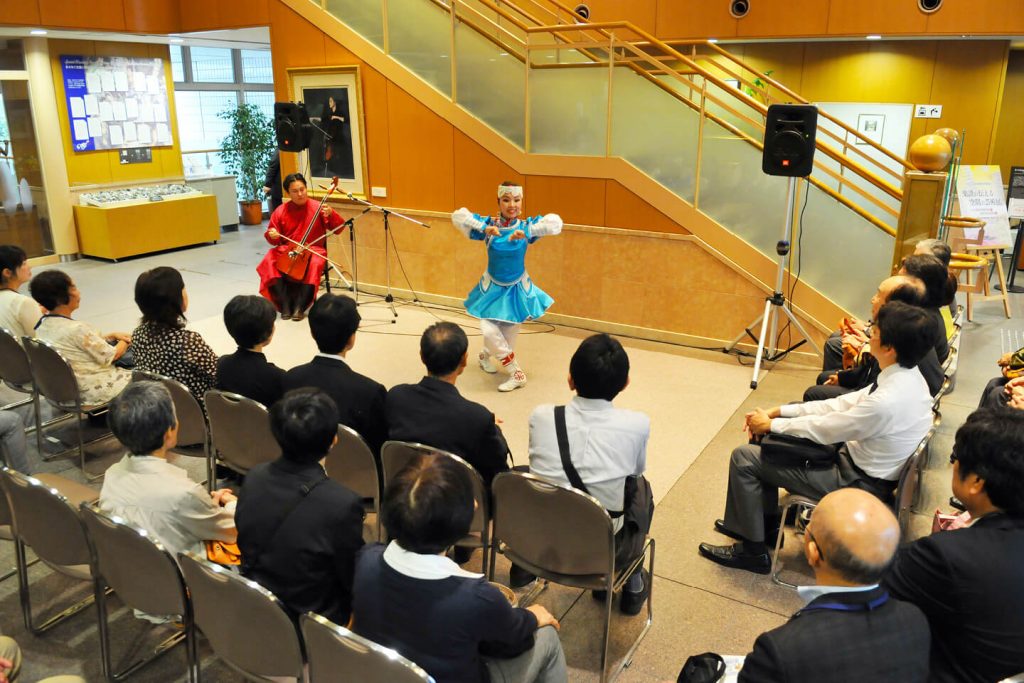 Just as salon music from Europe was originally born through small concerts occasionally held in intimate public venues, the Min-On Music Museum has periodically provided a series of admission-free mini concerts as an extension of its outreach program. These shows are staged in the grand foyer of the museum, which functions as a multi-purpose salon for guests and visitors. Although very small in scale, this casual opportunity to enjoy live music has raised the level of music appreciation amongst the general public. Furthermore, it is a perfect chance for upcoming musicians and artists, including lesser-known international artists, to present their unique musical repertoire. The 26th installment of the salon concert series was held on October 1 this fall, featuring a collaborative performance from musician Amarjargal Dolgion, who plays a Mongolian stringed instrument called the matouqin, and Zorigtbaatar Bujin, a dancer. The exquisite beauty of traditional Mongolian musical culture—showcased through this special live museum exhibition—delighted the small and intimate salon audience.

Another popular outreach program provided by the museum is a series of music-related cultural lectures. Cultural commentators, artists and music critics are invited to speak on various themes, often pertaining to special exhibitions held at the music museum. As outreach programs open to the general public, these lectures advocate the flourishing of music culture and performing arts. This year marked the 50th anniversary of The Beatles’ first concert tour to Japan, and a cultural lecture series entitled Looking Back Over 50 Years with The Beatles was held at the Museum Hall this fall. Two lecturers were in attendance—Naoki Tachikawa, well-known Japanese producer and music critic, and Rumiko Hoshika, editor of Music Life magazine who held the first private interview with The Beatles in Japan. They were joined onstage by world-renowned trumpeter Toshinori Kondo. Each lecturer spoke on their personal experiences and unknown episodes related to the Beatles, in addition to conducting a panel discussion on various topics spanning 50 years with the band. The audience enjoyed the panel discussion greatly, as well as special performance of The Beatles’ Let it Be from Toshinori Kondo, which drew enthusiastic applause.