Interview with His Excellency Mykola Kulinich, Ambassador of Ukraine 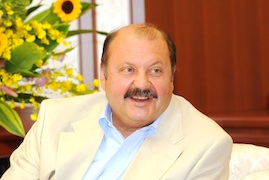 “Ukraine is a nation of singers and music.”

Min-On: We appreciate this opportunity for an interview with your Excellency. Could you briefly introduce the esteemed culture of Ukraine for us?

Ambassador Kulinich: That’s no easy task. We have a very specific and long-established cultural background in Ukraine, so it’s not easy to briefly introduce our culture in general. We have been an independent country for only 20 years, yet at the same time we are the most ancient nation in Eastern Europe. Our capital Kiev was founded more than 1,500 years ago, and was the biggest capital in the state of Kievan Rus’, which united all Slavs in the East, as well as most Russians and Ukrainians. Kiev is also considered the cradle of Christian civilization in Eastern Europe, so we are the most ancient as well as the most easterly Christian country, with a long history and a culture with deep roots.

Our music culture in particular was heavily influenced by various folk and ethnic cultures from many different areas. One of the most impressive and also most important parts of our earlier culture is from the Scythians, who migrated west from Asia more than 3,000 years ago. They left incredible gold artefacts, which are now priceless national treasures. These artworks have been exhibited in various countries, including currently in Japan. They are both exquisite in themselves and remarkable expressions of artistic skill and craftsmanship. They are also the finest examples of how a rich cultural heritage has been handed down through thousands of years, even though we are a very new independent nation. 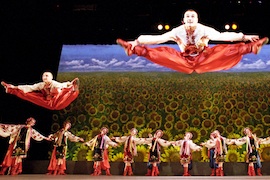 Min-On: Min-On has invited the internationally acclaimed Ukrainian National Folk Dance Ensemble twice in the past, and their superb performances drew enthusiastic applause from audiences all over Japan.

Ambassador: I can say with confidence that we have an outstanding musical culture, especially when it comes to singing. Ukraine is a nation of singers and music. I believe that Ukrainian opera and Ukrainian singing are among the world’s best for two reasons: First, we have a very long tradition of singing; and second is thanks to the Ukrainian language itself, which is very melodic and highly suited to singing. It is said that two European languages are especially suitable for singing: Italian and Ukrainian. Indeed, the sounds that comprise the two languages are quite similar.

Ukrainian singers are represented at La Scala in Italy and in many other theaters around the world. We have many fantastic singers, and I am proud that several are prima donnas and leading opera singers with famous operas in Europe and elsewhere.

Our traditional folk songs, on the other hand, are not so joyful, often containing sad lyrics. This is perhaps because Ukraine was a nation of warriors—the history and tradition of the Cossack. Ukraine was a crossroads of politics and different tribes and nations, so Cossacks struggled and fought to protect their homeland. Traditional Cossack songs are expressions of struggle, love, life, worries and loss; however, their dance is joyful and dynamic, expressing their energetic and active lives in dance. We are deeply grateful to Min-On for introducing the culture and musical traditions of Ukraine to the Japanese people. 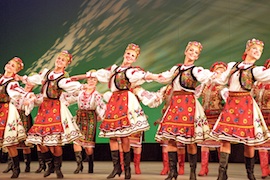 Min-On: Please share your experience of performing music in your own career as a singer.

Ambassador: Although I am not directly involved in musical activities anymore, I was a singer at school. At the boys’ school I attended, boys with certain voices would be selected for the choir, and I was one of those picked. Boys’ choirs were a tradition of the Catholic Church, and the clear voices of prepubescent boys were especially treasured. From the age of 11 through 14, I was a member of the Children’s Chorus of Kiev— one of the most acclaimed choirs in Ukraine— and had the chance to sing in Georgia, Estonia, and many other areas. As I grew older, my voice was less successful, but many of my friends are still singing professionally, and one has a successful career singing with the Bonn Opera in Germany.

My life as ambassador in Japan is very fulfilling partly because there are so many wonderful opportunities to see and listen to fine musical performances by leading international artists. Tokyo in particular is full of artistic treasures from around the world.

Min-On: Please share any comments and suggestions you have for the Min-On Concert Association.

Ambassador: One thing that distinguishes Min-On from other concert organizations is that it has a spiritual underpinning. Min-On has a clear sense of mission to create wellbeing. It’s not just a commercial concert promoter, but something more; its priority is the presentation and exchange of musical culture from around the world. I really appreciate that Min-On has provided opportunities not only for concerts of classical music and ballet, but also for traditional folk and ethnic performances with different cultural roots. These unique cultural exchange activities help develop mutual understanding and respect, and bring people closer together. I also recognize that Min-On attracts sophisticated audiences from all generations. I feel that Min-On’s activities are not simply one-day projects connecting audiences with the performing arts, but represent a long-term project to strategically connect the heritage of music culture to future generations and the future of the performing arts. Min-On is a wonderful platform to spiritually unite people in a very natural and spontaneous way.