Welcome to the 16th installment of Min-On’s Music Journey! Today the Min-On Concert Association and the Embassy of Ukraine in Japan welcome you to Ukraine, a country filled with beautiful fields of blooming sunflowers. Ukraine has planted many sunflower fields in massive vacant fields where nuclear missiles were once stored underground. In 2013, it surpassed Russia as the world’s leading producer of sunflower seeds.

The capital of Kyiv, a city of art and music

Ukraine’s capital, Kyiv, is the oldest city in eastern Europe, with a history of over 1,500 years. Kyiv is a very green city where residents enjoy the changes of the four seasons. The Saint Sophia Cathedral, which was registered as a World Heritage Site in 1990, has played an important political and cultural role in the country. It once housed a university and library, and also served as the location of both coronation ceremonies and funerals for the grand dukes of Kyiv. Because the cathedral has been preserved in the same state since the 11th century, visitors today can enjoy frescoes, mosaics and works of art from that time. Kyiv is also home to many well-known orchestras and musical organizations, including the National Opera of Ukraine, a testament to deep local interest in culture and the arts. 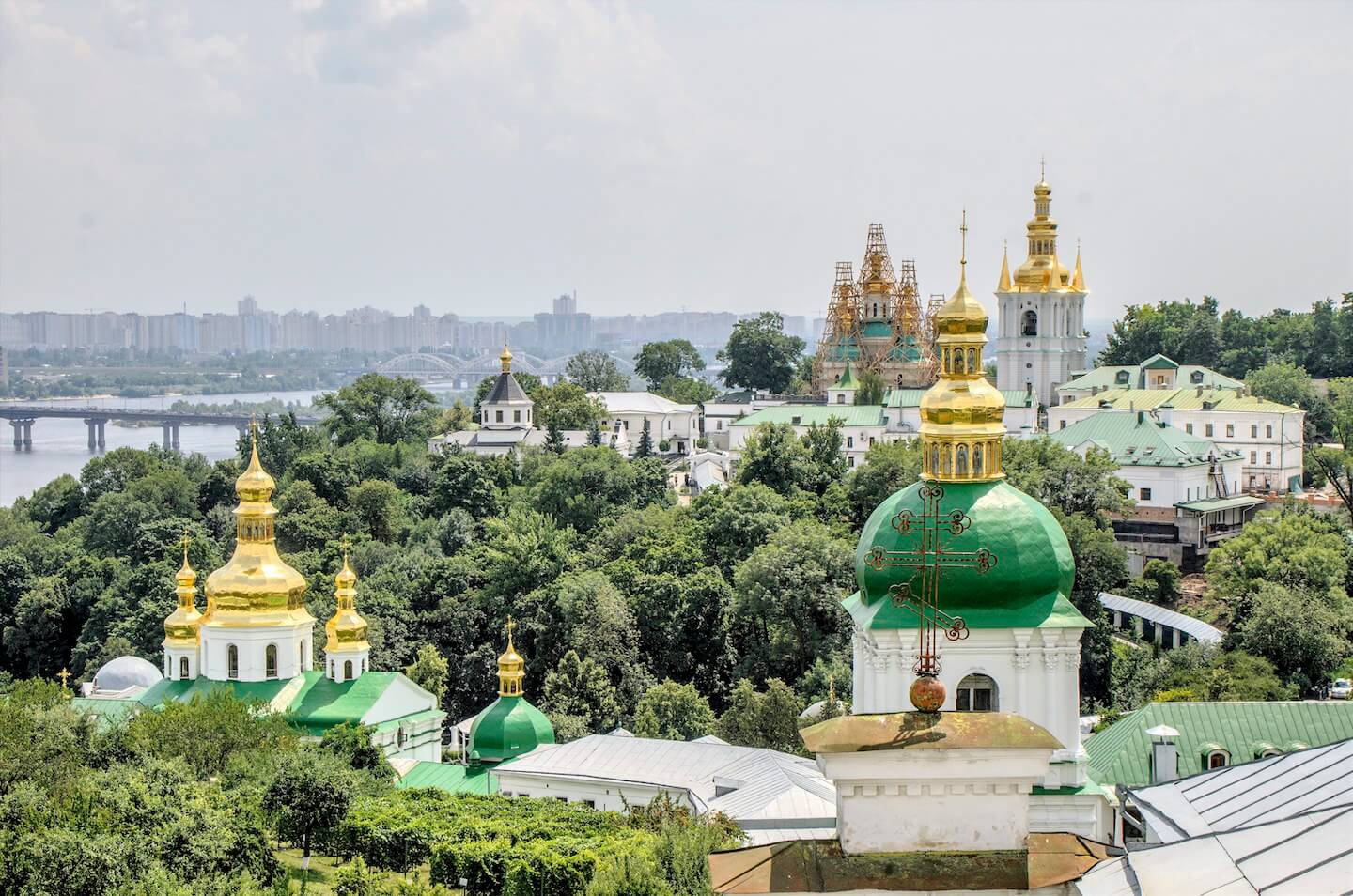 The unique city of Odessa

The port of Odessa in southern Ukraine is known as the “Pearl of the Black Sea” for its beautiful scenery along the famous body of water. The Potemkin Stairs, a major symbol of the city, are quite famous and were used for a scene in the landmark Soviet film, “Battleship Potemkin.” The stairway has a unique visual concept: when viewed from the top, only the landings are discernable, and when viewed from the bottom, only the steps can be seen. With a total of 192 steps, the stairway was built to connect the city, which rests on high ground, to the bay in the south. The top of the stairway provides a fantastic view of the Black Sea. 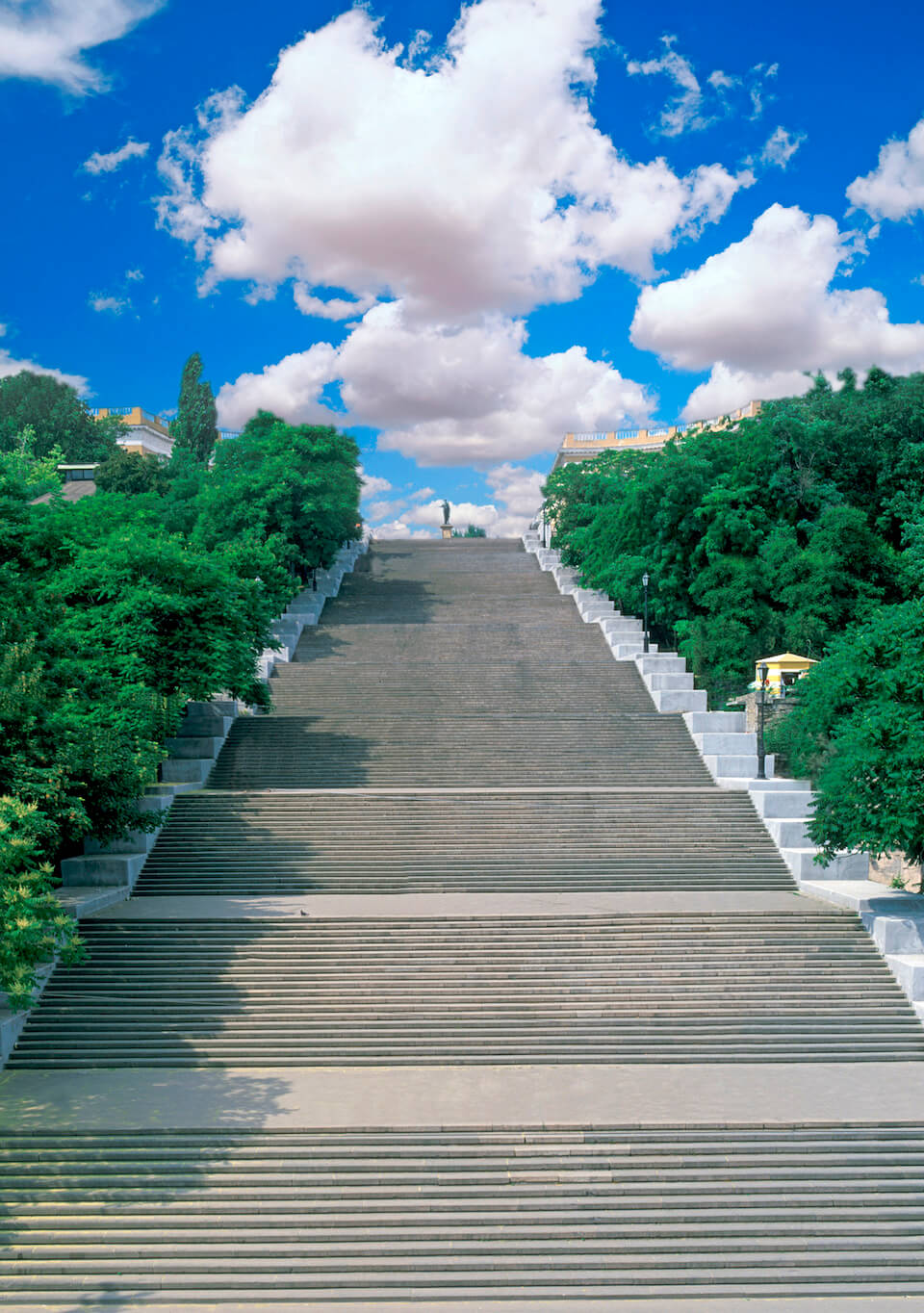 The Potemkin Stairs, as seen from the bottom

The wooden churches in western Ukraine’s Carpathian region are valued for their wooden architecture that incorporates cultural elements from countries neighboring Ukraine. They were registered as a UNESCO World Cultural Heritage in 2013. Also, the urban settlement of Kleven in the Rivne Province is home to a railroad track called the Tunnel of Love. The romantic scenery of the railway enveloped in green on all sides and illuminated by sunlight filtering through the trees has made it a popular location also featured in movies and novels. Another popular tourist destination is the Kamianets-Podilskyi Castle, originally built on Ukraine’s border with the Ottoman Empire and praised as an impregnable fortress. 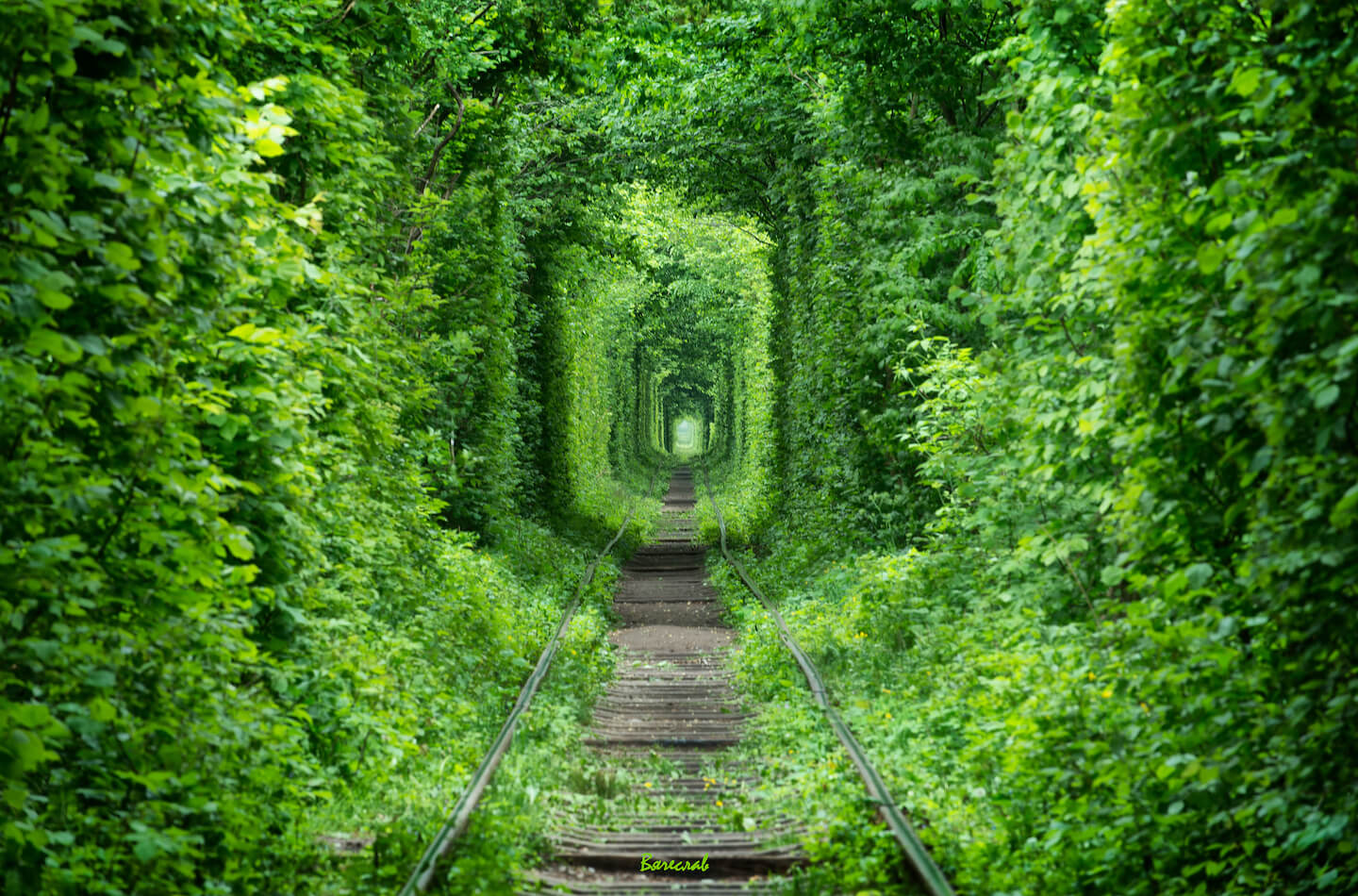 The traditional dress and cuisine of Ukraine

Ukraine’s traditional dress, called a sorochka or vyshyvanka, features detailed embroidery on the sleeves and at the front of the collar. The embroidery serves as a charm to protect the wearer from illness and evil spirits. The dress is also worn at weddings with unique embroidery for nuptial celebrations. On Vyshyvanka Day, the third Thursday in May every year, parades of Ukrainians wearing the beautiful traditional dress are held throughout the country. 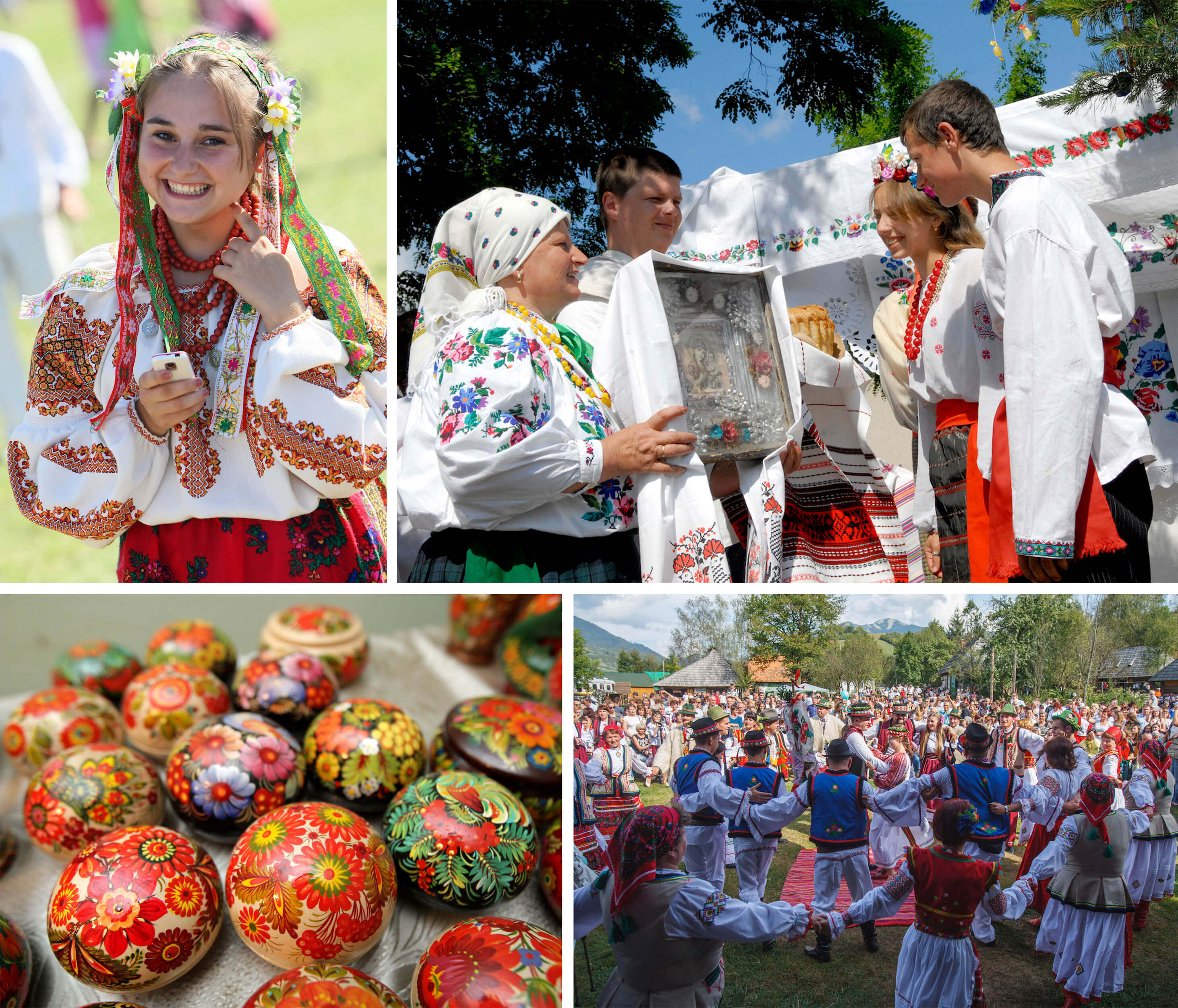 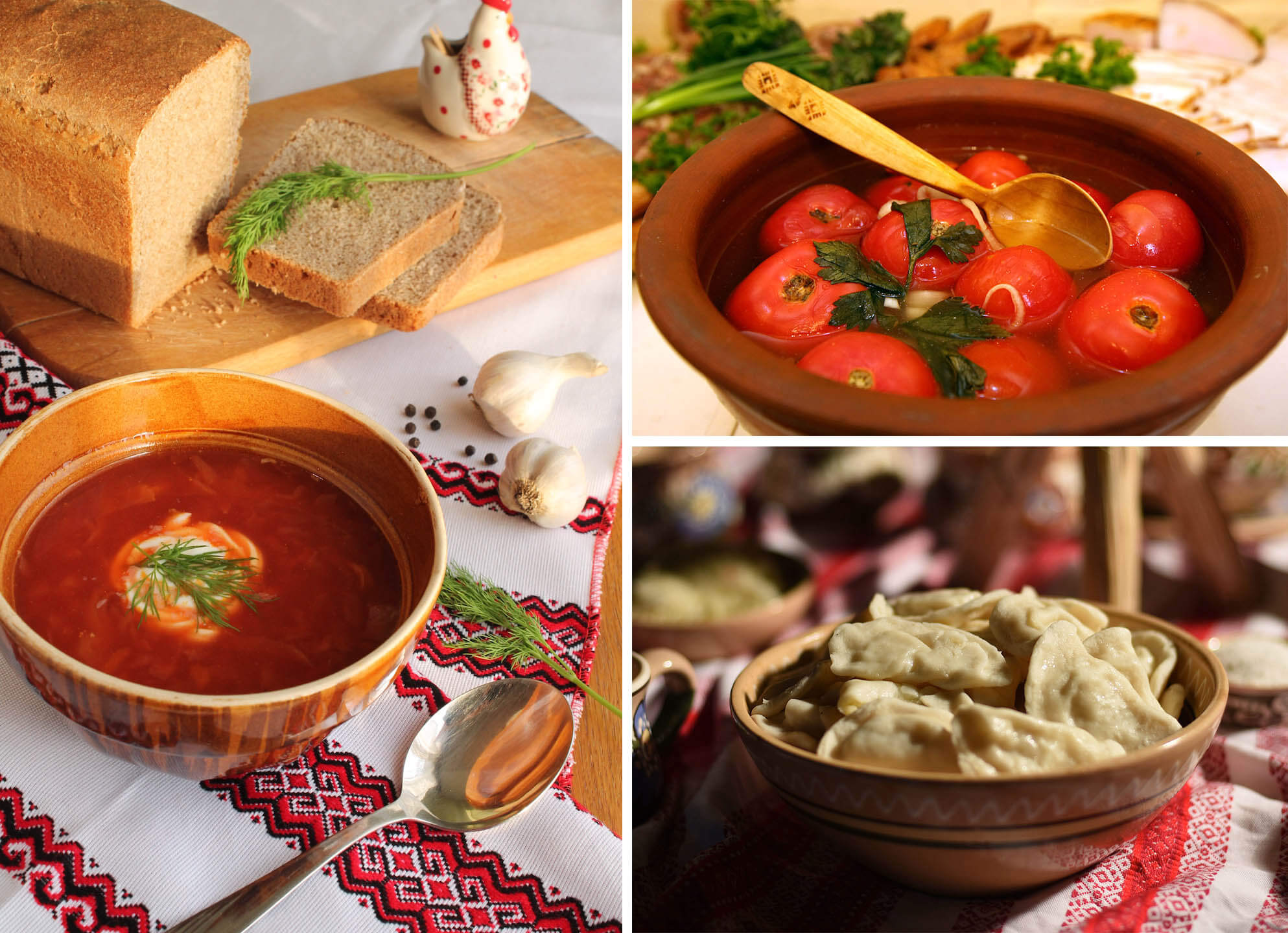 The rich musical culture of Ukraine

The Ukrainian folk dance named Hopak originates in Cossack dancing. This fast-paced, dynamic dance that expresses the spirit of Ukraine is performed in every city and village throughout the country.

In 2000 and 2003, Min-On invited the Pavlo Virsky Ukrainian National Folk Dance Ensemble to perform in Japan. We hope you enjoy the beautiful, multicolored costumes, impressive jumps and skillful dance maneuvers featured in the performance of the Hopak below from 2000.

Next, please enjoy this performance by soprano singer Oksana Stepanyuk from 2018, which features the bandura, a Ukrainian folk instrument.

If I Knew How to Embroider

In closing, we would like to introduce five groups of musicians recommended by the Embassy of Ukraine in Japan.

The Swallow’s Nest, a decorative castle on the Crimean Peninsula in southern Ukraine

(Produced in collaboration with the Embassy of Ukraine in Japan. Photos provided by UKRINFORM, the national news agency of Ukraine, and Ukrainian photographers Viacheslav Prysiazhniuk and Olena Pushkarova.)