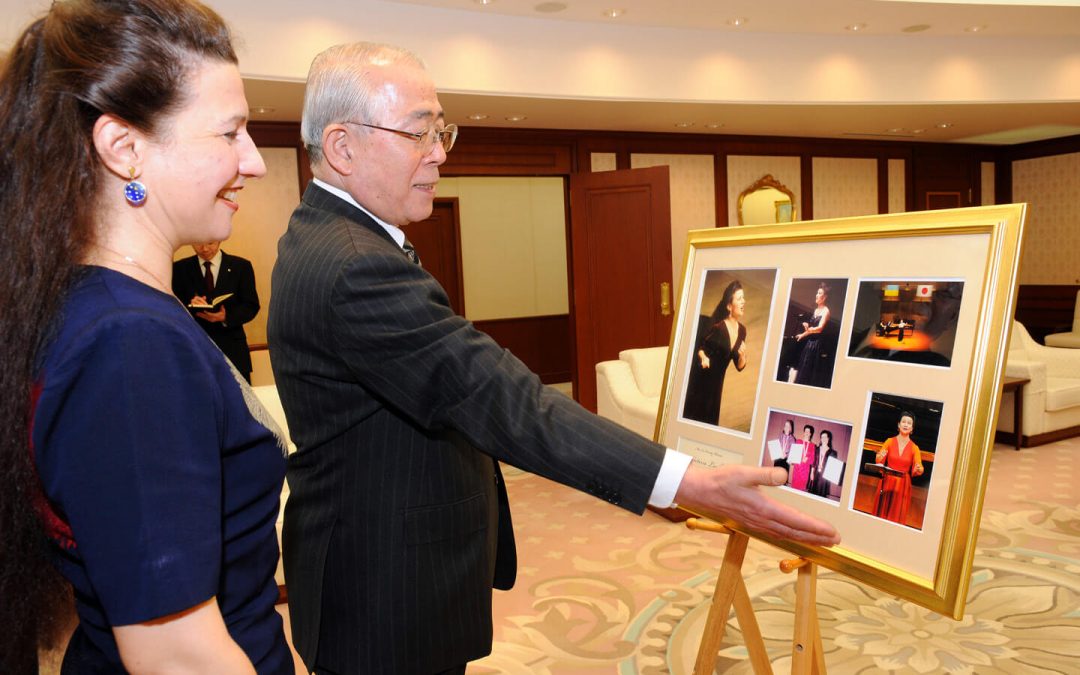 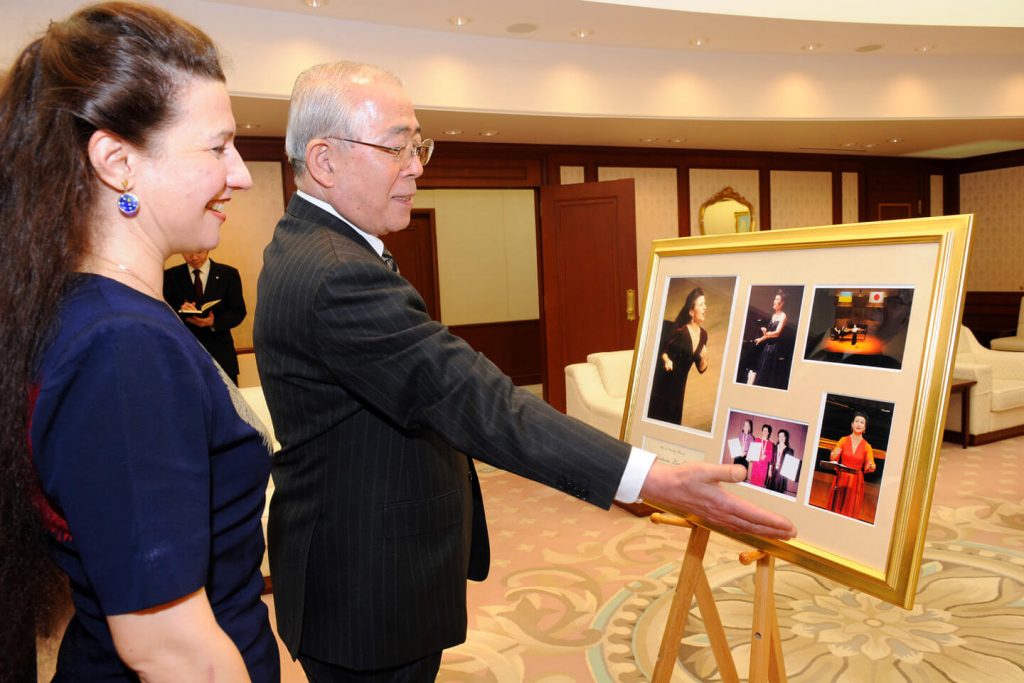 On Saturday afternoon of April 7, the Ukraine-Japan Goodwill Concert—a soprano recital given by internationally acclaimed opera singer Victoria Loukianetz——was held at the Oji Hall in Ginza, Tokyo to commemorate the 20th anniversary of diplomatic relations between Ukraine and Japan. Victoria Loukianetz was born in the Ukrainian city of Kiev and studied vocal performance in the former Soviet Union from the age of 14. She was internationally recognized for the first time as a world-class soprano when she was a prize-winner at Min-On’s Tokyo International Vocalists Competition in 1990. Since her international debut at the Vienna State Opera in 1993, she has been a regular guest at many prestigious opera-houses and international festivals, including the Metropolitan Opera in New York, La Scala in Milan, the Royal Opera House in London, and the Salzburg Festival. Now residing in Austria, Loukianetz has become a favorite of Viennese audiences at the State Opera. The following is excerpted from her dialogue with Min-On President Hiroyasu Kobayashi at the Min-On Culture Center in Tokyo.

Kobayashi: Welcome back to the Min-On Culture Center. We are all very proud that you have developed such a successful career as an internationally acclaimed opera singer, and so happy that we could work together with Ambassador Kulinich of your home country of Ukraine to hold this commemorative concert. Many people still talk about your wonderful performance and how excited and inspired they were by your tremendous voice and beautiful, heartfelt singing

Loukianetz: I am deeply thankful to Min-On. I cannot believe how you organized the concert and prepared all the details perfectly in such a limited time. I really admire the professional but courteous work of your staff. Although I was a little concerned about performing only two days after traveling the long distance from Europe, I am now very proud that I could sing with a strong voice as a winner of Min-On’s vocalist competition, and I strongly feel I could do so because of my prayers and the kindness of your staff.

Kobayashi: This is the picture of you performing at the Min-On vocalist competition in Tokyo 22 years ago. We are very proud of you as the winner of one of our competitions, and that you are now flying high around the world.

Loukianetz: The Min-On vocalist competition was the real beginning of my international career as a singer. Everything started from there. I felt it was the most difficult competition program in the world at the time, and I remember I had to master a minimum of 20 arias in seven different languages as a criterion for participation. What’s more, at that time in 1990, the Cold War had not yet ended and the USSR was in the midst of perestroika. There was no freedom, even among artists. The government agency of the Gosconcert, known as GOSCON in the USSR, controlled all domestic concerts and artists’ activities, including travel abroad. I had to win a domestic competition in order to be able to participate in any international vocalist competitions. Even after I won at the Min-On competition in Tokyo, I did not have the freedom to travel for my singing career, but had to go back to the USSR.

Kobayashi: I did not know you had to go through such difficult circumstances, but because of your wonderful talent and strong heart, you nevertheless built a lasting career as an internationally acclaimed opera singer.

Loukianetz: I was so fortunate, because thanks to winning the Min-On competition, I was able to participate in the International Mozart Competition in Europe a month later, winning first prize there in 1990. And a year later in 1991, I was awarded first prize at the International Maria Callas Competition. But still I had to go back to my country of Kiev after those competitions because of GOSCON’s control, while many other winners from different countries immediately debuted at famous opera houses in Europe. Finally I made my debut performance at the Bolshoi Theatre in Moscow, and from there, I was discovered by a famous opera house manager from Vienna and received an offer to make my international debut as Queen of the Night in Mozart’s The Magic Flute at the Vienna State Opera. I am now a citizen of both Ukraine and Austria, and traveling around the world working at the great opera houses of many different countries. But I am so excited and deeply thankful to be able to come back to my third home country of Japan. I would like to thank you again for my first challenge at the Min-On competition, and I am very happy that, 22 years later, my dream of performing a recital that contributes to both the Min-On Concert Association and my homeland of Ukraine has come true.