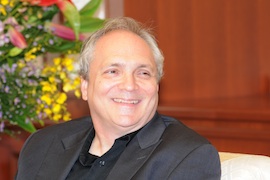 “Jazz is like poetry: I don’t need to think, but just express myself.”

Min-On: This is the first time for you to play a Min-On concert tour. Could you share your impressions of this Japan tour?

Ken Peplowski: I’ve been to Japan on several occasions in the past, but for smaller concerts and club performances. But this is the first time I’ve toured Japan and played in large auditoriums full of people. I was very happy with the quality of the audiences at every venue. They were not particularly jazz fans, but they were all music lovers, so it was a real pleasure to introduce the world of jazz to these audiences. Also, on my visit to the Min-On Culture Center and Music Museum, I was deeply impressed by the work and dedication of everyone at the Min-On Concert Association, as well as the ideas that underpin the organization.

Min-On: Could you tell us how you began your remarkable career in music?

Peplowski: I grew up in Cleveland, Ohio. My father was an amateur musician, and he gave me his clarinet while my brother got a trumpet. When I was in sixth grade, I played in public for the first time, and together with my brother, joined a local professional polka band. Of course, as a kid, I was happy to make some money, but more than that, I really loved to play music for people, and I realized that I wanted to play for a living. This year marks the 40th anniversary since my professional debut in the polka band.

Min-On: Many people have complimented you on your virtuosity. Have you had a particular mentor to nurture your amazing talent in playing this difficult instrument?

Peplowski: Although I was young when I started playing in the polka band, that professional environment became a great music school for me: that’s where I learned to improvise over chord changes and other techniques. It’s just like learning to swim by being thrown into the water. When I was in high school, besides the professional band, I played in a school jazz band and jazz gigs around town, as well as teaching at the local music store. I loved the instrument and was proud to play clarinet all the time. After attending college for a year, I joined the Tommy Dorsey Orchestra in 1978, which at that time was directed by Buddy Morrow. Buddy asked me to play not only clarinet but also lead alto, and while in the band, I met the great tenor saxophonist Sonny Stitt. He really inspired my playing of the tenor sax, and tours of the orchestra became a great road-school.

After I settled in New York, Benny Goodman came out of retirement to put together a new big band, and in 1984, Benny personally auditioned and hired me as a tenor saxophonist. He was extremely strict in rehearsals, but he was as demanding of himself as he was on us. I think my friend and I were the only guys not to get fired at least once during the lifetime of that last band. I played tenor, while absorbing Benny’s genius on clarinet. Naturally, I deeply respect him as a clarinet legend, and indeed, Benny Goodman was a great influence for me.

Min-On: Lastly, could you share your thoughts on music?

Peplowski: I love jazz, but actually I love all kinds of music. I would say that music is my life. Jazz is like poetry: I don’t need to think, but just express myself. In a sense, that is improvisation. We can communicate with each other and unite through music. I would like to find more opportunities for young people to learn how to develop themselves, and how to bring out their own best qualities through music. And I sincerely hope that organizations like Min-On will contribute to providing young people with these opportunities.