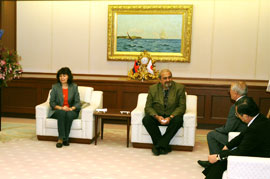 Dr. Pogosyan and his wife meet with Min-On officials

Representing the Embassy of the Republic of Armenia in Japan, Dr. and Mrs. Grant R. Pogosyan, advisor and acting head of mission, accompanied by Dr. Arsen Arakelyan, the interim Charge d’affaires, visited the Min-On Culture Center for the first time on May 27. Dr. Pogosyan has also served as a professor and dean of the graduate school at the International Christian University in Tokyo, and has undertaken various activities in Japan over many years to help establish firm diplomatic and economic relations between Japan and Armenia.

After hearing an explanation of Min-On’s founding principles and history from Min-On President Hiroyasu Kobayashi, Dr. Pogosyan—speaking fluent Japanese—remarked, “There is no greater goal of humanity than living together in peace. And that goal will only be reached if mutual understanding and respect can be achieved between people of different nationalities. I completely agree with the thinking behind Dr. Ikeda’s founding of the Min-On Concert Association, and genuinely admire Min-On’s activities of promoting cultural exchange with so many different countries. Indeed, there is a great need right now in this difficult age of globalization.”

In the course of discussions about music, he shared his experience of friendship with students from various countries through music club activities while he was a student at Moscow State University, and reiterated the importance of Min-On’s mission in taking a leadership role in promoting music culture. In response to Dr. Pogosyan’s comments, President Kobayashi proposed inviting the Armenian Little Singers—a group that, by coincidence, Dr. Arakelyan had helped found—to tour Japan in 2012 with the aim of strengthening the bonds of friendship between the two countries through the opportunity for cultural exchange.