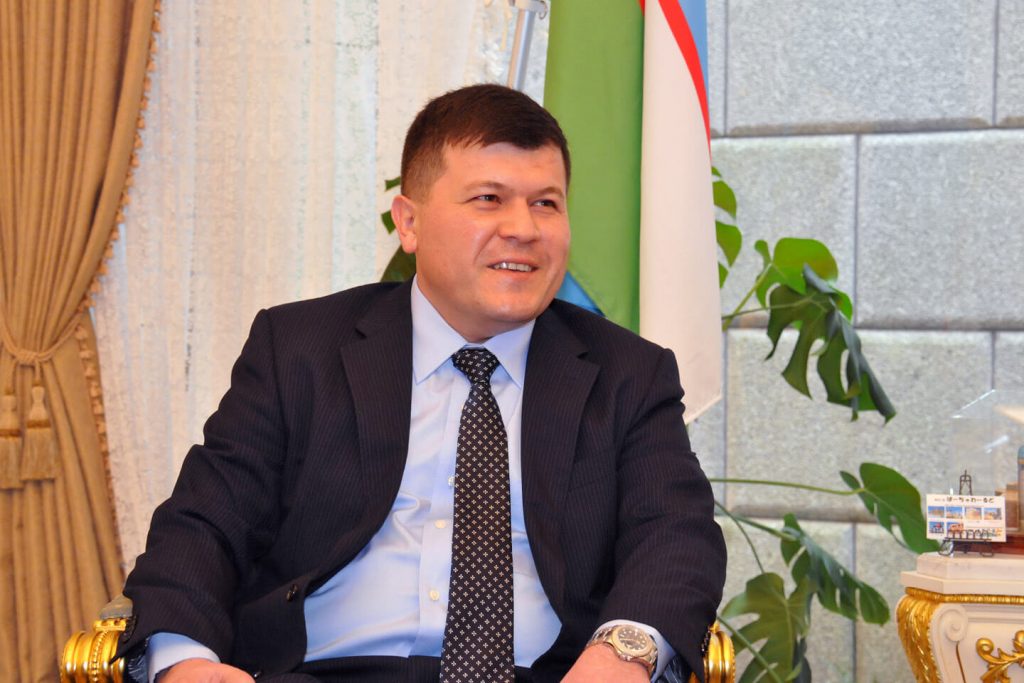 Interview with H. E. Farrukh Tursunov, Ambassador of the Republic of Uzbekistan to Japan

Uzbekistan, a Central Asian country situated at the crossroads of the ancient Silk Road trade routes, has played a pivotal role in cultural exchange between Eastern and Western civilizations while developing a diverse national culture. Min-On’s history of cultural exchange programs with Uzbekistan dates to 1976, when Uzbek folklore artist Izmailova Galiya Bayazitovna of the former All Soviet Union Folk Dance Ensemble was invited to tour in Japan. The following year, in 1977, Min-On dispatched the Silk Road Musical Folklore Research Teams to study music and dance culture in Middle Eastern and Asian countries along the Silk Road, including Uzbekistan. Based on the research results, Min-On initiated a cultural exchange concert series entitled A Musical Voyage Along the Silk Road. The Folklore Ensemble of Uzbekistan occasionally joined the series, which brought musicians and artists from many Silk Road countries together onstage in Japan for collaborative performances. Recently, we were able to interview Ambassador Farrukh Tursunov from the Republic of Uzbekistan.

Min-On: First of all, please tell us about your country’s famous music festival “Sharq Taronalari.”

Ambassador Tursunov: “Sharq Taronalari” was established as the International Music Festival of Uzbekistan in 1997 at the initiative of President Islam Karimov. Since then, it has been held every two years in the city of Samarkand, gaining wide popularity under the support of UNESCO. The program of “Sharq Taronalari” includes traditional music competitions with many participating countries, as well as scientific and practical conferences with musicologists, composers and performers. The first festival, held in 1997, drew participants from 31 countries. Today, “Sharq Taronalari” has become an internationally significant music festival not only for Uzbekistan and Central Asia, but for the whole world, with representatives from 67 countries in this year’s festival. Representatives from Japan have participated in “Sharq Taronalari” every time, including a group of shakuhachi artists in 2013 and nagauta and shamisen performers in 2015, delivering wonderful performances of traditional Japanese music. Music is universal, uncontained by national boundaries and transcending historical and political differences. Based on that idea, President Karimov has promoted “Sharq Taronalari” to deepen mutual understanding among many countries of the world. Uzbekistan is a major junction of the ancient Silk Road trade route connecting the East and West, and we’ve had an understanding and respect of the cultures and traditions of other countries. Throughout our nation’s history, we have engaged in peaceful exchange with many other countries, and in that sense, the “Sharq Taronalari” music festival is an extremely significant event for our nation. This year marked the 10th occurence of the festival, and we were able to welcome President Kobayashi of the Min-On Concert Association. I am very pleased he delivered a speech at one of the conferences. Moving forward, I sincerely hope that through this music festival and other exchange activities between our two countries, Japanese people will further deepen their understanding of Uzbekistan, and vice versa. Min-On: Please briefly introduce your country for our readers.

Ambassador: There are many ancient cities in Uzbekistan with great historical value. Especially, the historic areas and ancient city centers in areas such as Samarkand, Bukhara, Khiva and Shakhrisyabz are famous as World Heritage Sites recognized by The United Nations Educational, Scientific and Cultural Organization (UNESCO). These areas and cities have over 2,000 years of history, and include more than 7,000 sites of ancient medieval structural remnants, still standing. Also, Uzbekistan is full of natural beauty, including lakes and mountains, where people can enjoy sports and rock climbing. Eco-tourism is a fast-growing trend as an active form of recreation here. Medical tourism has also been attracting more and more people domestically and internationally to resorts for various medical treatments in a refreshing atmosphere. There are even beautiful ski resorts in Uzbekistan, and one of those resorts, called Chimgan, reminds me of the scenery of Hokkaido, Japan. Many well-maintained golf courses are also available. Uzbekistan is a country that people of all age groups can enjoy. It is a fascinating and beautiful country along the Great Silk Road, a crossroads of Eastern and Western cultures. I really hope that more Japanese people will be able to visit and enjoy Uzbekistan. 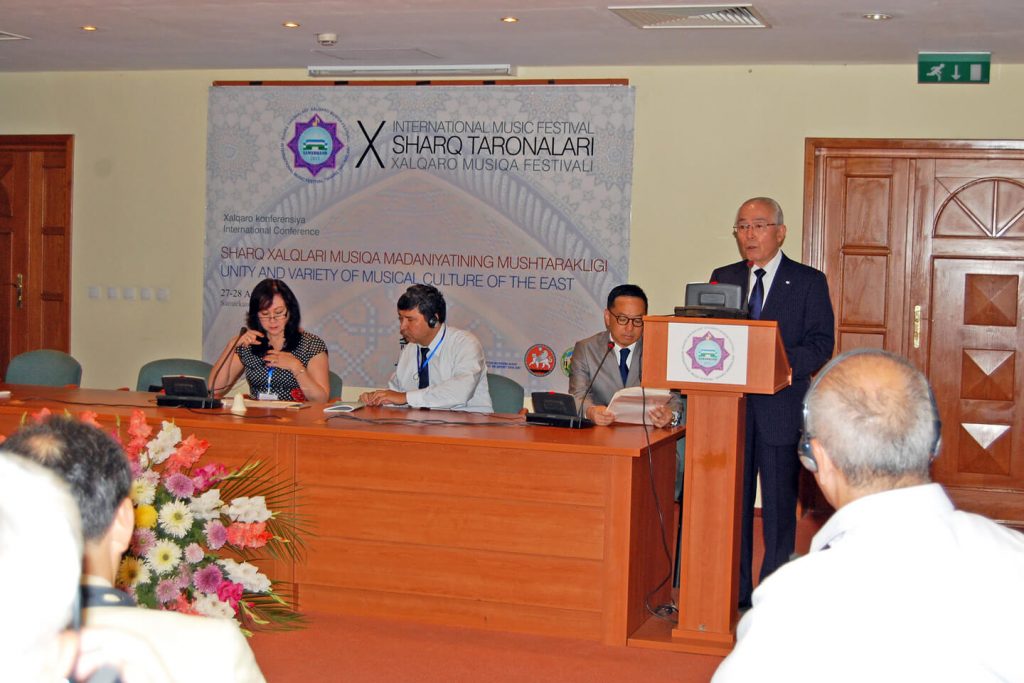 Ambassador: I deeply admire the last 50 years of contributions by the Min-On Concert Association. Thousands of musicians and performing artists from around the world have been introduced onstage in Japan, promoting international cultural exchange and mutual understanding. In particular, I was greatly inspired to hear about Uzbek artists being invited to Japan by Min-On in the era of the former Soviet Union, in 1976. This is solid proof that the world of music is borderless, and even if there is a great wall standing between countries, the power of music will overcome it. I believe your association has accomplished highly valuable work, promoting the global exchange of musical culture through inviting and dispatching musicians and artists worldwide. You have fulfilled the very significant mission of deepening mutual understanding and strengthening friendly relations amongst people of the world. In the past six opportunities for cultural exchange between our two nations through Min-On’s programs, the traditional music and folk dance of Uzbekistan has been introduced to Japanese audiences, and I think Japanese people have discovered some cultural commonalities between Japan and Uzbekistan. As the ambassador of Uzbekistan to Japan, I have had the opportunity to visit many cities across Japan. I have been inspired to discover that each area has its own unique folk music and performing arts tradition. Uzbekistan has 12 states, and each area has folk music and dance unique to that area. I strongly hope, working together with the Min-On Concert Association, that we can introduce the diverse cultures of Uzbekistan to more Japanese audiences. Your association’s activities are very important and beneficial to the whole world. I look forward to the further achievements and success of the Min-On Concert Association.