Jazz is a Dialogue Celebrating the Joy of Life 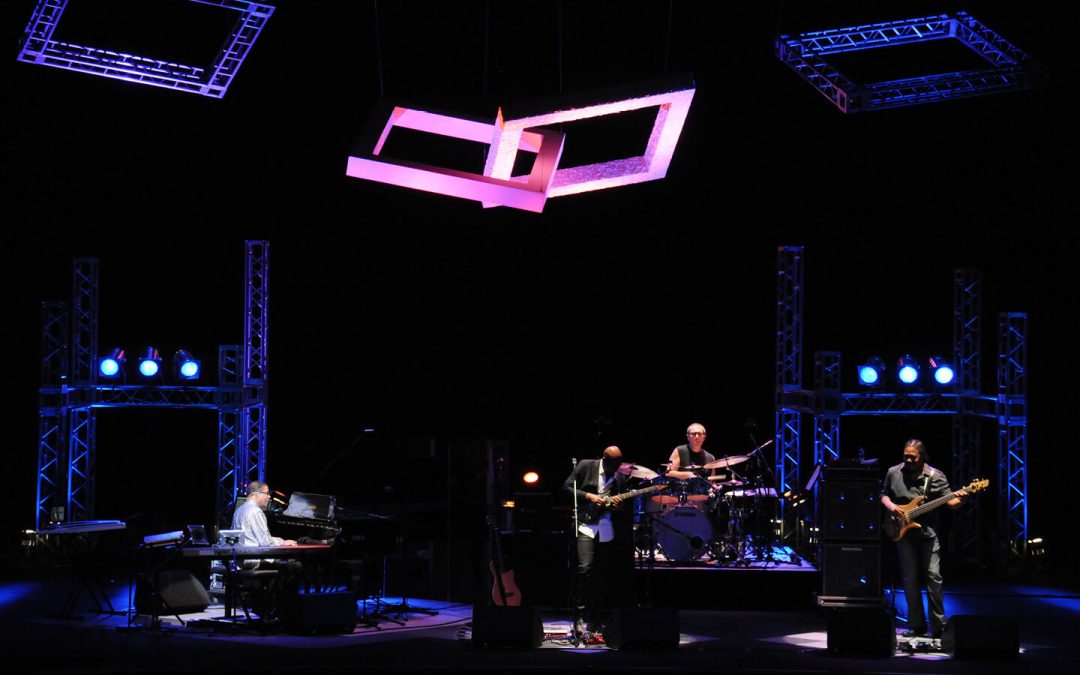 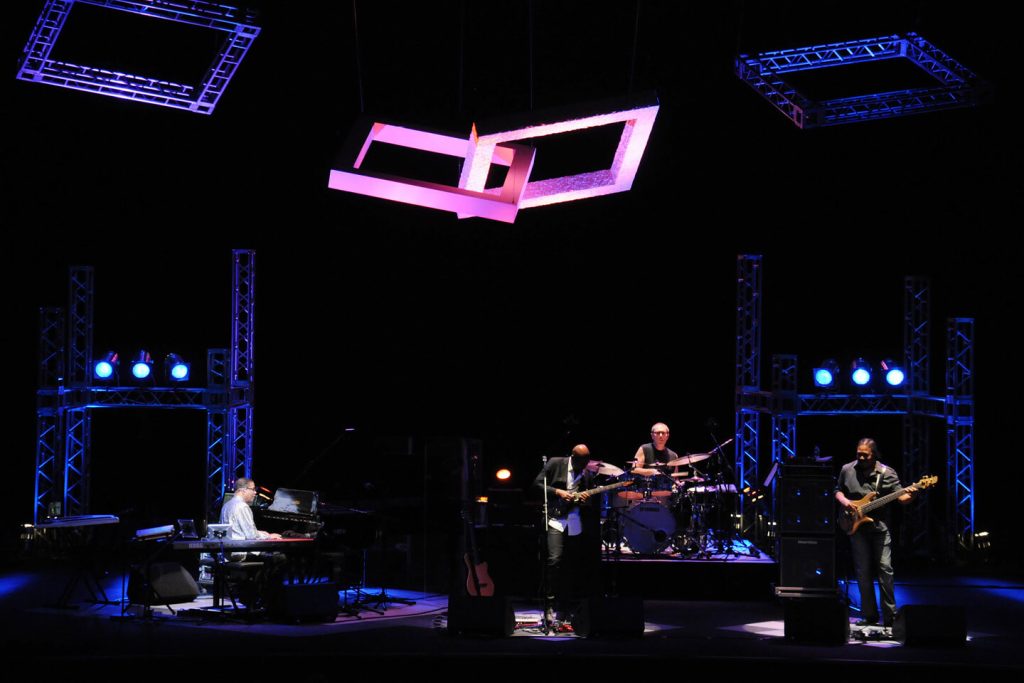 Herbie Hancock and his band on stage in Tokyo

“Jazz is a music that depends on dialogue . . . Jazz is also a very spiritual music. The dialogue that happens within the performance of the music is not frivolous or casual. The dialogue embodied in jazz is very serious, even when it’s playful. In many ways, it’s a celebration of the joy of life. It’s a cry issued from the depths of human emotion.” These words are from the legendary composer, pianist and keyboard pioneer Herbie Hancock, recipient of an extraordinary 14 Grammy Awards and a UNESCO Goodwill Ambassador for his dedication to the promotion of peace through dialogue, culture and music.

Celebrating 50 years of the Min-On Concert Association working to promote the global exchange of musical culture with the aim of developing international friendship and peace, this jazz legend was invited to Japan with his quartet of internationally celebrated jazz musicians—Vinnie Colaiuta on drums, James Genus on bass, and Beninese rising star Lionel Loueke on guitar—for a four-city concert tour taking in Hiroshima, Nishinomiya, Nagoya and Tokyo during the beautiful autumn season in Japan.

Hancock was one of the first jazz pianists to embrace electronic keyboards and synthesizers, and was an early adopter of the vocoder (a device that allows the player to modulate the sound of a synthesizer by means of his or her voice). Indeed, he has spearheaded almost every development in electronic and acoustic jazz, fusion, hip- hop and R&B in the stream of modern jazz during the last decades of the 20th century and into the 21st.

This Japan tour of Hancock’s latest quartet, in which various synthesizers and other computer-based music technologies were played alongside acoustic instruments, including a beautiful Fazioli concert grand piano, concluded on November 6 at Shibuya Bunkamura—Cultural Village Orchard Hall in Tokyo in front of a capacity crowd of jazz devotees and music lovers. The concert featured some of his classic compositions, including Watermelon Man, Cantaloupe Island, and Chameleon, yet probably more than 90 percent of the entire performance comprised spontaneous improvisations in which Hancock and the other musicians on stage interacted with and played off each other in a dazzling display of virtuoso musicianship. In a very real sense, these flights of improvisation could be thought of asadialog—notjustbetweenthemusicians on stage, but between the musicians and the audience, a dialogue on the powerful impetus to build common ground, for mutual respect and wonderful relationships between people of diverse backgrounds, ethnicities, and races.

Expressing the Sanctity of Life Through Music

The following are excerpts from “Jazz and Black Culture,” chapter one of Min-On Founder, SGI President Ikeda’s dialogue series with jazz legends Herbie Hancock and Wayne Shorter titled “Soul Freedom: Jazz, Life and Buddhism,” of which the original text in Japanese appears in the Oct. 9, 2010 issue of the Seikyo Shinbun newspaper.

Min-On Founder Daisaku Ikeda: Music connects hearts. It opens people’s lives. Unrivaled in its ability to instantaneously transcend all kinds of differences, music creates a unity of spirit and enriches one and all. When I met the world-renowned violinist Yehudi Menuhin, he recalled his impressions of the great continent of Africa. Mr. Menuhin remembered hearing the sound of drums reciprocating one another’s rhythms among distant hilltops. He told me that this drumming was the exchange of evening greetings between good friends. In this way, the power of music resonates from one life to another to unite people with a rich, romantic and vital sense of freedom and generosity.

The American-born Menuhin sometimes performed with jazz musicians. He told me: “No matter how trying the times, music continually offers us encouragement and gives us strength. This is even true when music comes from a profoundly deep place.”

Herbie Hancock: Thank you. I believe that music plays a powerful role in illuminating the dignity of human life. Songs are a melding of music and poetry. Words are a means for us to express ourselves. We can also use them to acknowledge and protect the dignity of human life. But music offers much more freedom than language. Nothing stands in the way of music, so it can transcend language. Music is universal, while languages may be bound by national borders.

Wayne Shorter: I know exactly what you mean. I have also experienced the power of music to overcome national boundaries. Last year, we were asked by the U.S. State Department and the mayor of Los Angeles to go to Mexican city of Guadalajara. It is a time of instability and uncertainty in Mexican society, and many in the audience told us that our performance helped lift their mood and made them happy.

The audience was wildly enthusiastic about our modern jazz performance, and we ended up playing five encores. The person who had arranged our visit seemed quite proud. Her expression seemed to say, “This cultural exchange was a magnificent idea!”

Herbie Hancock: African Americans may have had the trappings of their traditional cultures stripped from them, but no one could destroy the heart of their culture. This cultural core was the source of the blues, gospel music and jazz.

Although jazz originated in the African American experience, white musicians immediately began to play it, too. This meant that jazz was a kind of music that could express poetry of life. It revealed the ability of the human spirit to poetically express hardship and the feelings of the heart. It showed that the rhythms of jazz resonated in the hearts of all people.

Wayne Shorter: In that sense, the process that gave rise to jazz probably existed even before the appearance of slavery—that is, the idea that when slavery of any form, during any period, takes away the language of the enslaved, expression finds another path. This reminds me of the phrase “life finds a way” in the movie Jurassic Park. No matter the system of slavery or how it inhibits human expression, an alternative means of expression will always be found as an outlet for the creative impulse.

Founder: Yes, that’s true. It illustrates the profoundly dynamic principle of all life—that is, the symbiosis between challenge and response, between adversity and development, and between hardship and creativity.

One does not make rapid progress in life by sitting idly and enjoying favorable circumstances. Whether it is an individual, an organization, an ethnic group or a culture, it is in the midst of enduring extreme pressure and fighting back with all one’s might that one achieves true progress in life. Those with an indomitable spirit who face adverse circumstances and overcome hardships proudly are able to raise their voices in a thunderous cheer of victory. I would say that jazz represents this celebration of the human spirit.