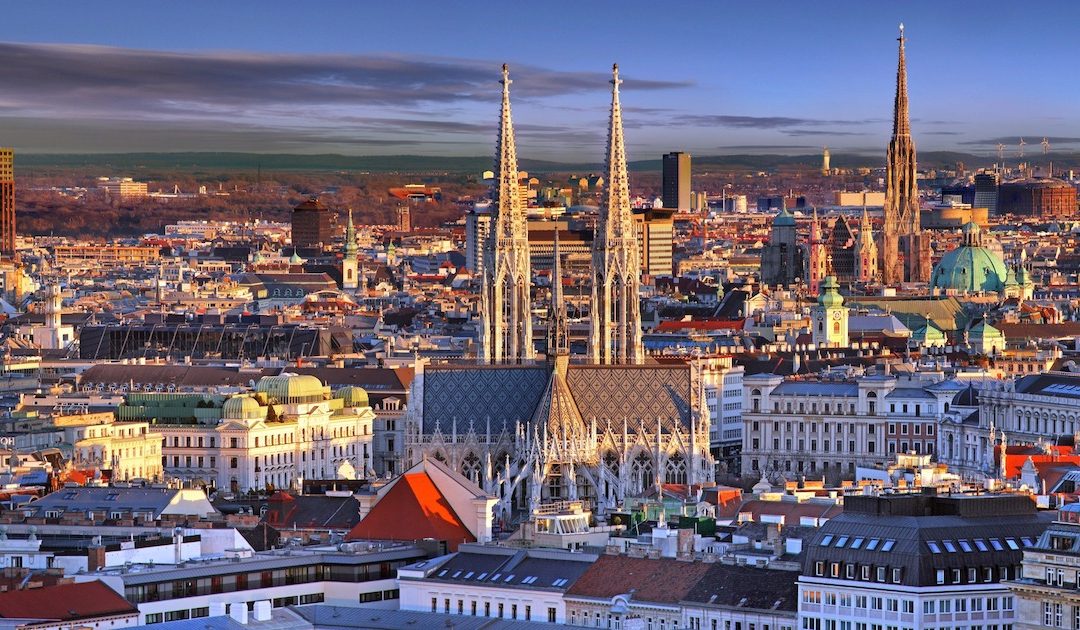 The Alps mountain range covers about two-thirds of Austria’s land area, while lush forests also cover about half of the country. Austria has nine states with starkly diverse, rich regional cultures, and the eight surrounding countries of Germany, Switzerland, Italy, the Czech Republic, Slovakia, Hungary, Liechtenstein and Slovenia have also influenced the Austrian states in nearest proximity to them.

Vienna, the city of music

In the 18th century, Vienna served as the capital of the Habsburg Empire and was filled with dignified, noble music. People from every social class enjoyed concerts and operas, from the emperor and nobility to common citizens. Vienna became the music capital of the world, and droves of young aspiring musicians set their sights on the city. Many legendary musicians developed their talents here and composed many masterpieces renowned in music history.

The Ringstrasse, or Vienna Ring Road, opened in 1865 and circles the Innere Stadt (Inner Town) part of the city. This area includes many historic buildings, such as The Hofburg (former imperial palace), Belvedere Palace, theaters, churches, universities, museums, Vienna City Hall and the Austrian Parliament Building.

St. Stephen’s Cathedral towers prominently over the skyline in the middle of the historic district. This building is a testament to Vienna’s rich history and was also Mozart’s wedding venue. The cathedral’s south tower is 136 meters tall, the third tallest in the world at time of completion in 1386, after 65 years of construction. 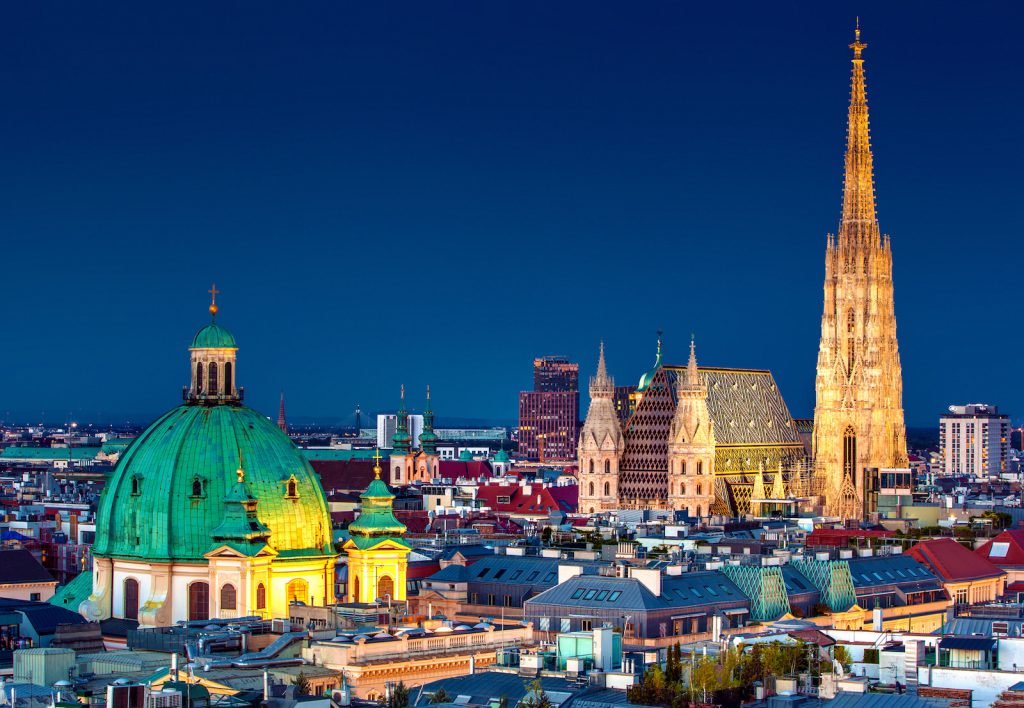 The Danube River spans about 2,860 kilometers from the Schwarzwald mountain range in Southern Germany to the Black Sea. The 35-kilometer section of the river in Austria between Melk and Krems was registered as a World Heritage Site in 2000, named the Wachau Cultural Landscape. It is famous as the most scenic part of the Danube river by boat, thanks to riverside landmarks like Melk Abbey and Aggstein Castle, as well as acres of vineyards on both banks. 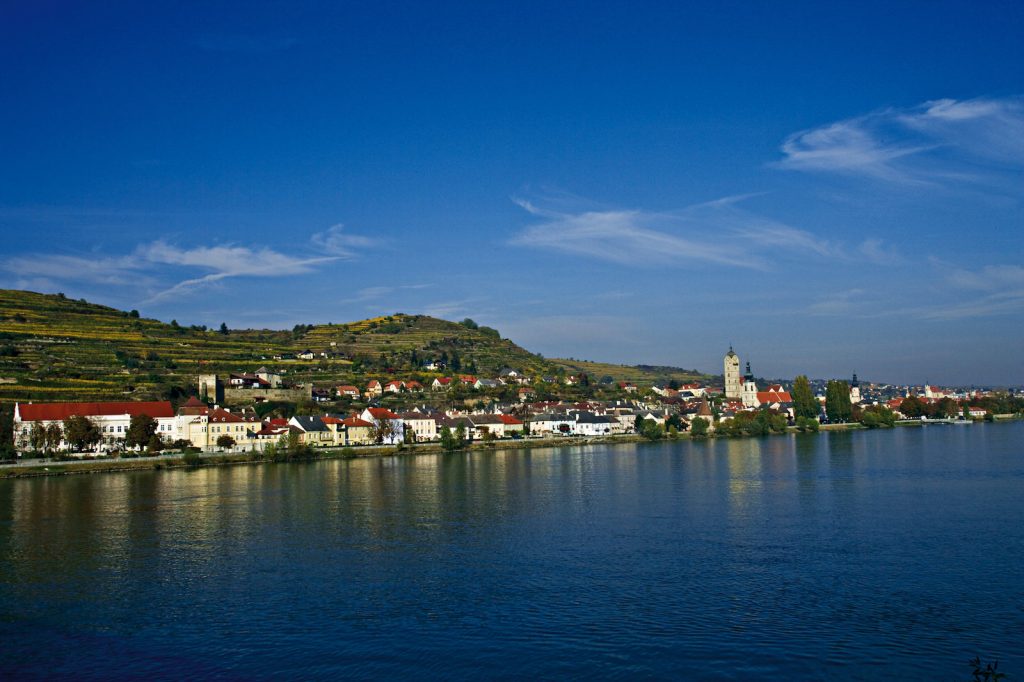 Please enjoy this performance of The Beautiful Blue Danube by the Strauss Capelle Vienna from their concert at Min-On in 2004, set against the scenic backdrop of the Danube River flowing peacefully through the lush green countryside.

The Straus Capelle Vienna orchestra was founded in 1827 by Johann Strauss I and his family. It boasts a rich tradition and was one of the world’s best in the mid-1800s. Although it dissolved in 1901, members of the Vienna State Opera Orchestra and Vienna Volksoper Orchestra revived Straus Capelle Vienna 76 years later, and it survives to this day. The orchestra’s signature red and white uniforms come from the orchestra’s golden age during the reign of Emperor Franz Joseph I.

The Min-on Music Museum houses many classical pianos built in this era of Vienna for visitors to enjoy.

Graz, a cultural leader in Europe 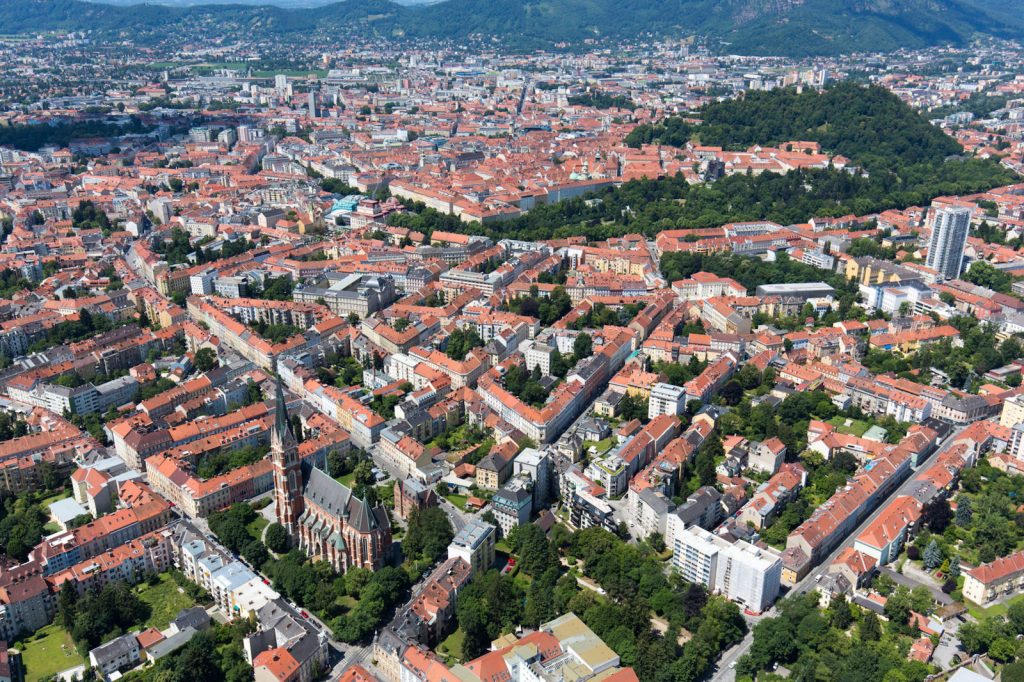 Graz, known as “Austria’s southern beauty,” is its second largest city and the capital of the state of Styria (Steiermark). It is also one of Europe’s most culturally important cities, home to both the Graz University of Music and Performing Arts and the University of Graz, the latter of which has a 400-year history. Many industries hold international trade fairs and conferences here, and travelers flock to Graz for its famous cuisine. The historic center, named “City of Graz – Historic Centre and Schloss Eggenberg,” is filled with beautiful red-roofed rowhouses. The area was registered as a World Cultural Heritage Site in 1999 for its excellent maintenance and preservation. UNESCO added the Eggenberg Palace on the outskirts of the historic district as part of the site in 2010. Graz hosts an annual event called the Long Table of Graz, where local chefs serve top regional wines and superb culinary delights to guests against the magical backdrop of the Schlossberg, clock tower and town hall in the historical district. Visiting gourmands have nicknamed Graz “The Culinary Capital.” 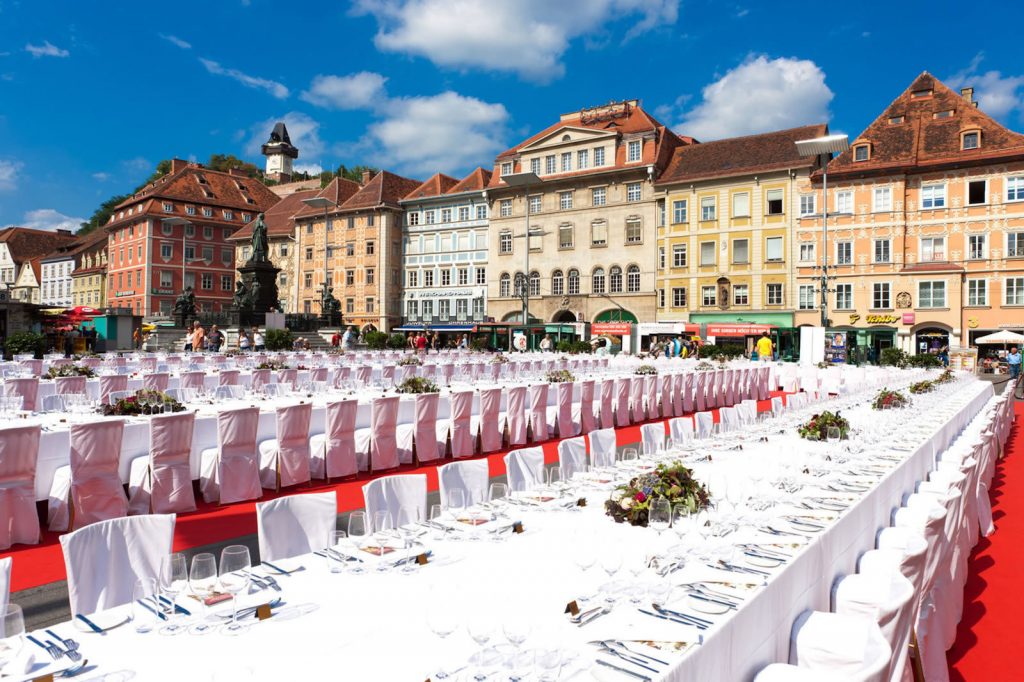 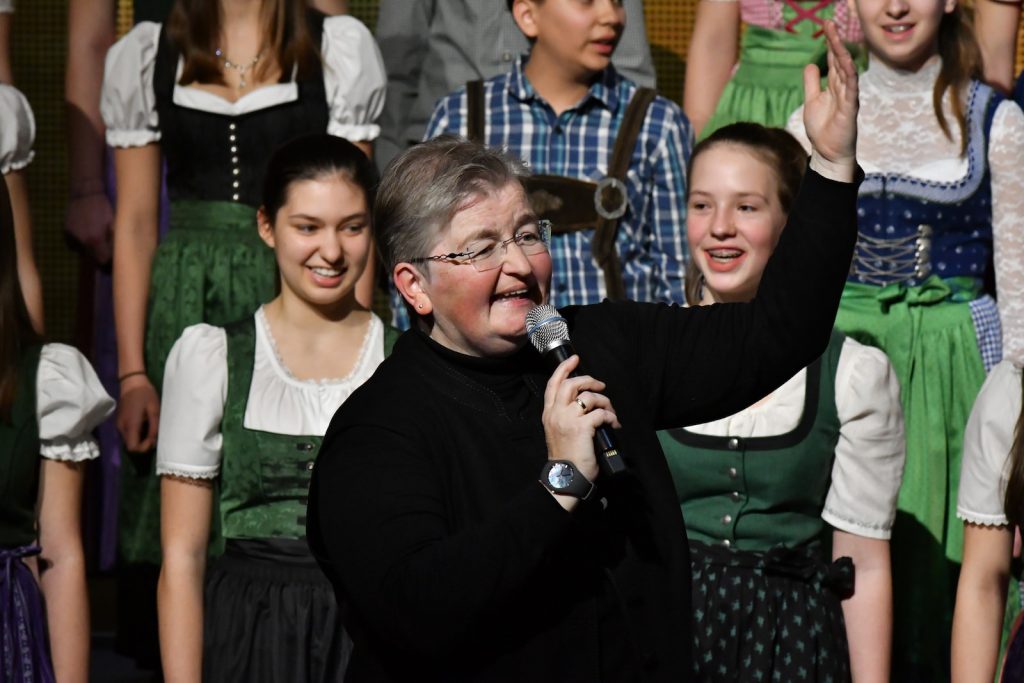 The HIB Liebenau, one of Austria’s most historic college preparatory high schools, established the Singakademie Graz choral academy to provide vocal music education to its students. They have won many international choral competitions, and in 2018, the choir won two gold medals at the World Choir Games.

Maria Fürntratt serves as the choir’s artistic director. She is an accomplished choral music instructor who has won many teaching and other musical awards. She also serves as judge in many choral competitions.

Please enjoy the beautiful voices of Singakademie Graz in these songs from their concert at Min-On in January 2020. 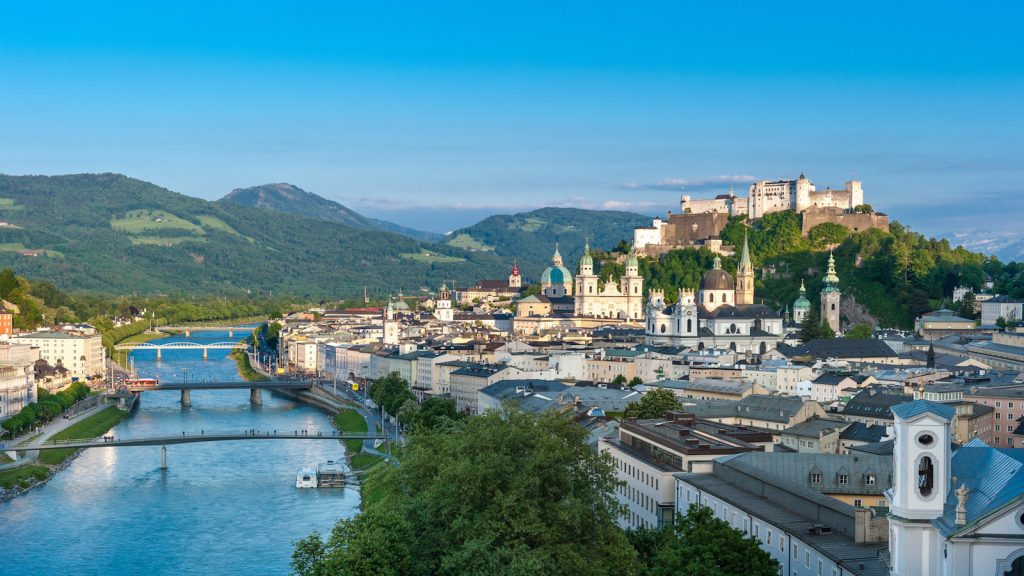 Salzburg, birthplace of the prodigy Mozart

Salzburg is famous as the birthplace of Mozart. His home has been converted into memorial museum displaying historic items like his favorite violin and famous autograph. It’s a must-see for visitors. The Salzburg Music Festival, a summer tradition for the city, has grown over the years into a massive, world-famous music festival. The festival’s motto is, “The entire city is a stage,” and the Vienna Philharmonic Orchestra and other renowned opera troupes, orchestras and musicians gather to perform here every year. The festival celebrated its 100th anniversary in 2020. 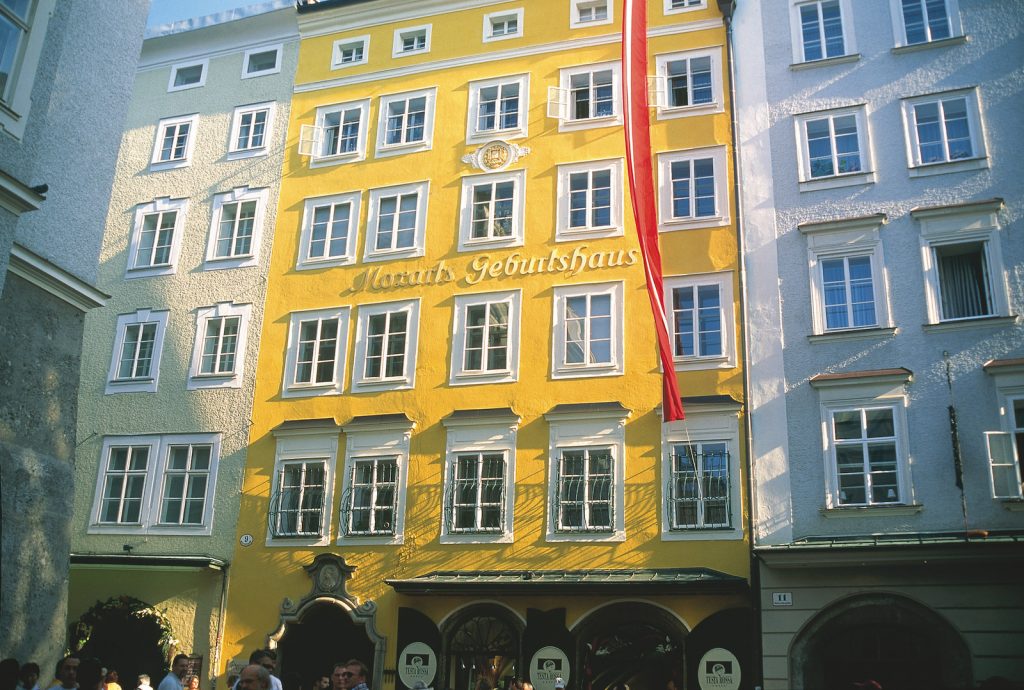 On the night of December 24, 1818, the congregation of a church in Obendorf, a town north of Salzburg, first sang a certain Christmas hymn now heard every year across the globe: Silent Night. Although the original church was destroyed, the town built the Silent Night Chapel on the same site, now a very popular site for visitors. Today, people across the globe fondly sing this hymn in over 300 languages. 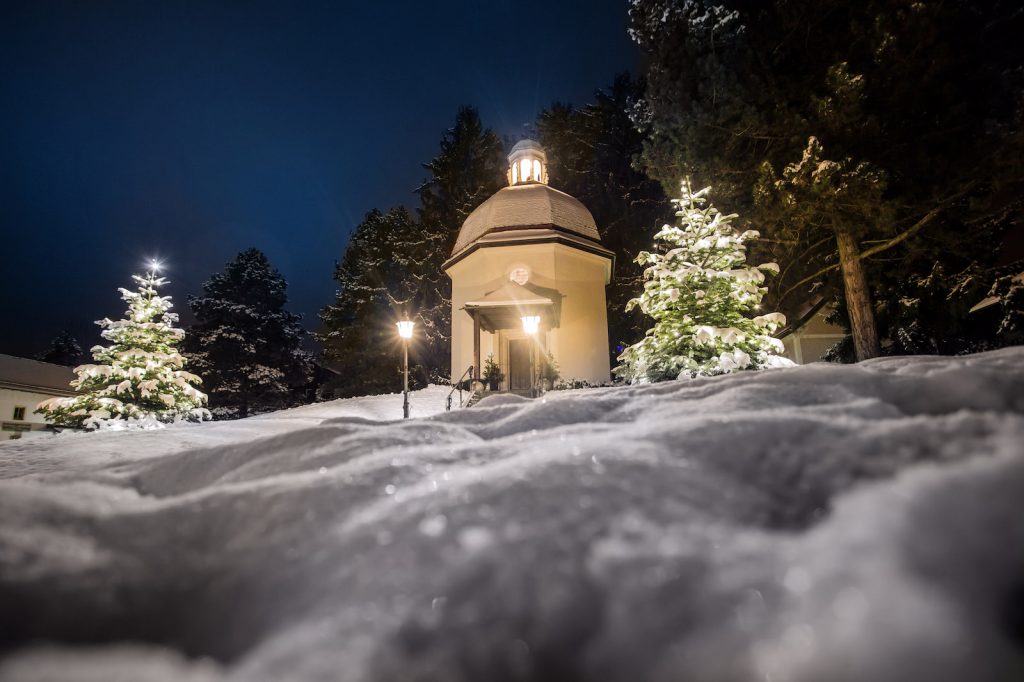 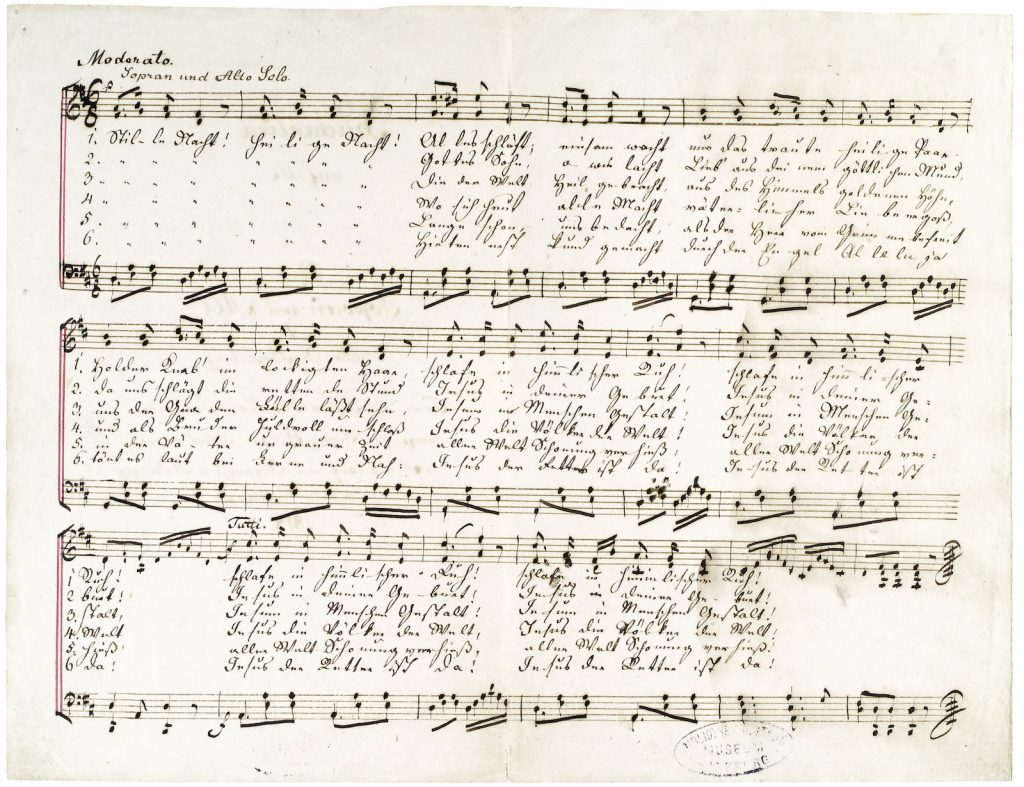 The region to the east of Salzburg, Salzkammergut, is filled with lakes and surrounded by the majestic Alps. It was formerly known for mining the once-rare mineral, salt (salz), and the nobility directly controlled the region as an imperial estate (kammergut). The gorgeous lakeside town of Hallstatt, set against the 2,995 meter-high Dachstein Mountains, was registered as a UNESCO World Heritage Site named Hallstatt-Dachstein/Salzkammergut Cultural Landscape in 1997.

Swarovski is well-known as a world-leading jewelry brand. Founder Daniel Swarovski invented a precise glass-cutting technique and established the Swarovski company in 1895 in Tyrol, Austria. His vision was to make “a diamond for everyone” using crystal. In 1995, the company opened Swarovski Crystal Worlds in the state capital of Innsbruck to celebrate the 100th anniversary of its founding. The facility has become a famous attraction in Tyrol, welcoming over 12 million visitors to date. 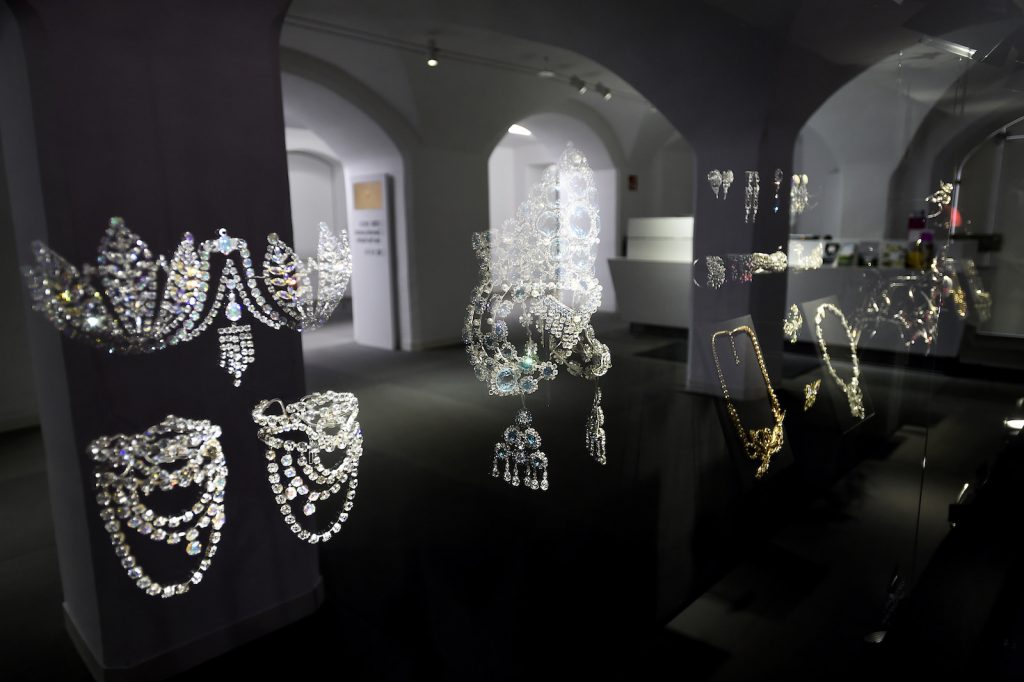 Outstanding music, from classic to contemporary

Min-On would like to feature a few pieces performed by some of the many Austrian artists we’ve had the pleasure of hosting.

First, please enjoy the Vienna Strauss Kapelle’s 2004 performance of Enthusiastic Galop. A galop is a piece of music played for skip-like dances that imitates the rhythm of a running horse. Golnar Shahyar and Mahan Mirarab are two Iranian musicians currently living in Vienna, Austria. They have been performing as Golnar & Mahan since 2011, and are highly acclaimed even in the prestigious music city of Vienna. The group also performs as a diverse trio with the addition of percussionist Amir Wahba.

The New Austrian Sound of Music – in short NASOM – is a long-term sponsorship program by the Austrian Federal Ministry for European and International Affairs (BMEIA), promoting young emerging Austrian and Austria-based bands and musicians performing abroad.

The aim of NASOM is to offer biennial support for international performances of promising young talents with the help of a global network of embassies, cultural forums and consulates. A further objective of NASOM is to draw more attention to the fact that Austrian music creation – beyond the traditional – is as vibrant, modern and culturally diverse as ever.

The groups At Pavilion, Pneuma, Purple is the color, Selini Quartet and Tribidabo are part of the NASOM 2020/2021 edition.

At Pavillion was formed in 2010, branching out beyond rock music to develop a unique style inspired by classic films from the 1970s and 80s. Their upbeat songs are filled with funky rhythms reminiscent of a disco dance floor, although their lyrics also contain deep messages of freedom, tolerance and harmony.

At Pavillion – Move On

Purple is the Color

The jazz band Purple is the Color is known for their elegant sound. Rather than dwelling on standards, they actively incorporate new styles to push boundaries and create a new realm where they create truly transcendental music. The rhythms woven by their piano, saxophone, bass and drums evoke deep emotions and move their listeners.

Purple is the Color – LONDON When you hear one a Tribidabo song, you’ll immediately notice that genre boundaries and musical limitations are nonexistent for this young trio from Steiermark. The interwoven melodies of their saxophone, cajon, accordion and guitar freely express myriad styles. In their music, klezmer meets classical, Romani music meets tango, the powerful sound of the Balkans meets French waltzes, and more.

Pneuma’s four members are involved in a number of projects, with a modern, improvisational focus. They have roots in baroque, free jazz, noise and a cappella music. These diverse genres all meld together in their intricately composed pieces. This accomplished ensemble has performed in many of Vienna’s most prestigious music halls, including the Musikverein, Konzerthaus, Schuberthaus and Burgtheater. A number of music festivals have invited them to perform in recent years, including the Prague Clarinet Days in the Czech Republic, the Styria Chamber Music Festival in Austria and the Aegina International Music Festival in Greece. They also won the prestigious Artis-Quartet Prize in August 2018.

Skiers in the Austrian Alps, the birthplace of alpine skiing   ©Österreich Werbung, Photo by Peter Burgstaller What did you think of your music journey to Austria? There are still many more places to go! Please look forward to our next destination.

(Produced in collaboration with the Austrian Cultural Forum Tokyo, based at the Austrian Embassy Tokyo, and the Austrian National Tourist Office, which provided photos.)