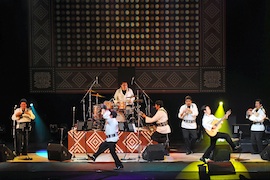 The Min-On Fureai concert series is particularly designed for developing a rapport among neighboring residents by holding concerts of international artists at medium-size theaters in local communities. During October and November, Min-On brought Anata Bolivia, a popular Bolivian folk band from the city of La Paz, onstage for a Fureai concert tour of 28 performances in the Tokyo metropolitan area.

In Bolivia, Anata means “Festivity” or “Carnival,” and Anata Bolivia was formed by a group of professional Bolivian musicians at the initiative of Japanese singer Hiroyuki Akimoto to celebrate the indigenous culture of Bolivian folk music. After graduating from university in Japan, Mr. Akimoto moved to Bolivia to study indigenous music culture and become a professional Bolivian folk musician. After ten years of playing and studying in La Paz, he is now acclaimed as an esteemed singer after the Bolivian heart, and his compositions, which have distilled the essence of Bolivian folk, have won not only popularity but also a number of music awards in Bolivia.

In this Min-On Fureai concert series, the vibrant performances of Bolivian folk music celebrated Anata in local communities throughout Tokyo.