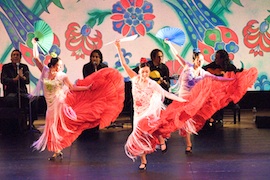 Dancers and musicians of the Ballet de Yoko Komatsubara

During September and October, the premier Spanish dance company in Japan, The Ballet de Yoko Komatsubara, accompanied by a total of six dancers, singers and guitarists invited from Spain, completed a successful sixteen-city tour of the Passion del Flamenco.

Known as Asia’s bailaora, Komatsubara is one of the first-generation of flamenco dancers and a renowned pioneering choreographer in Japan. After she learned the quintessence of Spanish dance from virtuoso dancers in Spain, she formed her own dance company in 1969. Since its founding, the company has performed throughout Japan and abroad for more than four decades, and has received numerous awards, including the Ribbon of the Order of Isabel given by Spanish King Juan Carlos I in 1977 to recognize her contribution to Spanish dance around the world.

Yoko Komatsubara and her company once again have brought the passion and spirit of Spanish flamenco onstage through their singing, dancing, guitar playing as well as hand clapping and foot stamping, which drew enthusiastic applause at every venue across south-central Japan.