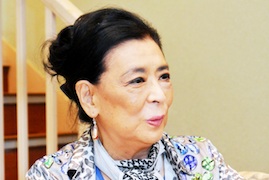 “Flamenco is a physical expression of living as a human being.”

Yoko Komatsubara: Although the exact origin of flamenco cannot be pinpointed, nor its evolution exactly traced, it is believed that some of its roots stem from the musical cultures of the Gitano and Roma, nomadic groups who migrated from northern India about 600 years ago, and who are often referred to as gypsies. Their emotions from the struggles and sorrows of nomadic lives became their songs, and the essence of Indian culture mixed beautifully with the unique musical culture of Andalusia in Spain, and eventually the present form of flamenco evolved. Flamenco embraces the joys and hardships of life, and it is a physical expression of living as a human being. Because flamenco reflects the passion, romance and fervor of people’s lives, it inspires people and is recognized as one of the world’s cultural treasures.

Min-On: As a person growing up in Japan, how did you break into the world of Spanish flamenco?

Komatsubara: When I was a child, I learned the Shamisen and Japanese traditional dance, as well as classical ballet, and later became a stage actress. Although I had a quite few opportunities to see Spanish dance at nightclubs, I didn’t find it very impressive. However, in 1960, I saw a performance by flamenco legend Pilar Lopez at Sankei Hall in Tokyo. The beauty and passion of her performance deeply inspired me, and completely captured my heart. The energy of her performance was incredible, and I fell in love with flamenco. I immediately made plans to go to Spain in 1962. That was the beginning of my long career in flamenco. There in Andalusia, I encountered Maestro Enrique el Cojo. As a child, he had a tumor in his left leg, leaving him with a permanent limp, yet he never gave up dancing. Moreover, he manifested in his performance the courageous spirit of living with this hardship. His performances always inspired me, and brought tears to my eyes. I deeply appreciate learning the essence of flamenco from such a distinguished mentor.

Min-On: Your ballet company has a history of more than 40 years, which is equivalent to the history of flamenco in Japan. At the same time, your company has always had a close association with Min-On. Please share your experience and comments on the activities of Min-On.

Komatsubara: Indeed, the first professional performance of our dance company was sponsored by Min-On, and even before that, Min-On had invited Spanish dance companies to perform flamenco in Japan. In the 42-year history of our company, we have toured throughout Japan and in other countries under the auspices of Min-On, and through those exciting opportunities, numerous dancers and artists from our company have been nurtured, and the company itself has grown. At the same time, I have always felt the sincerity and enthusiasm of Min-On audiences, which is something different to the experience with other concert organizations. Once again, I would like to reiterate my appreciation to the Min-On Concert Association for the last four decades.