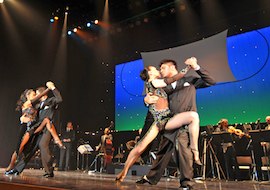 The Min-On Concert Association has long conducted cultural exchange activities with Argentina. Launched in 1970 with a concert by the internationally renowned Orquesta José Basso, the series has continued on an annual basis with a number of successful nationwide tours by, among other fine tango artists, maestros Osvaldo Pugliese and Mariano Mores. To date, the Min-On Tango Series has hosted more than 2,300 tango performances, bringing the wonder of tango to a combined audience of more than 3.5 million people in Japan, undoubtedly contributing to the popularity of Argentine tango in the country.

This year, the 42nd installment of the acclaimed Min-On Tango Series featured the Orquesta Color Tango. This internationally renowned orchestra, conducted by the virtuoso bandoneónist Roberto Alvarez, performed Dramatic Tango—Golden Rhythm onstage in 31 cities throughout Japan from January 26 through March 14.

Widely recognized as successor to the legendary Orquesta Osvaldo Pugliese, the Orquesta Color Tango performed music in Pugliese’s unique style, filled with vibrancy and passion. The orchestra was accompanied by three world-class dance couples, including the Japan’s Chizuko Kuwamoto and Diego Ortega from Argentina, winners of the stage tango category at the finals of the 8th Buenos Aires Tango Dance World Championship in 2010.

The audiences that filled each venue of the tour expressed their appreciation with enthusiastic applause for the assured musical performances from the orchestra and for the breathtaking display of dramatic tango dance by the couples on stage.

Even though a few concerts were canceled due to the March 11 tragedy, the group concluded its hugely successful thirty-four-concert nationwide tour and safely departed Japan.