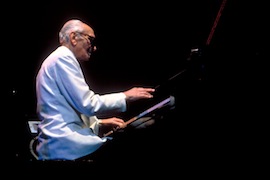 The following are excerpts from the essay titled “Recollections of World Figures: Osvaldo Pugliese —The Venerable Maestro of Argentine Tango” written by Min-On founder Dr. Daisaku Ikeda, president of the Soka Gakkai International, in 1995. Maestro Pugliese is a legendary Argentine tango musician, who developed dramatic arrangements that retained strong elements of the walking beat of salon tango but also heralded the development of concert-style tango music. He passed away on July 25, 1995 after this essay was written.

“My fingers are as hard as nails. I’m just a carpenter, hammering away at the piano keys”— this is the spirit of the maestro of Argentine tango. I like people who are completely devoted to their chosen vocation. Osvaldo Pugliese is tango incarnate. In December of this year [1995], he will be ninety years old. His life has been inseparably intertwined with tango’s century-old history.

To my question, “What is tango?” Mr. Pugliese replies: “It is the folk music of the Argentine people, born from their hearts. It was first heard in the lower class districts near Buenos Aires, and for a time it was regarded as indecent and disreputable. But the people took tango into their hearts, creating deep roots in their lives. Today, it is our national music, and it is loved equally by audiences in Argentina and abroad.”

For a period after World War II, tango enjoyed a boom in Japan as well, and in Tokyo alone there were dozens of “tango coffee shops”—even in Kanda, the area where the old Soka Gakkai Headquarters was located. The annual Tango Concert Series, which began in 1970 under the sponsorship of the Min-On Concert Association, has been popular in Japan for nearly a quarter of a century. Mr. Pugliese has played a major role in elevating tango to an international art form.

“We cannot do the same thing we were doing ten years ago. We must always be thinking about tomorrow. We must always find something new,” asserts Mr. Pugliese, who even included a new composition in his final concert tour before retiring from the stage [held in Japan and sponsored by the Min-On Concert Association in 1989]. Mr. Pugliese’s musical career spanned seven decades, and his music has won the hearts of four generations of audiences—no small accomplishment in itself. The reason for this long-lived success is his iron determination to stay in tune with the people’s feelings, and his faith in the infinite creative richness of the people. “My greatest teacher has always been the people,” he declares.

When I visited Buenos Aires in 1993, not only did Mr. Pugliese come with his wife, Lidia, to greet me at the airport, but he agreed to perform at the Eleventh SGI World Youth Peace Culture Festival [held in the Argentine capital on February 18, 1993]. This itself was a major news event in Argentina, but people were astonished when he brought his entire orchestra to rehearse two days before the festival.

“I don’t like to sit at home. I want to be out among people, creating something together with them,” he once said. His action was in perfect accord with this credo. When his piano was delivered, the then eighty-seven-year-old Mr. Pugliese revealed his amazing youthfulness by trying to push it into place himself!

On the day of the festival, he played the piece he had written for me as a token of his friendship with Japan, “Tokio Luminoso” (Shining Tokyo). As we all applauded his vigorous performance, I recalled what he said to me in Tokyo: “I want to work with you, President Ikeda, for peace, so that we do not repeat the tragedies of the past. I will fight. To the very end, to the moment of my death, I will fight for victory.”

There on the stage, Mr. Pugliese was a living example of his message for all young people: “Study, inquire, seek intensely. Learn what life is, what life should be—this is what you must pursue.”

Adapted from an article in the February 12, 1995, issue of the Seikyo Shinbun