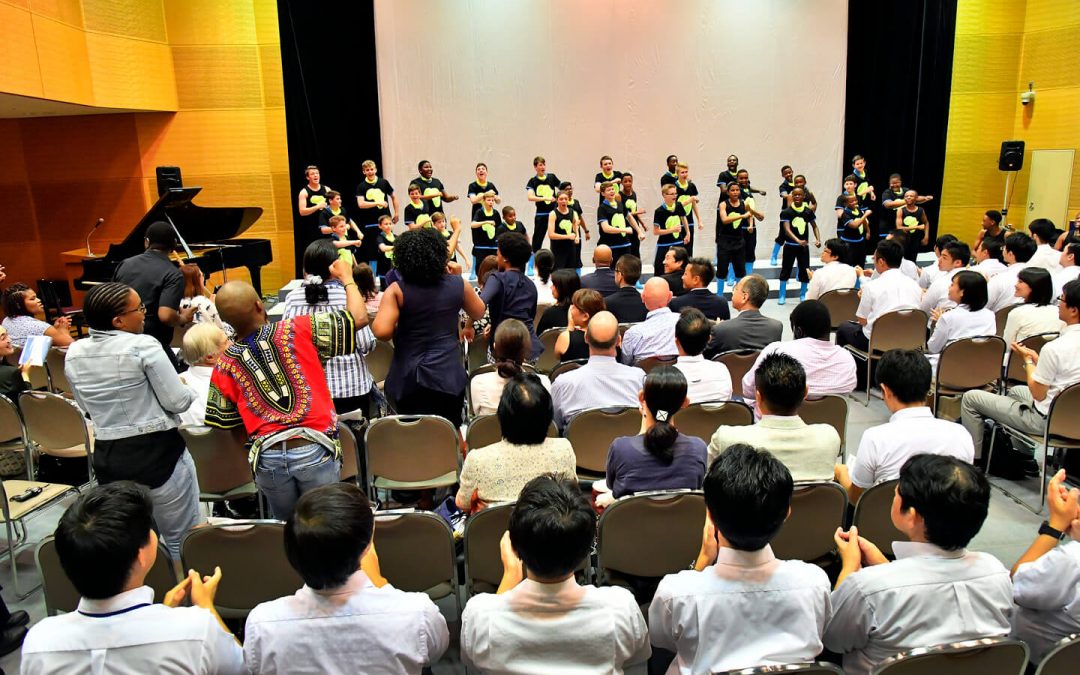 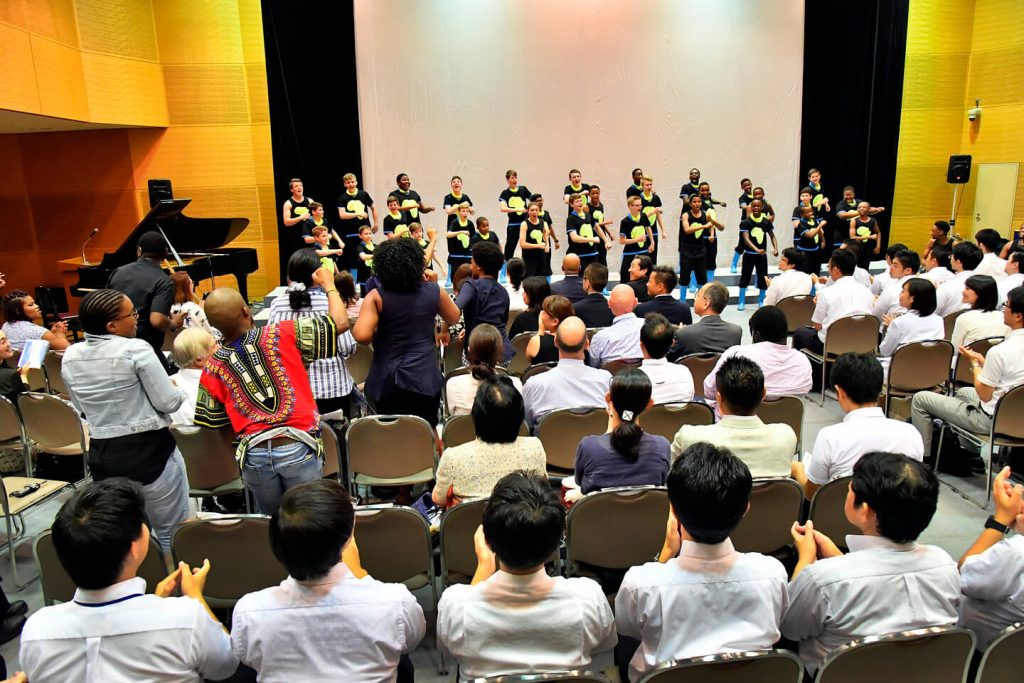 On August 8, at the Museum Hall in the Min-On Culture Center in Shinanomachi, Tokyo, the Min-On Music Museum sponsored a cultural lecture and memorial concert in tribute to the late South African President Nelson Mandela. The event was hosted in cooperation with the embassy of the Republic of South Africa in Tokyo during the Drakensberg Boys Choir’s Japan tour. Looking toward next year’s 100th birthday of Nelson Mandela, Mr. Royce Bongizizwe Kuzwayo, representing South Africa, and Mr. Kazuto Ito, representing the Min-On Concert Association, delivered commemorative speeches. The Drakensberg Boys Choir then gave a performance envisioning Mr. Mandela’s dream of a ‘rainbow nation.’ With the aim of celebrating and learning about his courageous life, and most importantly passing on his legacy to future generations, the memorial event in tribute to the freedom fighter gave both spiritual inspiration and artistic gratification to the young audience in attendance.

(partial introduction of his speech) 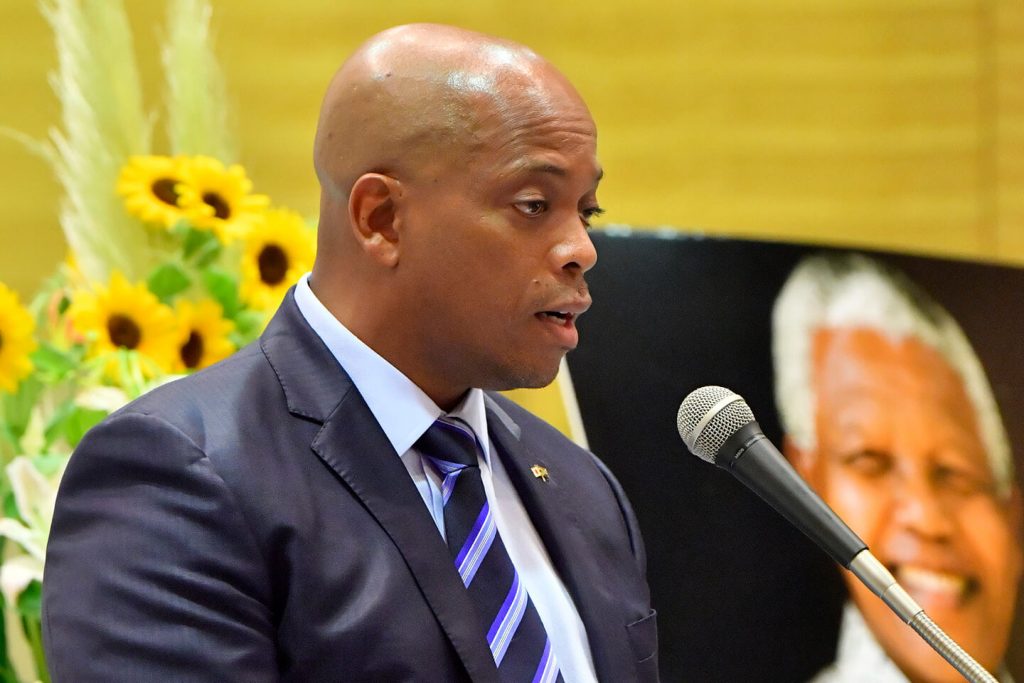 Excellencies, all the staff of the Min-On Concert Association, ladies and gentlemen, and the members of Drakensberg Boys Choir! May I express on behalf of myself, the Embassy and the people of South Africa our sincerest gratitude for availing yourselves and hosting this important commemorative day of our Founding Father Nelson Rolihlahla Mandela.

Today, we would like to remember the sacrifices he made for us to attain our freedom. Nelson Mandela, born on 18 July 1918, in a small town called Mvezo, in the Eastern Cape Province of South Africa would have seen him celebrate this year his 99th year of his life but as we all know, he was sadly lost to the world on December 5, 2013.

Born during World War I, far from the corridors of power, as a young boy he herded cattle and was tutored by elders of his abaThembu tribe, Nelson Mandela would emerge as the last great liberator of the 20th century. Like Mahatma Gandhi, he would lead a resistance movement, a movement that at its start had little prospect for success. Like Dr. Martin Luther King, Jr., he gave a potent voice to the claims of the oppressed and the moral necessity of racial justice. He endured a brutal imprisonment that began in the time of Kennedy and Khrushchev, and reached the final days of the Cold War.

When he emerged from prison, without the force of arms, he held his country together when it threatened to break apart. He worked to erect a constitutional order, to preserve freedom for future generations, a commitment to democracy and the rule of law ratified not only by his election, but by his willingness to step down from power at the end of his first and only term as President of the Republic of South Africa.

It was precisely because he could admit to imperfection, because he could be so full of good humor, even mischief, despite the heavy burdens he carried, that we loved him so much. He was not a bust made of marble; he was a man of a flesh and blood, a son and a husband, a father and a friend. It is for this reason that we learned so much from him, and that’s why we can learn from him even today.

His inspirations in our hearts humble us and make us commit to the value of life, to respect all languages and cultures and to oppose racism, sexism, chauvinism and genocide. He has never wavered in his devotion to democracy, equality and learning. Despite terrible provocation, he has never answered racism with racism. His life has been an inspiration in South Africa and throughout the world to all who are oppressed and deprived and to all who are opposed to oppression and deprivation.

We trust that young Japanese friends and our South African youth of Drakensberg Boys Choir present here today will remember Nelson Mandela as a symbol and a tool to use as a common platform to serve humanity and to deepen and entrench the spiritual philosophy of Ubuntu (means “the belief in a universal bond of sharing that connects all humanity”) and its inherent values of equality, freedom and justice for all.

In closing, may I once again thank all of you present here today, my colleagues from the Embassy, Min-On and our exceptionally melodious Drakensberg Boys Choir. Thank you so much.

(partial introduction of his speech) 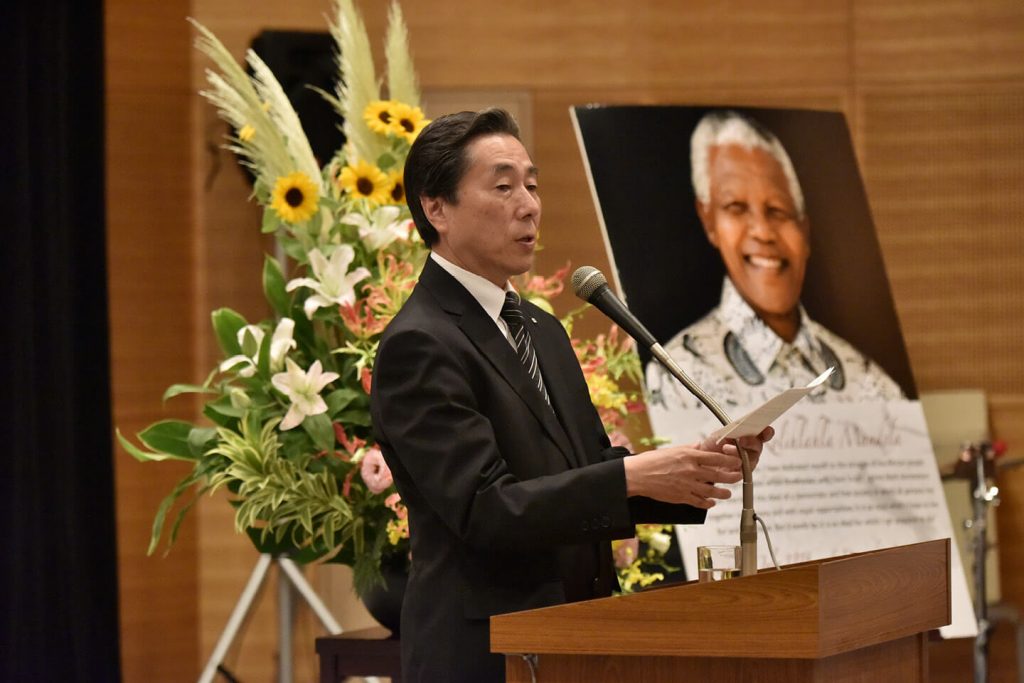 Today, please allow me to share my personal experience of meeting Mr. Mandela. I had the great honor of meeting him on the occasion of his first encounter with Min-On Founder Daisaku Ikeda here in Shinanomachi, Tokyo in October 1990. It was a little more than half a year after his release from nearly twenty-eight years of imprisonment. Mr. Mandela was not the president of South Africa yet, but he visited Japan in his capacity as deputy-president of the African National Congress (ANC) party. During his stay in Tokyo, their first meeting was realized at the request of Mr. Mandela. I still remember it vividly. As he arrived at the meeting venue in Shinanomachi, Mr. Mandela was greeted by our founder, together with hundreds of students and young representatives, who sang, “Rolihlahla Mandela—Freedom is in Your Hand,” the song repeated by the people of South Africa in support of their imprisoned freedom fighter. Mr. Mandela quietly stood and listened to the song with a big smile on his face until their performance ended. At that moment, he did not say anything, but later, he laid his heart bare and remarked how greatly touched he was by the youth’s heartfelt song, and how he would never forget the warm welcome of their sincere hearts and pure sparkling eyes.

Mr. Mandela described his time in captivity as “every hour seemed like a year.” Indeed, the severe environment of 28 years of imprisonment adversely affected his health to a serious extent. Even during the meeting with Mr. Ikeda, his exhaustion was quite apparent. Regardless, he sat up straight in his seat and intently listened to the reading of a poem, entitled “Banner of Freedom, Path of Justice,” written by our founder in tribute to Mr. Mandela—the champion of freedom. As their heart-to-heart talks continued, Mr. Ikeda proposed organizing a series of cultural and educational exchange programs aimed at the Japanese public, focused on the reality of apartheid and promoting educational initiatives in South Africa. As Mr. Mandela accepted the proposals with genuine joy, his secretary Ismail Meer stood up from his seat and expressed sincere gratitude to the offer of cultural exchange as a welcome recognition of Africans as human beings. This is what had been denied to them in South Africa, where they were simply classified as “black.” As the meeting was coming to a close, Mr. Mandela said, “A great harvest we have reaped here today is your words of wisdom. Medals may someday be destroyed. Awards may be burned or lost or stolen. However, words of wisdom are imperishable. In this sense, today, we have received more than mere awards as we listened to you. We will leave here as better individuals than when we arrived.” Then, as they firmly shook hands, he said, “because of today’s meeting, I feel healthier than before.

As everyone knows, Mr. Mandela struggled his entire life to realize his dream of a land ruled neither by blacks nor whites, but rather, of a “rainbow nation” in which all people enjoy equal treatment. His call from inside prison raised the spirits of a number of freedom fighters for peace outside those walls. Drakensberg Boys Choir School (DBCS) was not an exception. Initiated by the courageous singing voice of one individual, the entire school eventually stood against apartheid and opened their doors to people of all colors. When I visited South Africa in 1993 as a member of the Min-On Concert Association, with the mission of bringing our founder’s proposal of cultural exchange with South Africa to fruition, DNCS was already one of the most appreciated and respected non-discriminatory institutions representing the rainbow nation of South Africa. The singing voices of individuals in harmony have the power to influence humans to unite in harmony as equals. We hope the Drakensberg Boys Choir, inheriting the spirit of the late President Mandela, continue to inspire humanity in hearts around the world through the power of their harmonious music.