The Norwegian Girls’ Choir Premiere in Sendai for Japan Tour 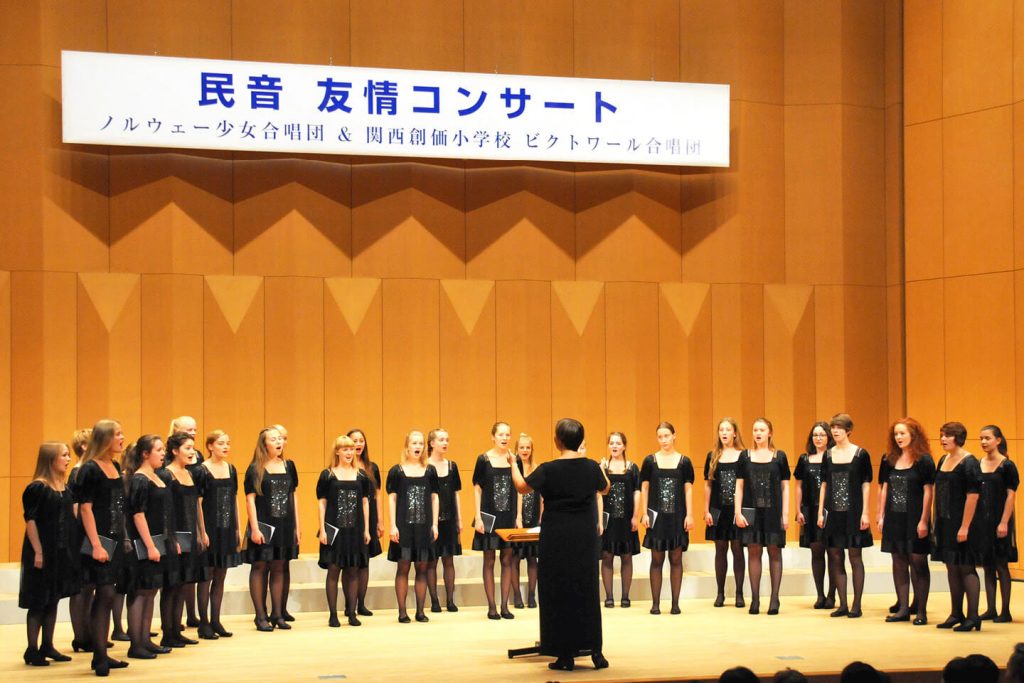 The Kingdom of Norway is known for its magnificent natural scenery, from majestic fjords to spectacular auroras. Norway has also given the world a number of influential musical artists. One such artist is internationally acclaimed composer Edvard Grieg, who contributed to the creation of a musical culture unique to Norway. Grieg left many beautiful Norwegian folk songs and choral pieces as part of his legacy.

The Norwegian Girls’ Choir is one of the most prominent modern choirs from the country. Since its establishment in 1947, the Choir has maintained a longstanding tradition of sharing the joy of choral music at the highest artistic level. It has participated in many overseas music festivals and won several prizes and awards domestically and internationally.

Min-On was proud to welcome to Japan these young cultural emissaries of Norway, with the cordial support of the Royal Norwegian Embassy in Tokyo. Their eleven-city nationwide tour premiered in the city of Sendai in the Tohoku region on July 14. The tour successfully concluded in the historical city of Kamakura on August 7, having won the highest praise from enthusiastic audiences at every venue.

Min-On asked Ms. Anne Karin Sundal-Ask, artistic director of the Choir, to share her thoughts and impressions on its unprecedented concert tour in Japan.

About This Concert Tour: This is really a big concert tour for us. There aren’t many choirs in our country that have done a tour like this. We were under a certain degree of pressure singing in such large venues throughout Japan, and I’m overjoyed that all of the concerts were a great success. I’m very glad that all of the girls could come on this tour, despite various difficulties. Everyone had a valuable experience and learned so much during our very meaningful and fantastic month. We deeply appreciate the exhaustive care and support provided by Min-On throughout this tour.

About the Japanese Audience: There’s a big difference between a concert in Norway and a concert in Japan. So many audiences here listened to our songs with tears in their eyes and offered tremendous cheers and applause. They even wrote us cards and shared with us their heartfelt comments, such as how they felt about our performance. In Norway, it isn’t often that you see the audience crying during a concert, but here, it’s happened at every concert we have given. In Norway, people don’t say much and keep their emotions inside, even though they do have deep feelings. But I’d like to thank every audience here in Japan for showing all their emotions, because that means so much to us.

About the First Concert in Sendai: It was an important start for us, because we heard about what happened and how people have struggled in the region since the 2011 earthquake. A song that really touched our hearts and those of the audience was “Hana wa Saku” (“Flowers Will Bloom”), which, we heard, was written in support of disaster recovery efforts. We also had, in Norway, a very sad incident some years ago, in which many youths died. Of course, many more people died in the earthquake in Japan, but sorrow in all nations is the same. The girls and I understand that the process of healing takes a long time. All our singers really understand the meaning of the lyrics to “Hana wa Saku” and have very strong feelings when they perform that song.

About Norwegian Folk Songs: In our folk music in Norway, songs are written for different occasions with different feelings. For example, wedding marches are uplifting, and then we have lullabies, which are very soft and sweet. We also have some very cheerful dance music, but all in all, Norwegian folk music has a kind of down-to-earth quality. In Norway, people feel deeply, but they don’t say too much, so some songs don’t even have lyrics—just lots of feeling behind the melody. We sing those songs without words and convey the emotions with our voice.

About Cultural Exchange and Power of Music: At all the exchange concerts we had here, we sang with each other and got to know each other quite a bit. And we came to have a sense of respect for each other. And that’s good for peace, I believe. Even though there are language barriers, if you do something together, that’s just as meaningful. Especially to sing together, without lyrics—that’s really a nice way to feel close to each other, and that’s the power of music, I feel. Thank you to all audiences in Japan who shared the experience with us.