Interview with H.E. Akylbek Kamaldinov, Ambassador of the Republic of Kazakhstan 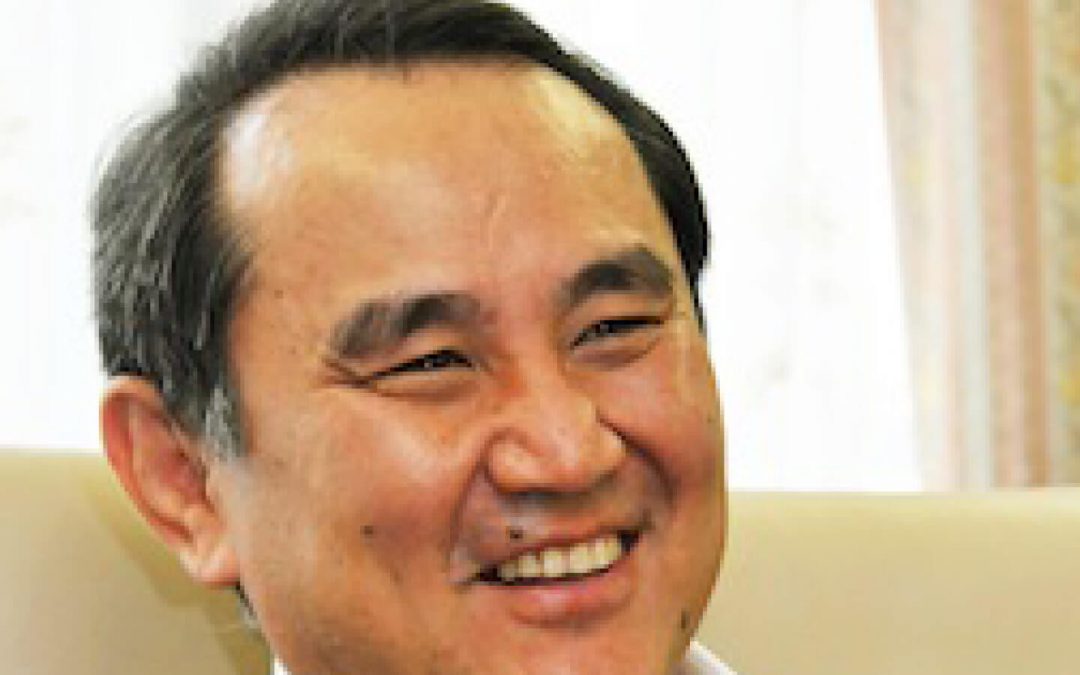 The Unique Musical Heritage of Kazakhstan 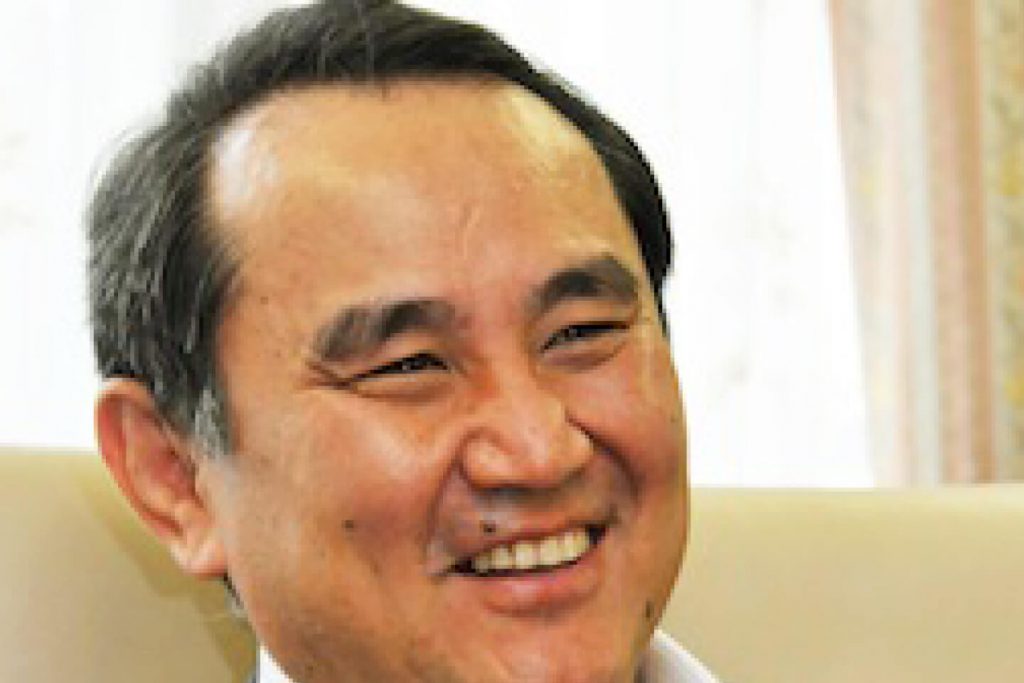 During their long history, the Kazakh people created a priceless seam of musical culture.

Min-On: We deeply appreciate your Excellency’s consistent support of Min-On’s cultural activities. Indeed, Japan and your esteemed country of Kazakhstan have forged close cultural ties and developed a wonderful relationship since the establishment of the Republic of Kazakhstan in 1991.

Ambassador Kamaldinov: The history of cultural cooperation between Kazakhstan and Japan really began in 1994 with a great focus on humanitarian concerns. An important area of bilateral cooperation between our two nations was the overcoming of the negative consequences of the use of nuclear weapons. Kazakhstan is grateful for the fact that the Government of Japan was among the coauthors of a UN General Assembly resolution on the Semipalatinsk (later renamed Semey) region which designated August 29 as ‘International Day against Nuclear Tests’. The date commemorates the day in 1991 when President Nursultan Nazarbayev signed a decree closing the Semipalatinsk Nuclear Test Site.

We were pleasantly surprised that Zaman- ai (‘Oh Such Times’), a song by the famous Kazakh singer Roza Rymbayeva and a symbol of the popular movement against nuclear tests at the former Semipalatinsk Nuclear Test Site, was reborn in Japan as the anthem of the popular anti-nuclear movement.

We are also grateful to the Government of Japan for cultural grants in the form of technical assistance to renowned educational and cultural institutions in Kazakhstan, including the Kazakh National University, the State Academic Opera and Ballet House, and the Kazakh National Conservatory.

As the Embassy, we frequently invite musical groups and artists from Kazakhstan to perform in Japan, as well as organize numerous exhibitions around the country that show the natural and cultural diversity of Kazakhstan and its people.

Min-On: Based on its long history and rich traditions, Kazakhstan has such a uniquely articulated culture, especially in art and music. Please share with us your thoughts on the importance of treasuring a country’s cultural heritage.

Ambassador: As was noted by Leader of the Nation, President Nazarbayev, “Culture is a reflection of the nation, its soul, mind and nobility. Civilized nations are proud of the course of its history, development of the culture, great people, who glorified the country and who made an enormous contribution to the golden fund of world achievements of thought and art. It is through culture and traditions nations become famous.” The Kazakh people have a centuries-old history and possess cultural artifacts that are part of the treasury of world civilization. The number and diversity of monuments in Kazakhstan puts it in line with such countries as India, China, the Mediterranean countries and the Middle East; it’s like a unique open-air museum.

Our cultural heritage includes the diversity of cultural artifacts of the peoples who lived on the territory of present-day Kazakhstan— more than 25,000 immovable monuments of history, archeology, architecture and monumental art; more than two million pieces of cultural heritage held by 89 state museums; and 66.8 million volumes of books, rare manuscripts and unique publications stored in 3,500 state libraries. 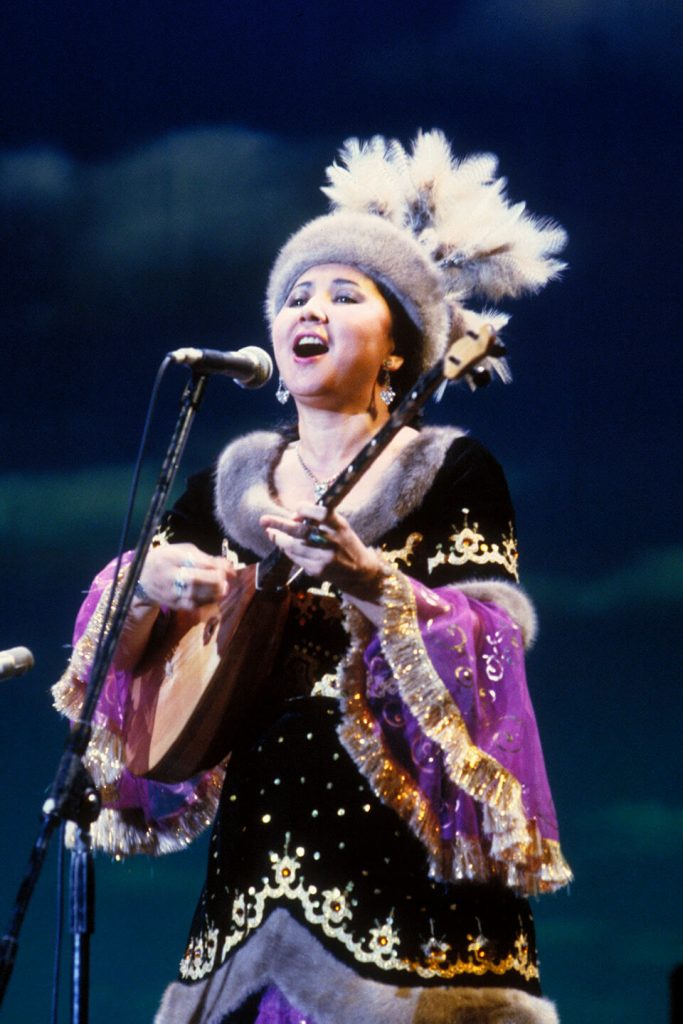 Historically, the “medial” location of Kazakhstan in Eurasia, the largest continental landmass in the world, meant it was directly involved in many significant civilization processes and events. From times immemorial, the broad Kazakh lands acted as the cultural cradle for the whole of Eurasia. In ancient times, the steppes of Kazakhstan formed part of the great Silk Road that connected East and West. The caravan routes were used by many cultures, customs and religions. The heritage of that epoch lives on today in the shape of numerous monuments of history and culture—wonders of ancient, medieval and oriental architectural art and culture.

Many of these monuments have been recognized by UNESCO as the World Heritage Sites. Today the cultural ‘brand’ of Kazakhstan is represented by ‘The Golden Warrior,’ the Mausoleum of Khoja Ahmed Yasawi, the ancient towns of Otrar and Turkestan, and so on.

The musical heritage of Kazakhstan is also unique. It is said that “God included in souls of the Kazakh a part of kui from the moment of their birth.” (Kui is an ancient musical art and part of the centuries- long culture of the Kazakh people). It is no accident that 18th and 19th-century travelers to the country who witnessed the lives of Kazakh people expressed their surprise at the amazing musical and poetic improvisation practiced by people, as well as the involvement in musical art by everyone, from babies to elders. Ancestors of the Kazakh people—nomadic tribes with their own distinctive cultures—developed a rich variety of instrumental music as well as unique musical and poetic traditions that live on to this day. Talented artists created high art and encouraged ordinary people to join the “celestial mystery” of the music. In the Great Steppe, artists were highly respected, alongside famous rulers, outstanding state figures and warlords. During this period of its history, the Kazakh people created a priceless seam of musical culture. One of the most popular and significant epic Kazakh poems, Kyz-Zhibek, has been recognized by UNESCO as an intangible cultural heritage. 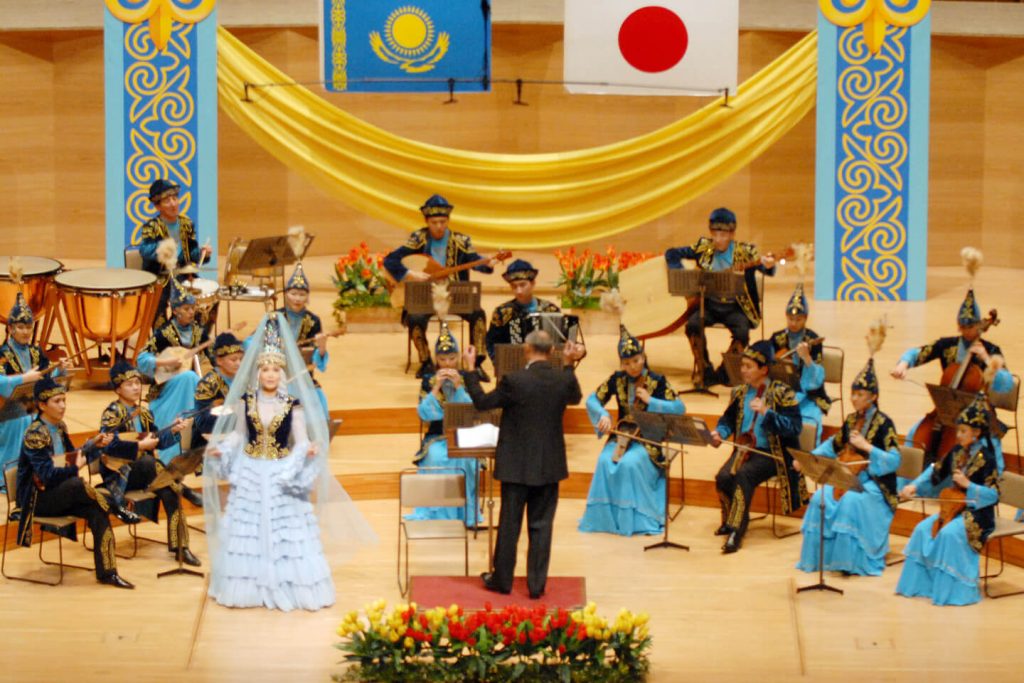 Min-On: Your Excellency has participated in many Min-On events and has kindly collaborated on cultural exchange activities. Please share with us your experience and impression of those cultural activities.

Ambassador: We are honored to have such a reliable and loyal friend as the Min-On Concert Association, an organization that makes a significant contribution to the strengthening of friendly relations between the peoples of Kazakhstan and Japan. In 1991, the Association launched its 7th installment of A Musical Voyage along the Silk Road, which featured the unique music of Kazakh artists and traditional musical instruments. This project was one of the first to introduce the unique culture and musical heritage of Kazakhstan to the Japanese public.

In 2008, the Association played an important role in the success of the first ever ‘Days of Culture of Kazakhstan in Japan’ festival, especially in the organization of the festival’s most striking event, a gala concert held at Suntory Hall that featured the well-known Kazakh ensembles Otyrar Sazy and Camerata of Kazakhstan.

In 2012, thanks to the Association’s support, we successfully concluded a Japan tour of music groups from the Kazakh National Academy of Arts dedicated to the 20th Anniversary of the establishment of diplomatic relations between Kazakhstan and Japan. Despite our long history of collaboration with the Min-On Concert Association, we are confident that our relationship will be closer still in the future, strengthening the bonds of friendship between our nations. We hope that the Association will continue to act as a catalyst for major cultural events with the participation of famous Kazakh groups in Japan, as well as famous Japanese artists in Kazakhstan.