Interview with Mr. An Ning, Tour Director of the Shenyang Acrobatic Troupe of China

Min-On: Thank you very much for staging such wonderful performances every day. Your acrobatics, called zaji in Chinese (zatsugi in Japanese)—literally, “miscellaneous skills”—are a unique and beautiful form of performing art, a form that is popular not only in China but also here in Japan and indeed all over the world.

Director An Ning: Yes, zaji is a form of traditional Chinese performing arts with a long history of more than 3,700 years. Broadly speaking, zaji encompasses various performance skills that originated from skills and activities used in everyday life, as well as physical feats and martial arts. In ancient times, it was called ‘miscellaneous art’ or ‘varied skills and performing arts’. For example, the tableware used for performances of spinning plates and kicking bowls, as well as the chairs that are stacked up for the balancing acts, all come from the dining room at home. In a sense, zaji is an art form that expresses people’s energetic life forces of daily living. Sky Mirage describes the beauty and power of the human body as a form of art.

Min-On: As a cultural envoy of China, the Troupe has promoted goodwill around the world.

Director: One of the first public hints of improved Sino-Japanese relations came in 1971 when the Chinese table tennis team visited Nagoya. Following that event, the Shenyang Acrobatic Troupe was dispatched to Japan for the first time. Also in 1972, seven years prior to the establishment of diplomatic relations between China and US, the Troupe toured America and was received by President Nixon and his wife at the White House. We are all proud of the fact that our performances could contribute to promoting friendly international relations and friendship exchange. 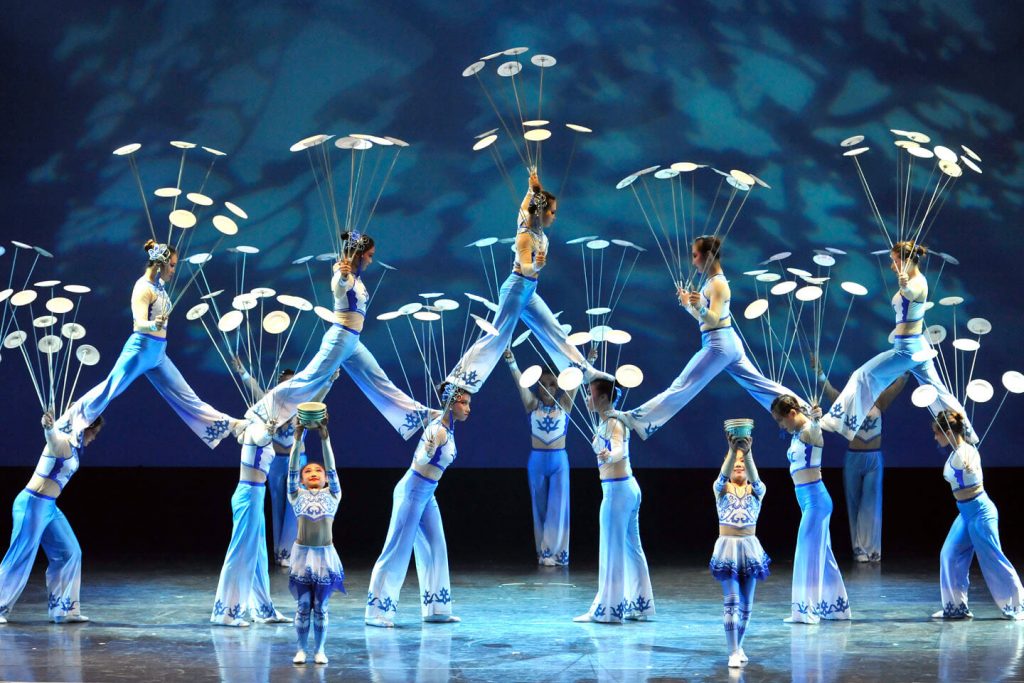 Min-On: It is an amazing contribution, visiting over 70 countries and regions all over the world, with such great success everywhere.

Director: It is only my personal opinion, but after visiting and performing in more than 500 cities around the world, I feel that this Japan tour is one of the most significant accomplishments for us, because we truly share the mission of the Min-On Concert Association—to promote international cultural exchange in order to deepen mutual understanding and friendship among all countries. Min-On founder Dr. Ikeda is a lao peng you (old best friend) to the people of China. We sincerely admire his dedication of promoting long-standing friendships with people not only in China but all over the world, furthering the dream of global peace.

Min-On: Your Japan performances this time also commemorate the 35th anniversary of the conclusion of the Peace and Friendship Treaty between Japan and China.

Director: From the audience at every venue, we have directly experienced the sincere enthusiasm of people for better relations and stronger bonds of friendship. I am determined that our tour continues to deliver our best performances to fulfill our mission of being a bridge of friendship and trust between the people of our two countries.