Min-On Music Journey No. 18: The Kingdom of Thailand 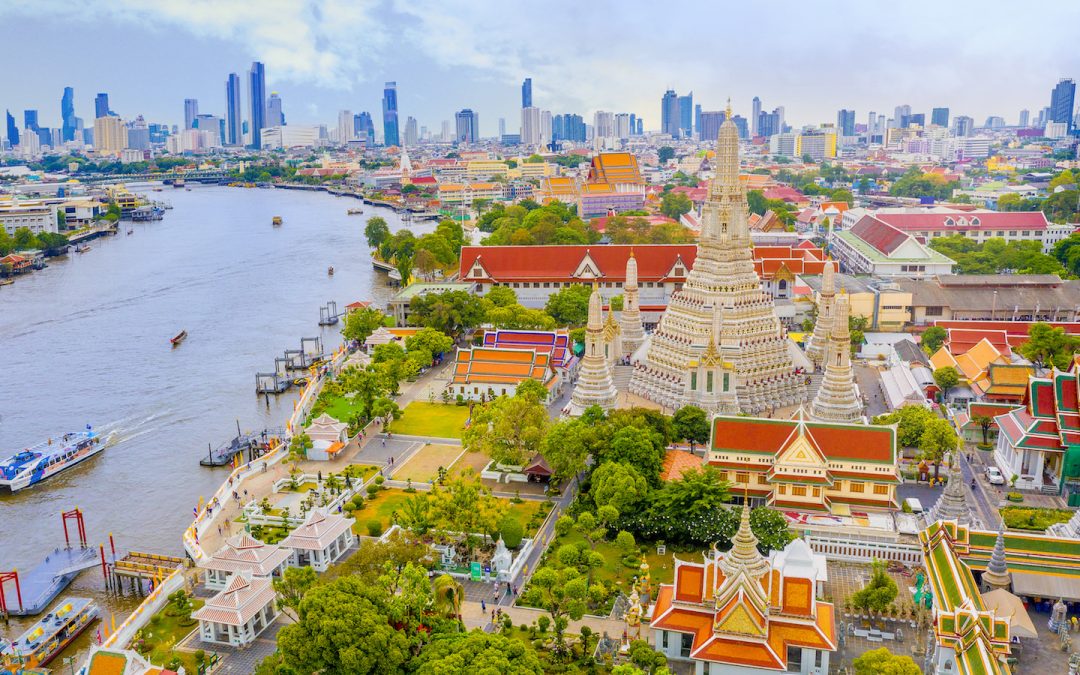 Welcome to the next installment of Min-On’s Music Journey! Today, Min-On Concert Association and the Royal Thai Embassy in Japan welcome you to Thailand in Southeast Asia.

Thailand has many fascinating locations that attract many tourists annually, including beautiful tropical beaches, luxurious palaces, temples and other ancient monuments that offer a window into the country’s history. 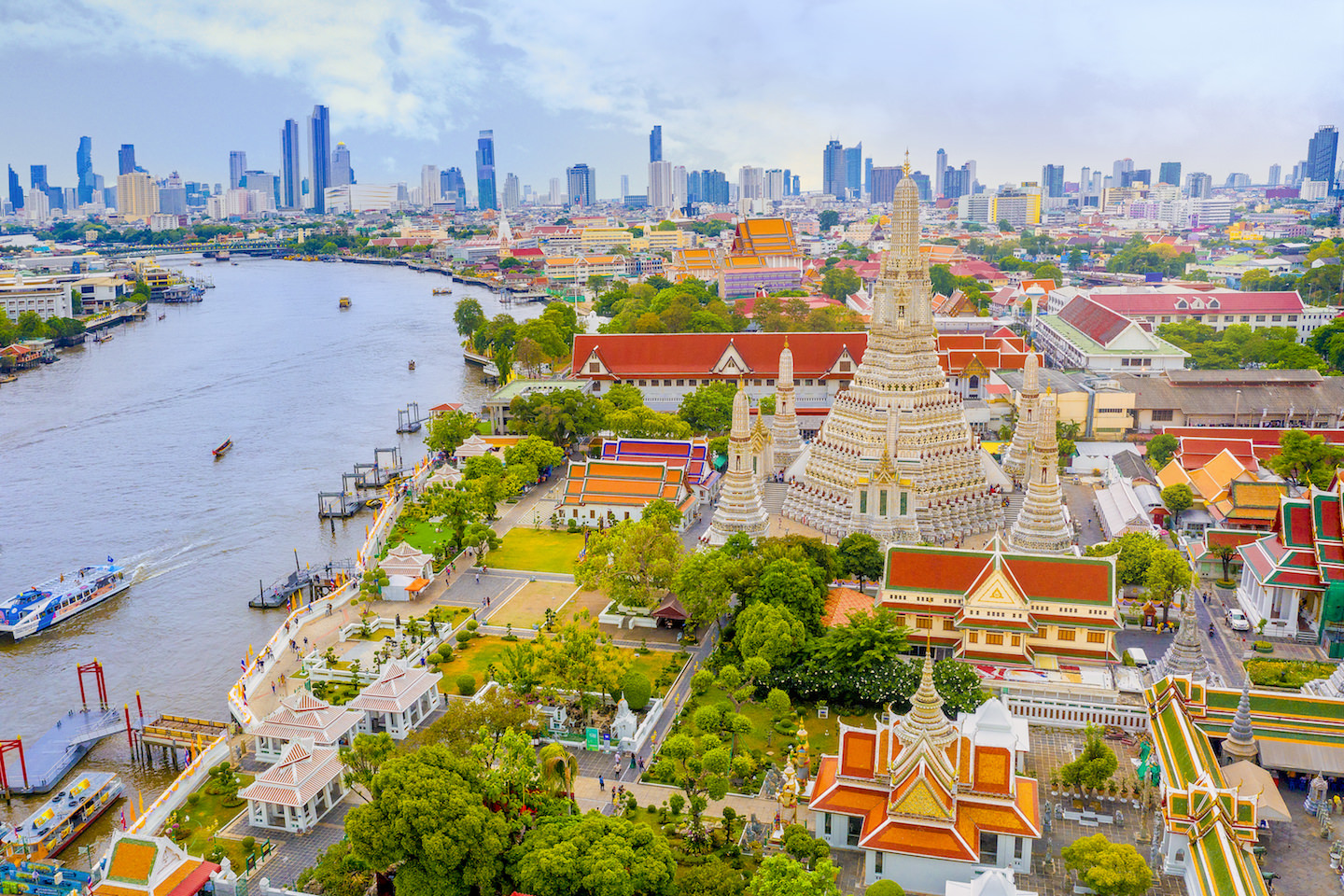 The bustling, shining capital of Bangkok

In Bangkok, the bustling crowds of a flourishing metropolis and austere Buddhist traditions coexist, creating a city where the modern era and ancient history blend together in perfect harmony. Since 1782, Bangkok has continued to develop into the political, economic, educational and cultural center of Thailand, and today it is an advanced, cosmopolitan hub in Southeast Asia. In the historic area of Rattanakosin Island surrounded by the Chao Phraya River and many canals, visitors can enjoy the awe-inspiring Grand Palace and shimmering, golden Buddhist temples. 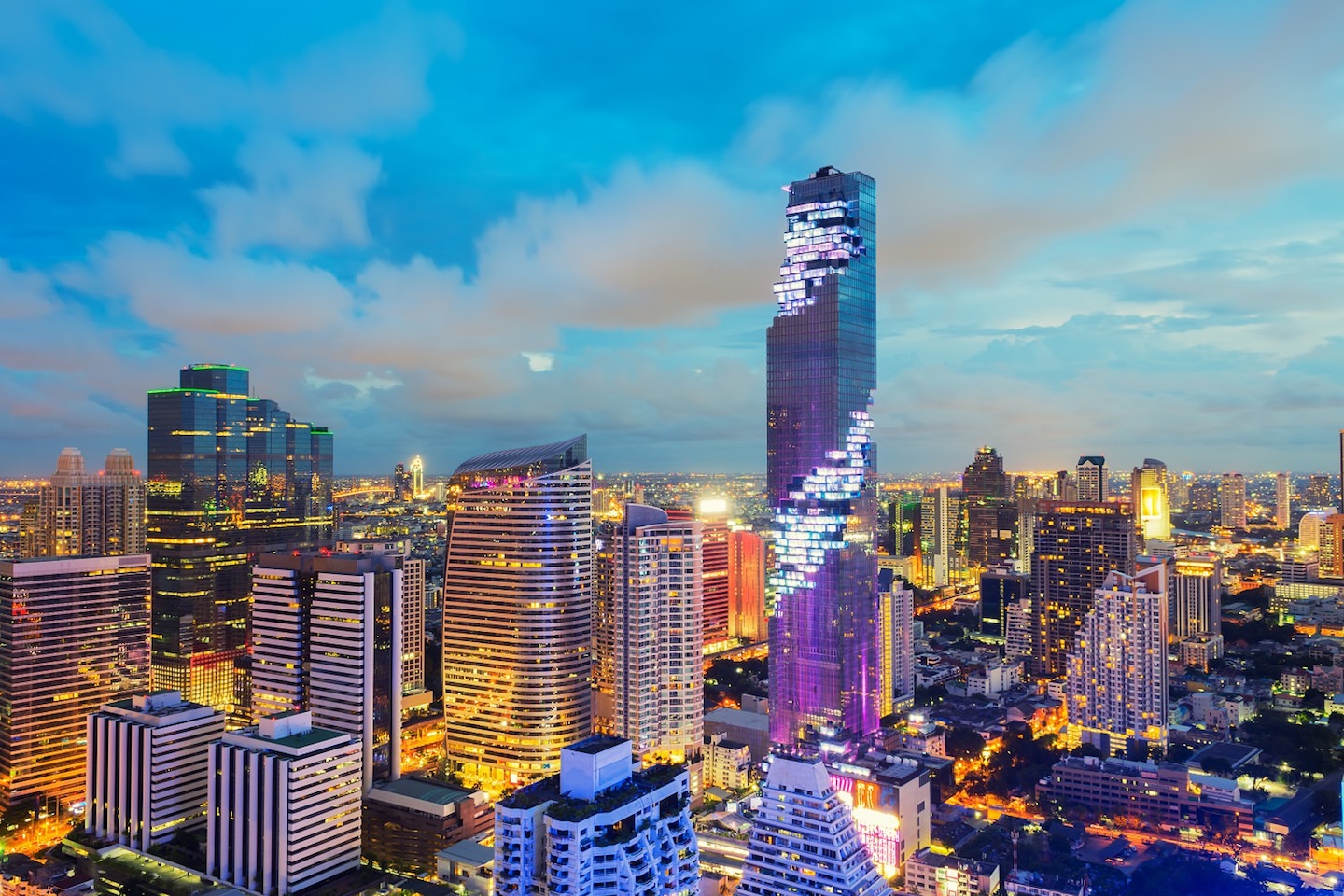 The cosmopolitan city of Bangkok

Chiang Mai is a beautiful ancient city 750 kilometers north of Bangkok praised as the “Rose of the North.” It has played a central role in the region since being founded in 1296 on the banks of the Ping River. Many different ethnic groups have converged here, and their respective architectural styles, Buddhist statues, language, cuisine, research and industries have led to the development of the unique Lanna culture of northern Thailand. Today, the city is known for excellent craftsmanship and is a center for Thai art focused on traditional techniques. 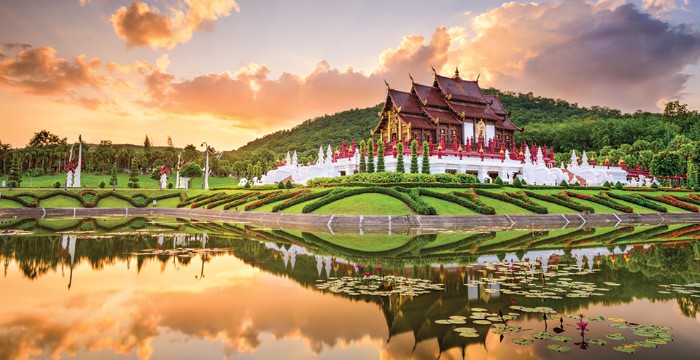 Ayutthaya, a city of ruins steeped in history

Ayutthaya served as the capital of the Ayutthaya Kingdom from the mid-14th century, making it the center of Thailand for over 400 years. Thanks the surrounding Chao Phraya River and its tributaries, it was well suited for seafaring trade and prospered in the early 17th century as a trading hub between Europe and East Asia. The majestic ruins of the city convey the nature of that era to modern-day visitors, including moss-covered chedi (structures made to house sacred Buddhist relics), statues of the Buddha reclining peacefully in nirvana and exquisite royal villas once home to generations of kings. The city is now preserved as a historical park and was registered as a UNESCO World Heritage Site in 1991. 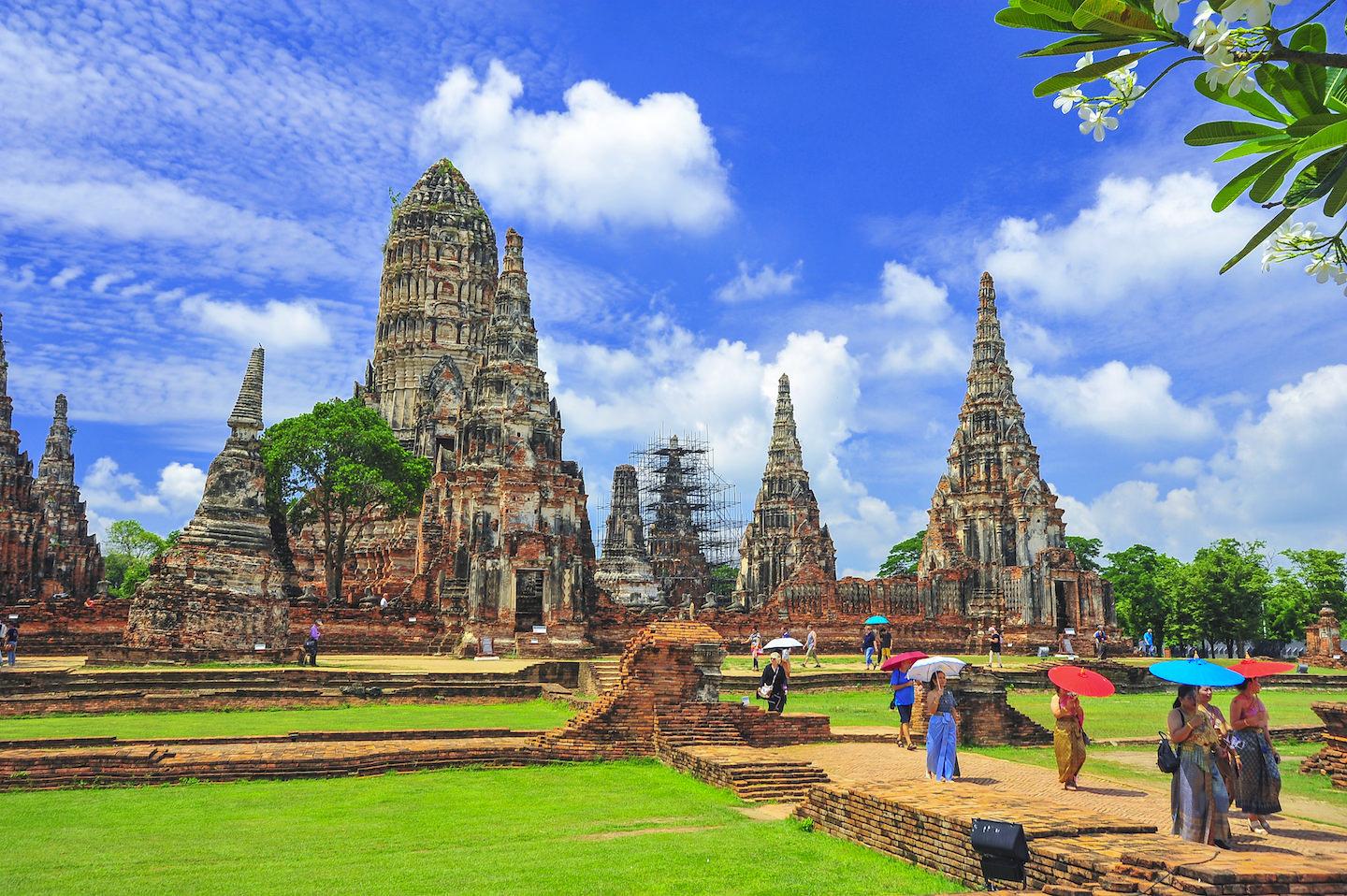 Thailand, a country of beautiful seas and natural treasures

Khao Yai National Park is Thailand’s first national park and was registered as a World Natural Heritage Site in July, 2005. Khao Yai means “big mountain” in Thai and over 85% of its area is covered by forests that contain nearly 100 different species of trees. Visitors can enjoy many kinds of flora and fauna as they hike through the park.

Phuket, Thailand’s largest island, is surrounded by the Andaman Sea in the south and is a globally renowned resort destination. The beauty of its emerald green waters and pristine white beaches have earned it the nickname the “Pearl of the Andaman Sea.” Visitors here can enjoy beach resorts and water sports year-round. 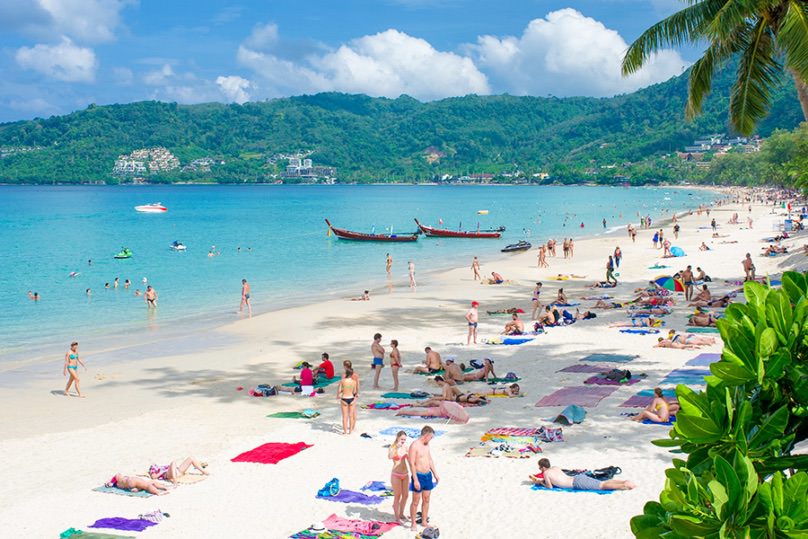 Colorful “floating markets” decorate the rivers, waterways and lakes of Thailand. These traditional Thai markets supply everything you need, from groceries to general goods. The enthusiastic voices of the shop owners resound through the waterways as they pass through on their small boats daily, piled high with goods including fresh fruit, vegetables, meat and seafood. 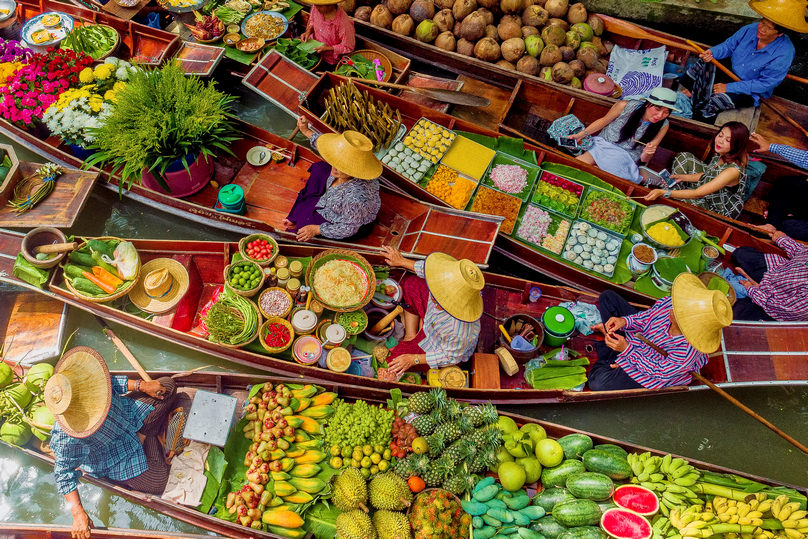 Thailand has many different dance styles that can generally be divided into either traditional, classic dance or folk dance. Many of their themes come from the Ramakhyaen (the Thai translation of the Ramayana, an ancient Indian epic poem originally written in Sanskrit), and have been passed down from the Sukhothai and Ayutthaya kingdoms, where they were originally court dances. Thai dance expresses emotion through fluid arm and delicate finger movements accompanied by orchestras consisting of traditional Thai xylophones, flutes, drums and more. Khon, a style of masked dance drama that features classical modes of expression from Thai theater, was registered by UNESCO as Intangible Cultural Heritage in 2018.

Khon performances involve graceful dance movements, instrumental and vocal renditions and glittering costumes that depict the glory of Rama, the hero and incarnation of the god Vishnu, who brings order and justice to the world.

The Khon performance in the links below includes scenes from the episode of “Sueb Marga: The Adventures of Hanuman,” presented by the SUPPORT Foundation of Her Majesty Queen Sirikit, The Queen Mother. The episode is vibrant, lively and thought-provoking as it follows the adventures of Hanuman, commander of Rama’s simian army. When Rama leads his army across the sea to battle the demon army in the city of Longka, he assigns Hanuman to reconnaissance the route closely guarded by the demon army.

*No English captions and each video is 25 minutes long

To date, Min-On has held performances of the Thailand National Dance Group in 1984 as part of the first installment of the Marine Road Series, “The Amazing Dances of Thailand and Okinawa,” the Royal Thai Dance Troupe, performances of Thai puppet plays, and a special concert of His Majesty King Bhumibol Adulyadej’s compositions.

The Royal Thai Dance Troupe performing the traditional Thai drama, “Manora” in 1987 (left) and a Thai puppet play in 1990 (right)

In 2019, the Min-On Global Music Network dispatched traditional Japanese musicians Shogo Yoshii and others to Thailand to perform in Bangkok and Chiang Mai. Please enjoy this piece from those performances, which is a collaboration of the traditional Thai ranat, played by Mr. Tossaporn Tassana, with traditional Japanese instruments.

You can listen to the piece here: 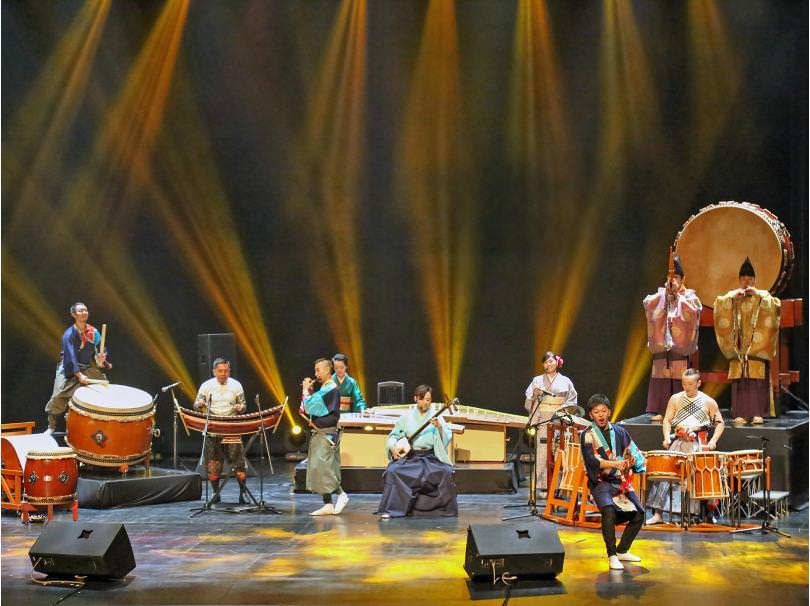 In closing, we would like to introduce performances by the Bunditpatanasilpa Institute as recommended by the Royal Thai Embassy in Japan.

The Bunditpatanasilpa Institute is blessed with a high number of specialists and national artists who teach and pass down their experience and knowledge in the arts. Her Royal Highness Princess Maha Chakri Sirindhorn, a devoted supporter of inherited art and Thai culture, gave the name Bunditpatanasilpa to the institute on 27 March 1997. This name refers to an institute that produces graduates who are experts in the art of prosperity. Furthermore, it also connotes improving education in music and the fine arts, leading to personal, social and national development.

This dance was inspired by a dance from the early era of the Ayutthaya Kingdom. It depicts the enthronement ceremony of a king that is becoming a god, surrounded by male and female angels exalting his reign.

This dance was inspired by the exceptional beauty of a Thai woman from the Ayutthaya Kingdom. The dress worn here is indicative of traveling to see a royal court procession in the evening.

This dance expresses the beauty and vibrance of the people from Thailand’s four regions—north, central, northeast and south.

This dance expresses the features of Bangkok, which was once called Krung Thep, or “City of Angels,” with a modern sensibility. Male and female angels dance, and features of beautiful Bangkok, including tuk-tuks and The Grand Palace, are featured through shadow picture play. 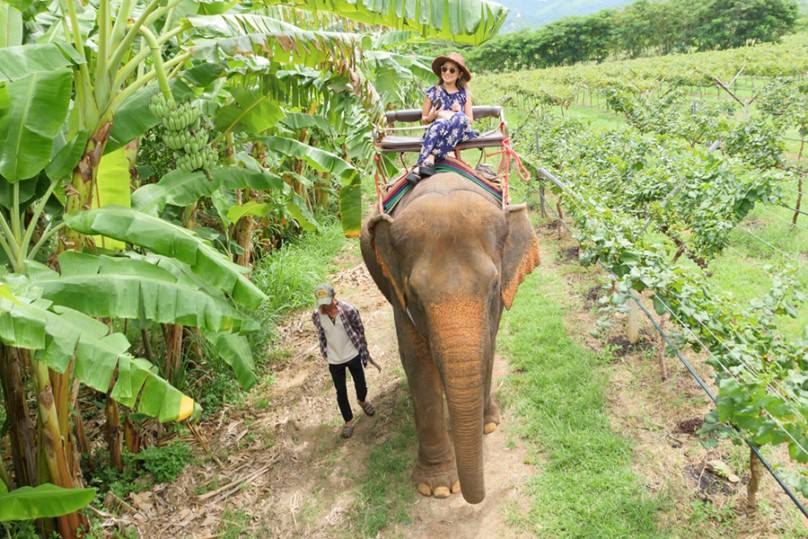 Produced in collaboration with the Royal Thai Embassy in Japan. Photos provided by the Tourism Authority of Thailand.