Min-On Music Journey No. 15: The Republic of Nicaragua 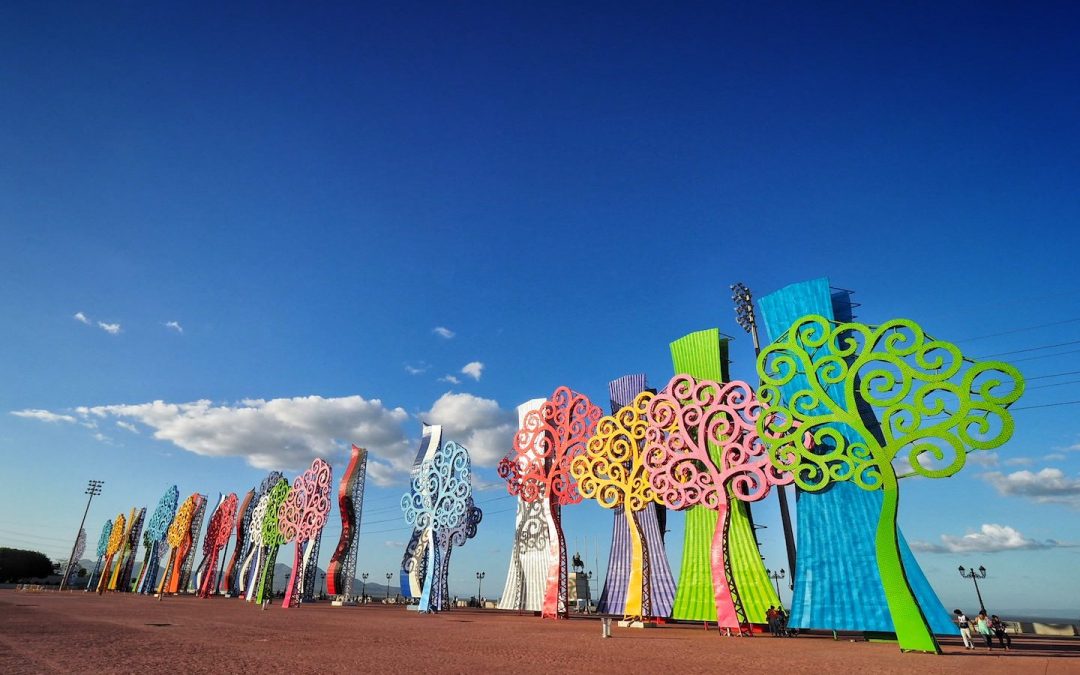 Welcome to Min-On’s Music Journey! Today the Min-On Concert Association and the Embassy of Nicaragua in Japan guide us to Nicaragua, a country of lakes and volcanoes in the middle of Central America and flanked by the Caribbean Sea and the Pacific Ocean on the east and west, respectively. 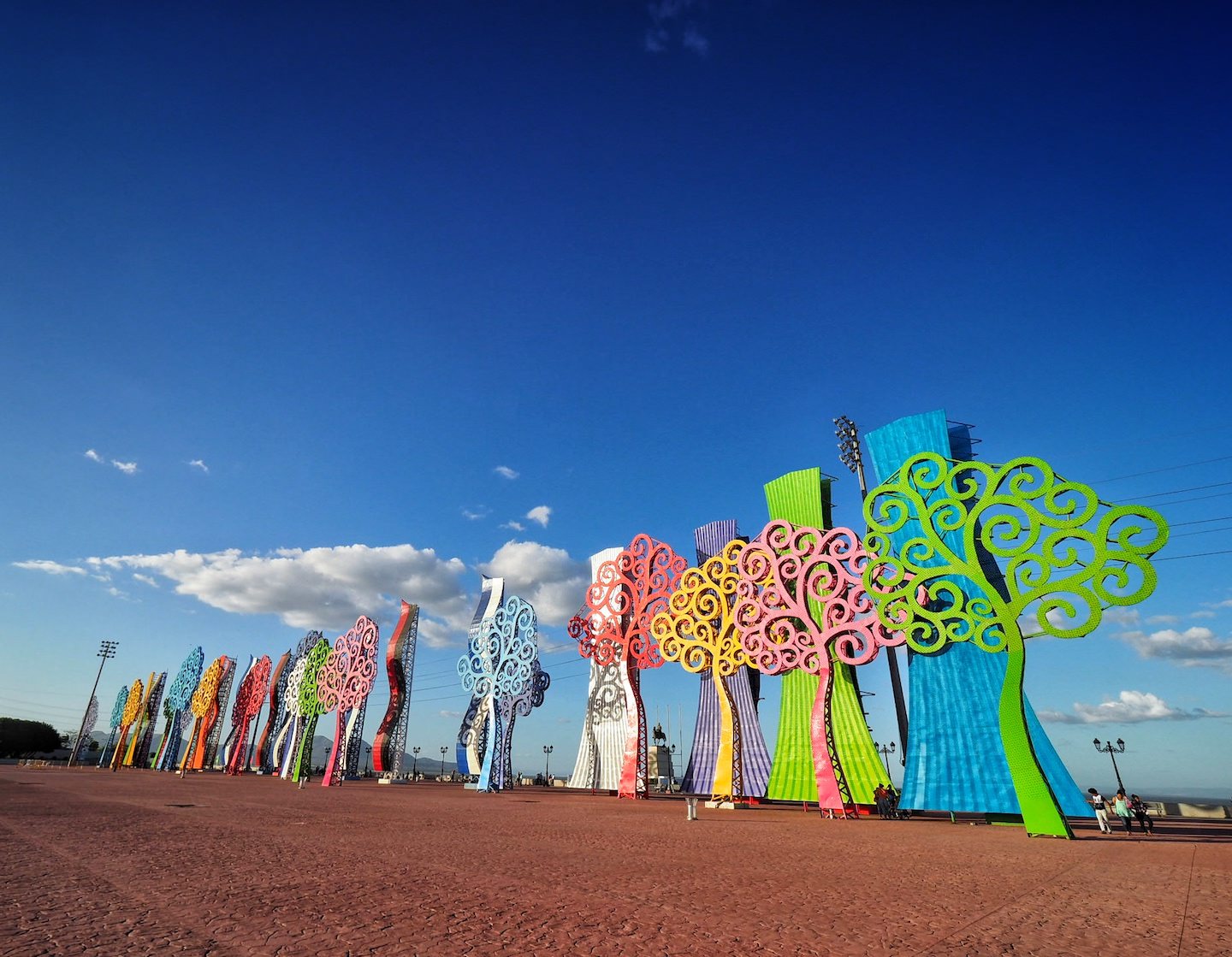 Tree sculptures on the shore of Lake Managua

Nicaragua is well-known for baseball and is the home of pitcher Dennis Martínez, who in 1991 pitched the 13th perfect game in Major League Baseball history. The Dennis Martínez National Stadium in the capital of Managua was named in his honor, and it’s packed with thousands of baseball fans every year. 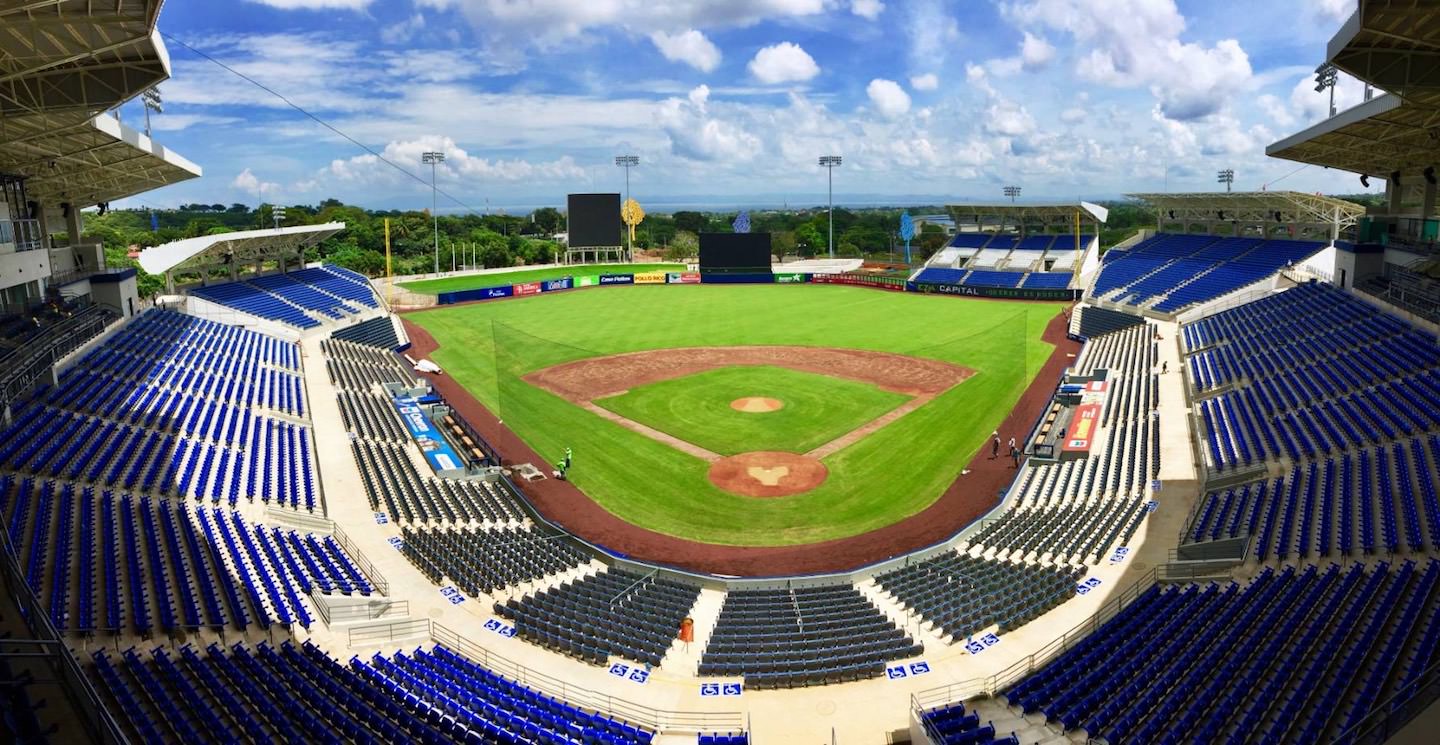 Popular recreation in the capital of Managua

The capital of Managua, with a population of 1.85 million people, is the second largest city in Central America. Colonial-era buildings including colorful churches and houses built in the Spanish colonial period line the city streets, preserving the look of that era. Located on the southern shore of Lake Managua, the city is surrounded by resplendent nature, including several deep volcanic lakes on its outskirts. 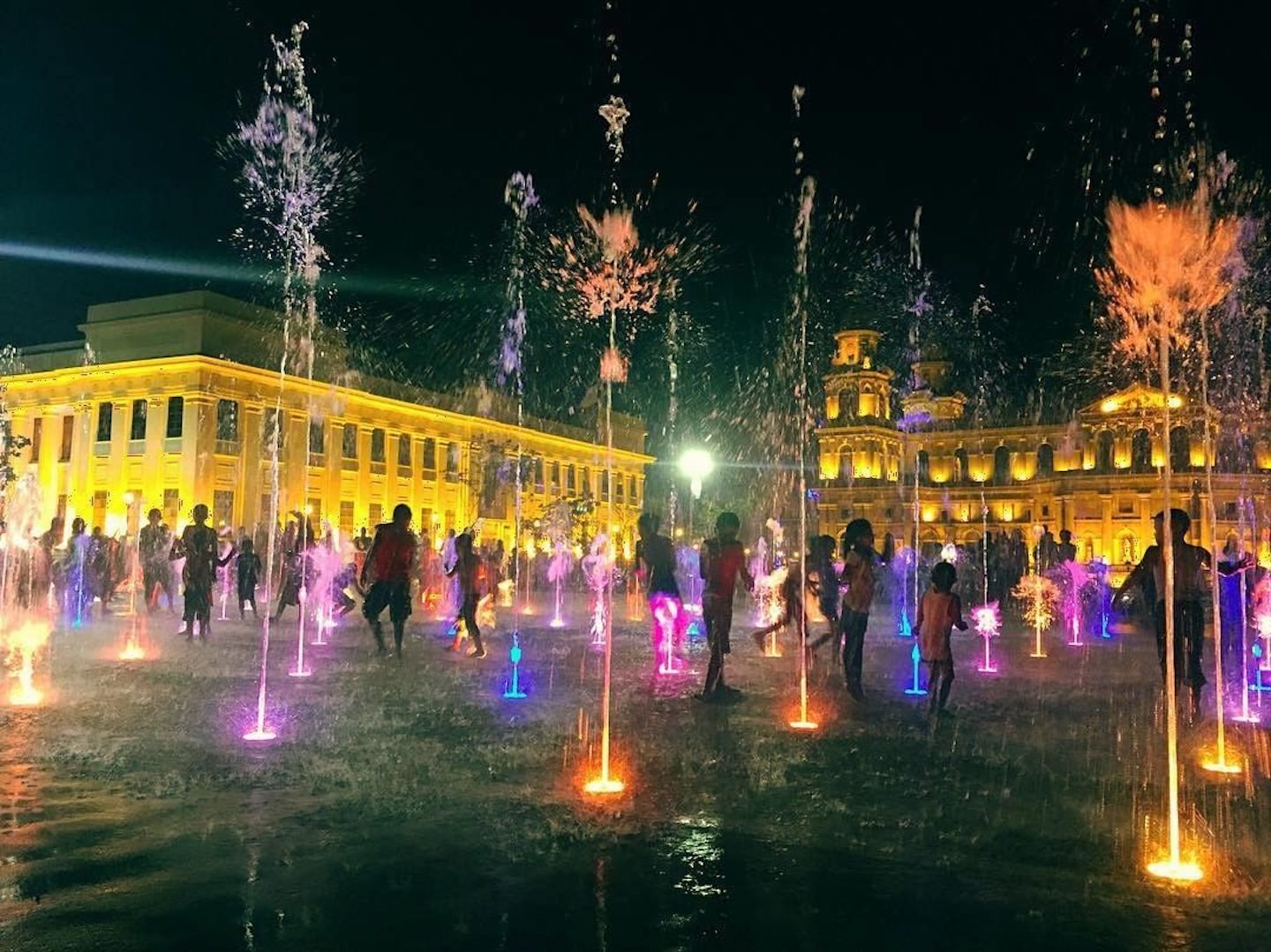 Fountains in the capital city of Managua

On the opposite shore of Lake Managua lies the Momotombo Volcano, and further south, the Masaya Volcano towers magnificently above the horizon. The solemn mountain is an object of appreciation for artists and has been featured in many paintings. Nicaragua is famous for “volcano boarding,” riding down the slope of a volcano, a sport that has turned many volcanoes into popular recreational areas.

The ancient city of Granada and World Heritage Site of León

The ancient city of Granada, to the southeast of Managua, was established in 1524 and played a pivotal political and economic role in Nicaragua’s history. It is located on the bank of Lake Nicaragua, Central America’s largest lake, and has many Spanish-influenced, colonial era buildings. Ometepe Island lies within Lake Nicaragua and is made up of up of two volcanoes, comprising the world’s largest island within a freshwater lake. It is blessed with a rich natural environment, and its 35,000 inhabitants make a living through farming, raising livestock and tourism.

León, located 80 kilometers northwest of Managua, flourished as the country’s capital since Nicaragua declared its independence in 1821 until 1855. Even today, it is one of the country’s most important locations. The city is home to the León Cathedral, the largest church in Central America, famous for its distinct Baroque and neoclassical architecture. It was registered as a UNESCO World Heritage Site in 2011.

The city of Granada (left) and the León Cathedral, a World Heritage Site (right)

San Juan del Sur is a port city on the Pacific Ocean located 140 kilometers south of Managua, and is the most popular beach in Nicaragua. Large numbers of foreign tourists visit here annually to enjoy surfing and other activities. Also, the Selva Negra forest lies in the highlands to the northeast of Managua. Locals grow coffee here, which is also home to over 200 species of birds, monkeys and other wildlife. 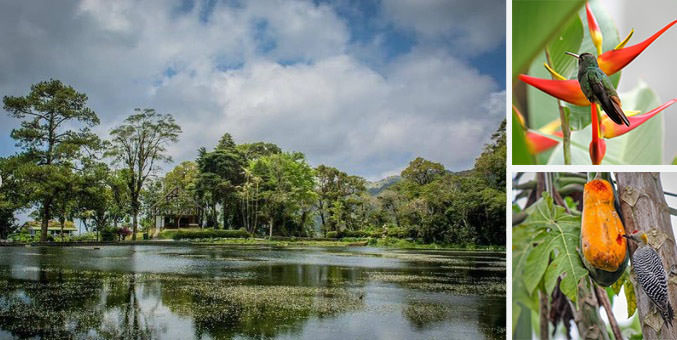 The unique cuisine of an agricultural powerhouse

Nicaragua has a strong agricultural industry and many popular foods are made using beans, grains, beef and pork. Well-known local dishes include gallo pinto, a fried dish of rice and beans, and vigorón, a salad of steamed cassava, pork and marinated cabbage served atop a banana leaf. Coffee and fruits like mangoes and plantains are also popular crops. 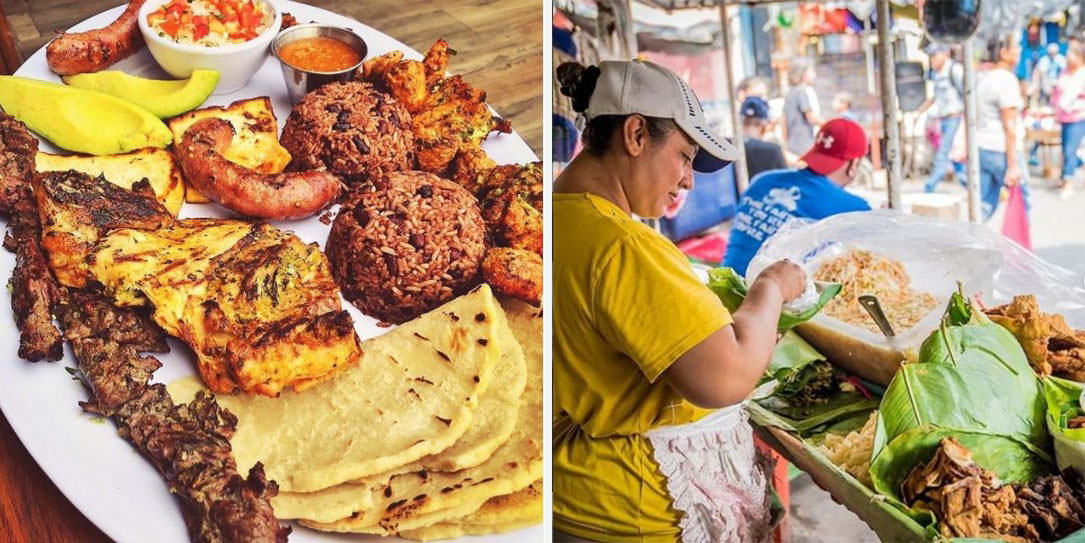 Nicaragua is known for a folk play called El Güegüense, an iconic Nicaraguan story combines theater, music and dance. Every January, it is performed in the city of Diriamba 42 kilometers south of Managua. In 2005, UNESCO declared this play to be a Nicaraguan Masterpiece of the Oral and Intangible Heritage of Humanity.

The Caribbean coastal area of Nicaragua has been influenced by African music, and the Palo de Mayo dance is widely known here. Its cheerful, energetic style has made it popular among tourists visiting the area.

In 2017, Min-On invited iconic Nicaraguan singer and songwriter Katia Cardenal and the popular band La Cuneta to perform in Japan. We would like to feature three of the songs from those performances here.

Finally, we would like to present four pieces of characteristic Nicaraguan music recommended by Ambassador Rodrigo Coronel Kinloch of the Embassy of Nicaragua to Japan.

The song and dance featured here pay homage to composer Camilo Zapata, who is an essential part of Nicaraguan music culture.

This tune by singer-songwriter Ofilio Picón is based on a poem written by Nicaraguan poet Salomón de la Selva that details his thoughts on the meaning of war. It became an instant hit.

Sacuanjoche, the national flower of Nicaragua, which represents grace, blessings and sunshine