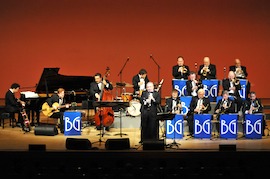 The “King of Swing” Benny Goodman and his orchestra was one of the most popular musical groups in America during the Swing Era that began in the mid-1930s, and helped secure a new place for jazz as “America’s classical music” on the American cultural scene.

Ken Peplowski, an alumnus of the Benny Goodman Orchestra, has been directing the legendary big band for occasional tours around the world, and now under the auspices of the Min-On Concert Association, they performed a thirteen-city Swing Jazz concert tour around the Kanto metropolitan area in Japan from September 23 through October 9, 2011.

The concert featured their iconic swing performances of Sing, Sing, Sing, Let’s Dance and Don’t Be That Way among many others, and accompanied by a guest singer and pianist Carol Welsman, they played a number of timeless jazz classics. The refined musicianship of each band member combined with a relaxed and warm performance served to swing and delight the audiences in Japan.