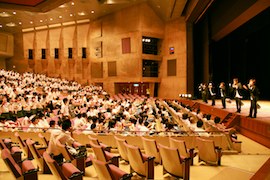 INSPi perform at the Min-On School Concert in Okinawa

The Italian term a cappella literally means ‘in chapel style’, and is used to describe music of specifically solo or group singing without instruments. Although originally used in reference to religious music, a cappella in modern usage often refers to an all-vocal group performance of any style, including pop and rock.

The Japanese popular vocal group INSPi—a leading a cappella group of six male singers—took to the stage in Okinawa as part of the Min-On School Concert series. This series has been held 63 times in Okinawa prefecture since it was started in 1974.

On April 26, despite a tropical squall, a total of 760 students from Taira and Kita junior high schools on Miyako Island, together with their teachers, gathered in the Miyako City Culture Center. Everyone was thrilled and inspired by the beautiful harmony of INSPi’s rich and dynamic voices as the group performed a number of popular songs.

The following day, INSPi visited the neighboring island of Ishigaki and performed at the Ishigaki City Civic Center for more than 800 students gathered from five different junior high schools. Besides the vocal performances, the members of INSPi gave a talk and some lessons in a cappella singing. Many students continued practicing their vocal harmony skills afterward, making the event a truly memorable occasion that had captured the joy of music.