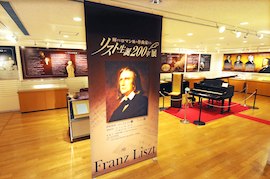 The year 2011 marks the 200th anniversary of the birth of the marvelous virtuoso pianist, Franz Liszt, who is also known as one of the most brilliant composers of the Romantic period. The Min-On Concert Association presents a special exhibition at the Min-On Music Museum from January 1 through July 3, 2011, entitled Brilliant Composers of the Romantic Period, celebrating the bicentennial of Franz Liszt’s birth.

In this special exhibition, the focus is on Franz Liszt (1811–86), born 200 years ago in Hungary and renowned as one of the most technically advanced pianists. Liszt was the most important and influential composer of the Romantic period, an era spanning the late 18th century through the mid 19th century, when composers began to express individuality, and when music came to be freely enjoyed by all. This era also signaled the appearance of composers who attempted to express—through music—deeper truths or human feelings that could not be expressed through language.

Alongside Min-On’s own collection of original musical manuscripts and personal correspondence written by Liszt and other composers of the Romantic period, there are explanatory panels that form an easy-to-understand introduction to the composer’s life and work. Through this exhibition, depicting an era in which the freedom of the citizenry brought a great flowering of musical culture, every visitor will feel the Romanticism that these artists bequeathed to us.