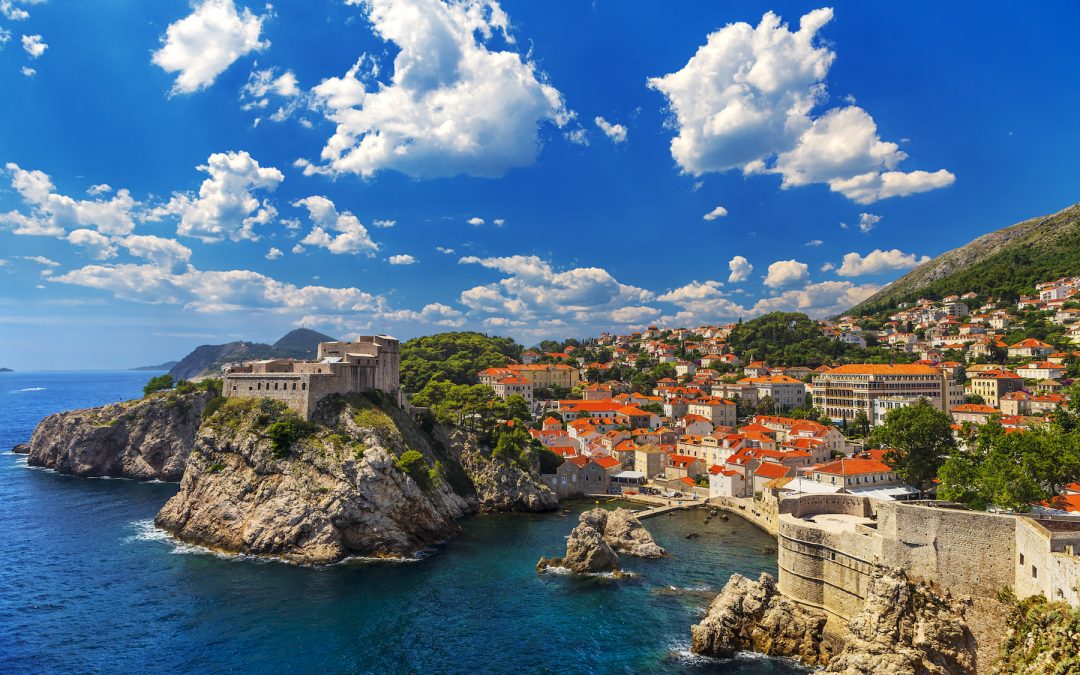 Welcome to Min-On’s Music Journey! Today, the Min-On Concert Association and Embassy of the Republic of Croatia in Japan welcome you to Croatia located in the northwestern Balkan Peninsula. 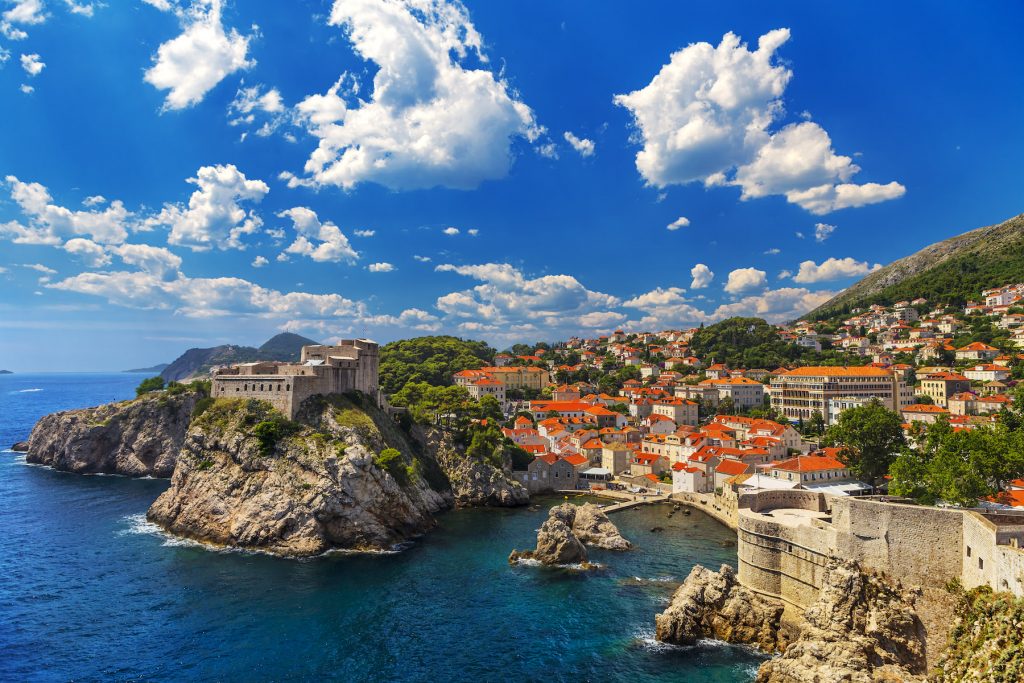 Croatia is about 1.5 times the size of Japan’s island of Kyushu and has a population of 4 million people, but over 18 million tourists—over 4x its population—come to visit the country each year, making it one of the top travel destinations in all of Europe.

The beautiful scenery of the city of Dubrovnik along the Adriatic coast inspired the setting of the Studio Ghibli movie Porco Rosso.

On today’s journey, we will travel to the three must-see cities in Croatia while enjoying Croatian music and performing arts.

The capital of Zagreb and the charm of old Europe

The capital of Croatia, Zagreb, serves as the economic and cultural center of the country, located in the northwest and home to 800,000 people. The beauty of Zagreb’s architecture gives it great charm. The old town is filled with many Renaissance and Baroque style buildings, creating a skyline of refined architecture that entices visitors with a nostalgic atmosphere of old Europe. 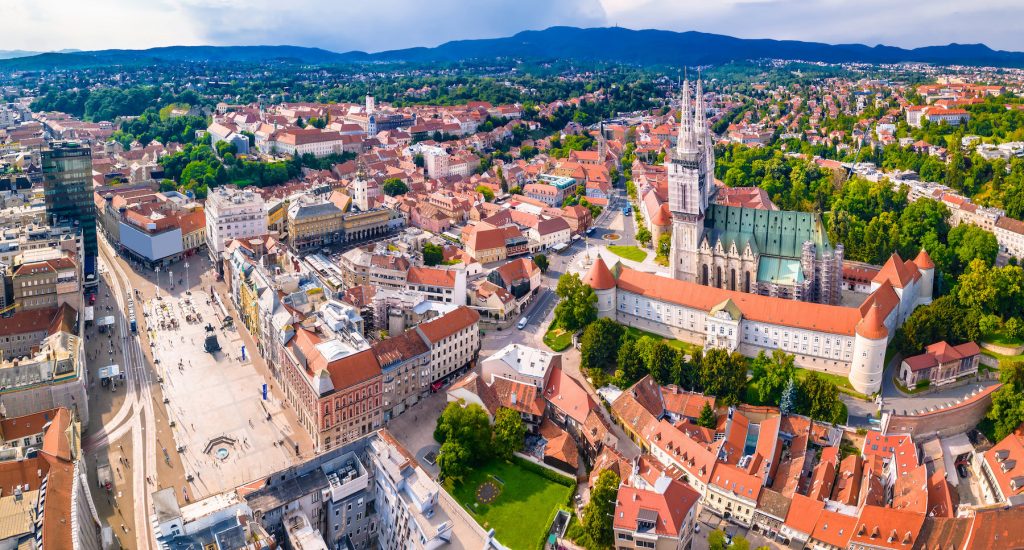 Zagreb also features areas bustling with events and markets that give visitors an unfiltered glimpse of locals’ daily lives, including Jelačić Square and Dolac Market Square. The latter is a market stocked with fresh local ingredients and known for its red and white umbrellas. This market is also called “the stomach of Zagreb.” We’d like to take this opportunity to showcase the traditional dance sukačko, passed down since antiquity in Prigorje, a village on the outskirts of Zagreb. This performance is from a concert of The National Folk Song and Dance Ensemble “LADO” hosted by Min-On in 2006. Sukačko is a dance traditionally performed by women while cooking for wedding celebrations.

The cheerful music, vibrant movement and colorful outfits are all highlights of this dance. Families in Prigorje hold onto these outfits with care and pride even today, when Prigorje has turned into a wealthy residential area.

The port of Dubrovnik, “Pearl of the Adriatic”

Dubrovnik lies in southern Croatia near the Adriatic coast. It has prospered as a port city and center of trade connected to the Mediterranean Sea since ancient times. Dubrovnik was also fortified city surrounded by castle walls 25 meters high. Today, the city still features many beautiful architectural styles represented in churches, palaces, fountains and more. Dubrovnik’s ropeway offers incredible views, allowing visitors to take in the city from the air. The stunning view of white buildings with orange roofs set against the azure Adriatic Sea has earned Dubrovnik the nickname “Pearl of the Adriatic,” and the city draws visitors from across the globe. 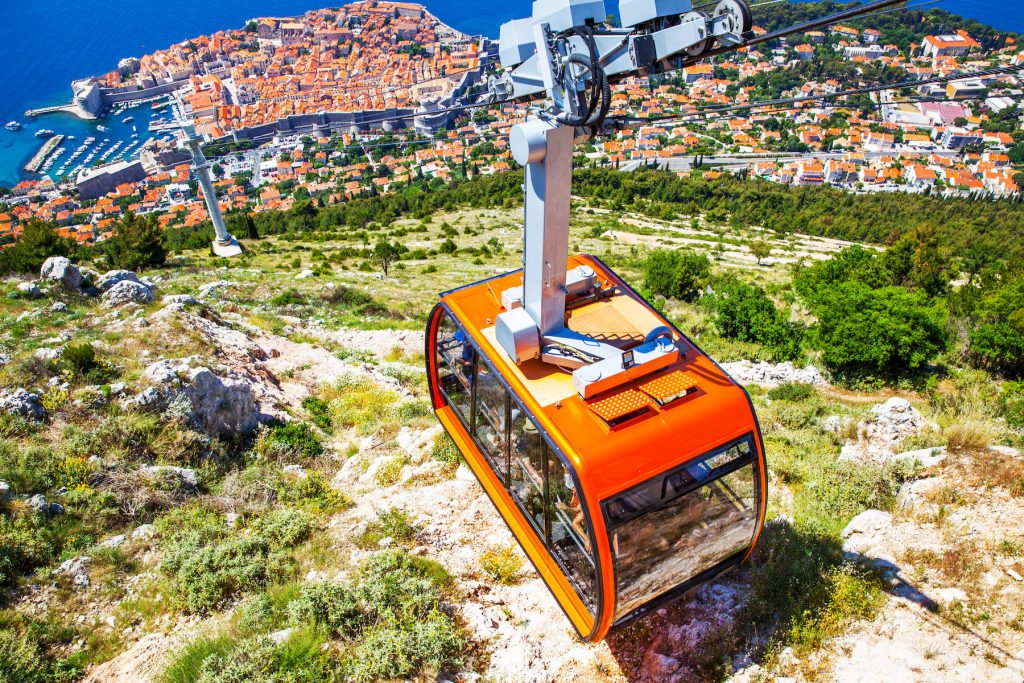 For a slower-paced way to absorb the city’s scenery, visitors may also find a restaurant or cafe along the flagstone-paved main street, Stradun. Enjoying fresh seafood that only a port city can offer while relaxing on a restaurant terrace is a fantastic way to enjoy Dubrovnik. 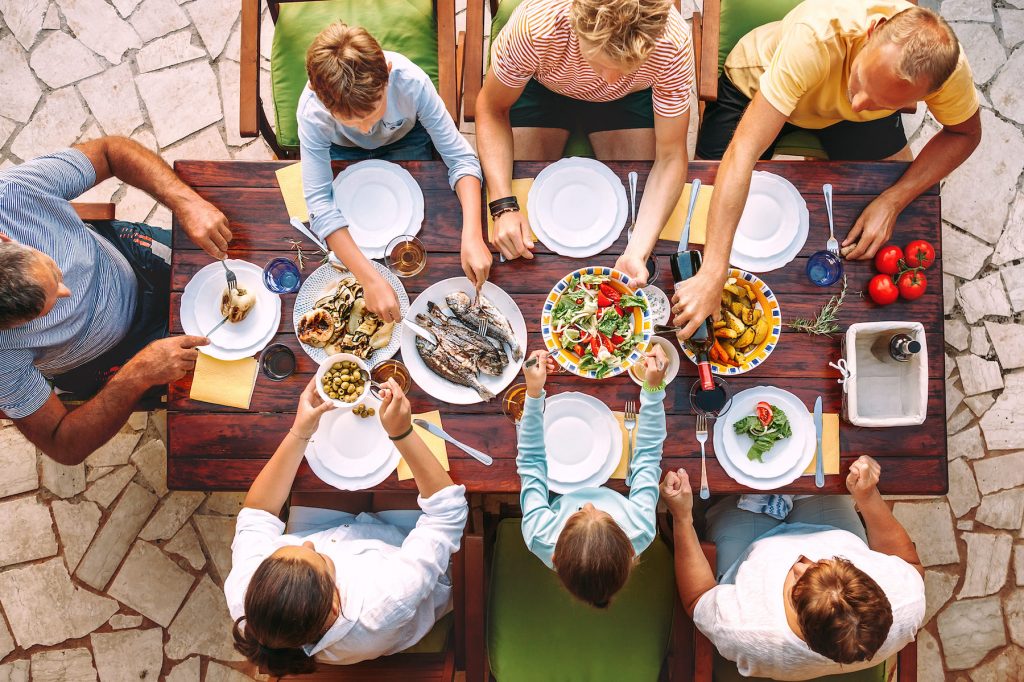 Every summer, the city holds the largest theater and music event in the country, the Dubrovnik Summer Festival. The festival takes place for 45 days from July 10 to August 25. This festival is like something out of a dream—notable artists from across the globe gather to perform against the backdrop of Dubrovnik’s romantic scenery. Split, a melting pot of ancient and medieval architecture

Heading north from Dubrovnik along the Adriatic coast leads to the second-largest city in Croatia, Split. The old town of Split has an unusual origin. The original structure of the city is based around the palace of where the deposed Roman emperor Diocletian lived at the beginning of the 4th century. 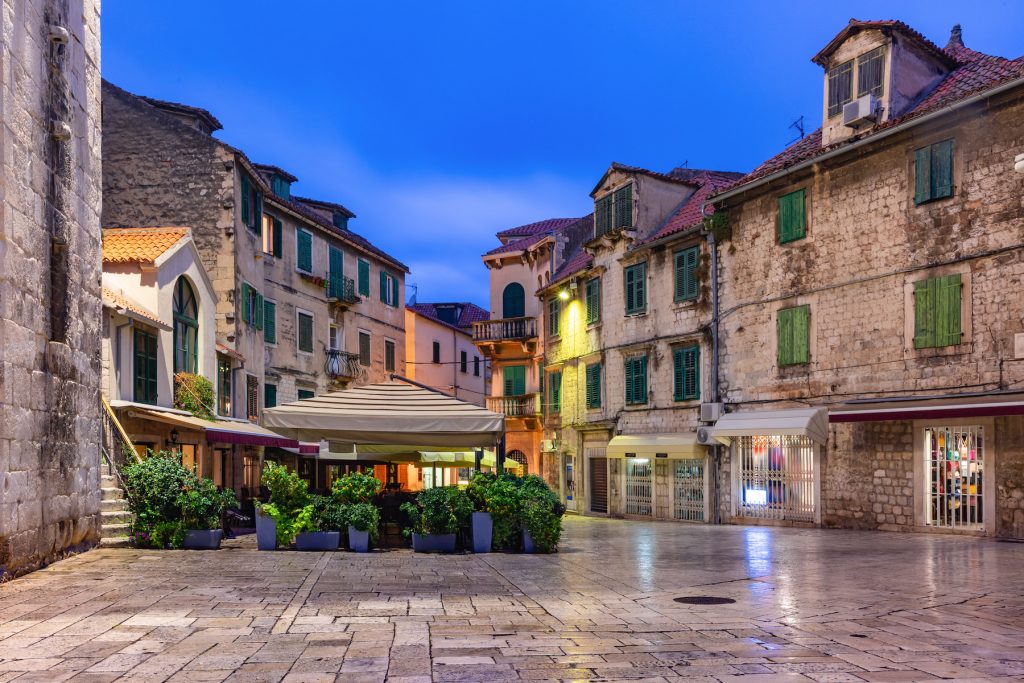 This city has an especially long history even for Croatia, with ancient and medieval buildings mixed in amongst other buildings along its streets. UNESCO registered the “Historical Complex of Split with the Palace of Diocletian” as a World Heritage Site in 1979. 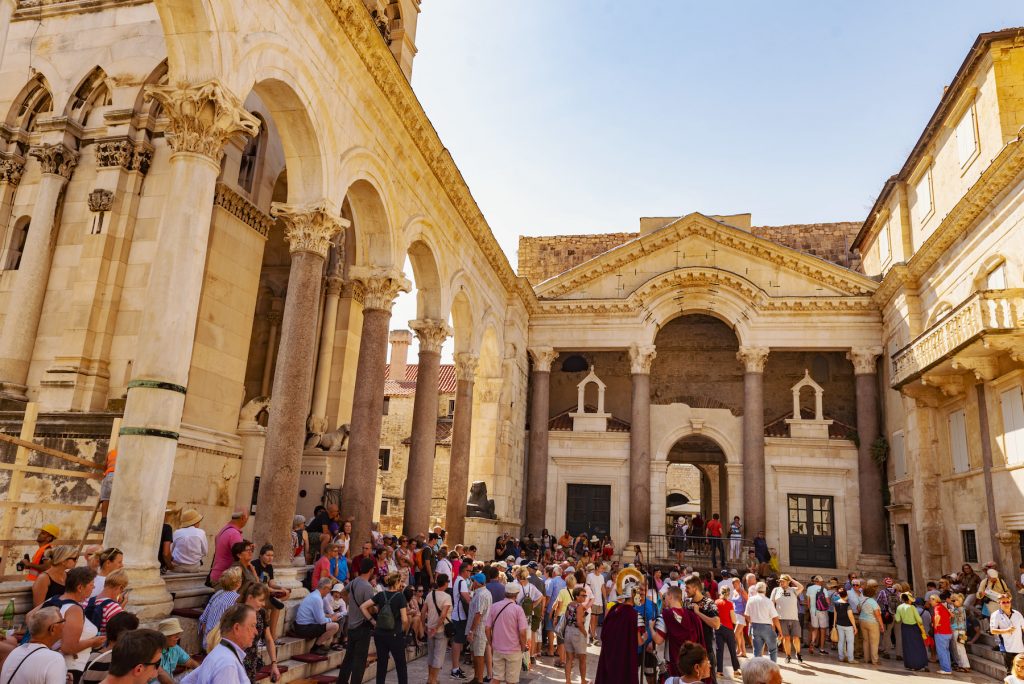 The north-eastern part of Croatia, especially the lowlands, has a rich history of developing different musical instruments. Let’s take a short break and listen to “Šokački sastanak (Shokachki Gathering),” which features a solo on a traditional Croatian instrument. This performance is also from the LADO concert above.

The perfect souvenir: a necktie from Croatia

Zagreb is home to world-renowned shop specializing in neckties. Croatia is the birthplace of the necktie, and it dates back to the 17th century, although there are many theories on its original origin. 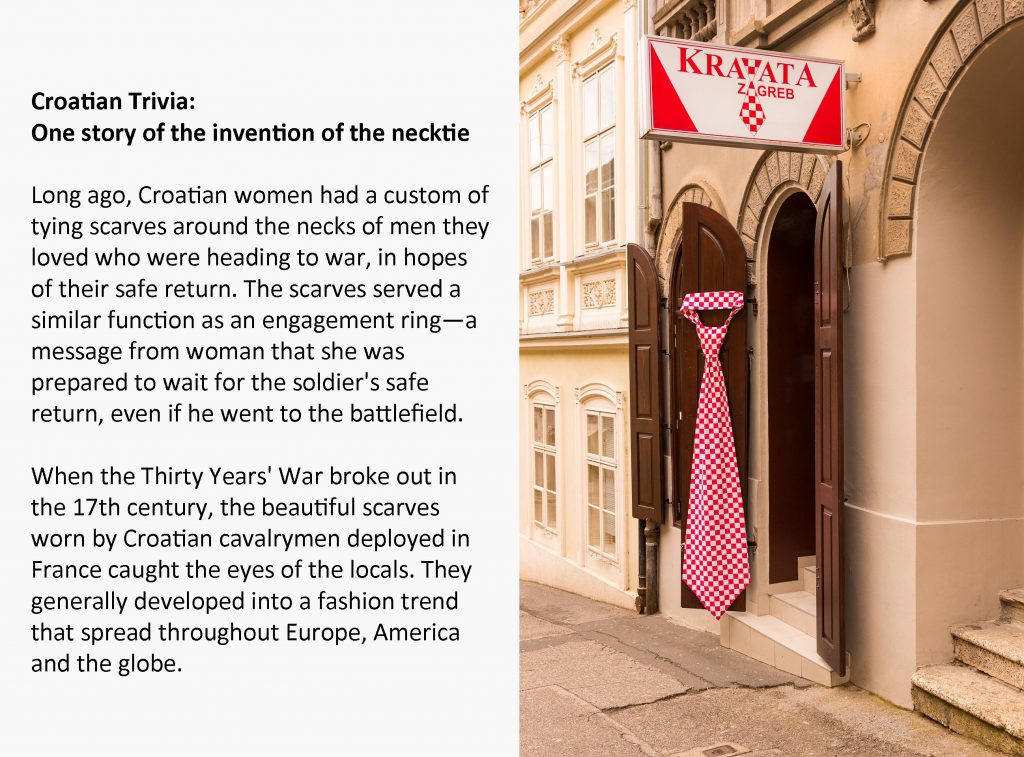 Croatian ties are made of high-quality material and feel wonderful to the touch. They’ve been presented as gifts to celebrities all over the world and are a popular souvenir item. In addition to its main shop in Zagreb, Croata also has branches in Dubrovnik and Split, making for a convenient stop in all three locations.

Musician recommended by the Embassy of Croatia

In closing, we would like to introduce pianist Yoko Nishii, an artist recommended by the Embassy of Croatia in Japan.

Ms. Nishii is a pianist based in both Japan and Croatia, acting as a cultural bridge between the two countries. She hosts performance in Japan and abroad, and is also involved in research into composers from the former Yugoslavia, including Croatia. In February 2015, she released the first album in the world featuring every piano solo composed by female Croatian composer Dora Pejačević (1885–1923), titled “Dora Pejačević: Complete Piano Works” (double-disc set). The album was selected as a feature in a special edition of Record Geijutsu magazine.

We hope you will enjoy these three pieces, including two by Dora Pejačević. 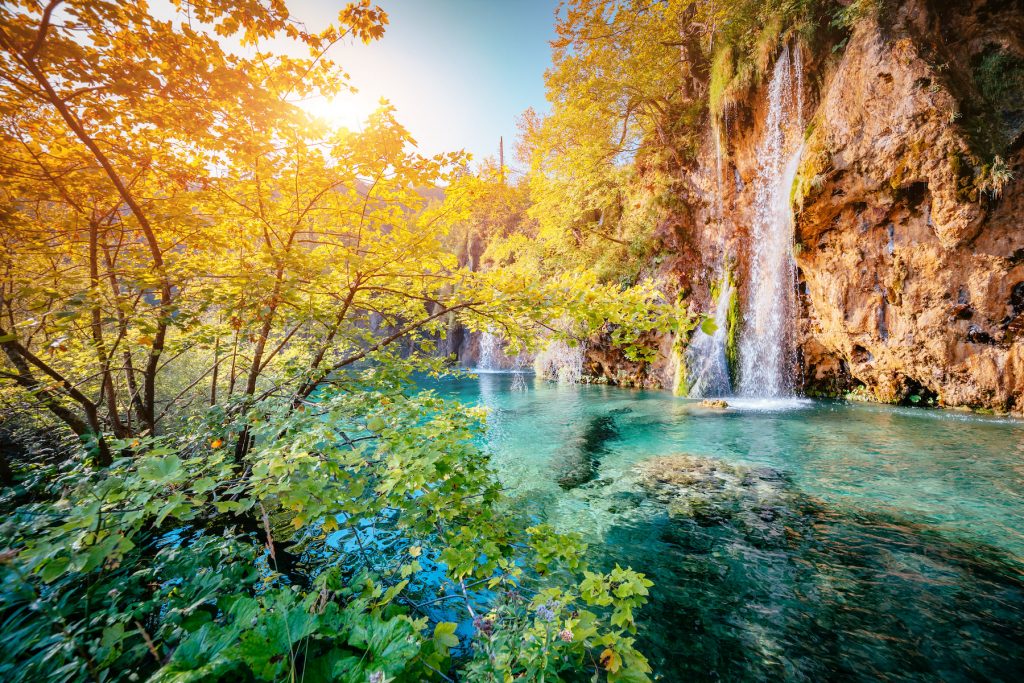 What did you think of your music journey to Croatia? There are still many more places to go! Please look forward to our next destination.

(Produced in collaboration with the Embassy of the Republic of Croatia in Japan.)