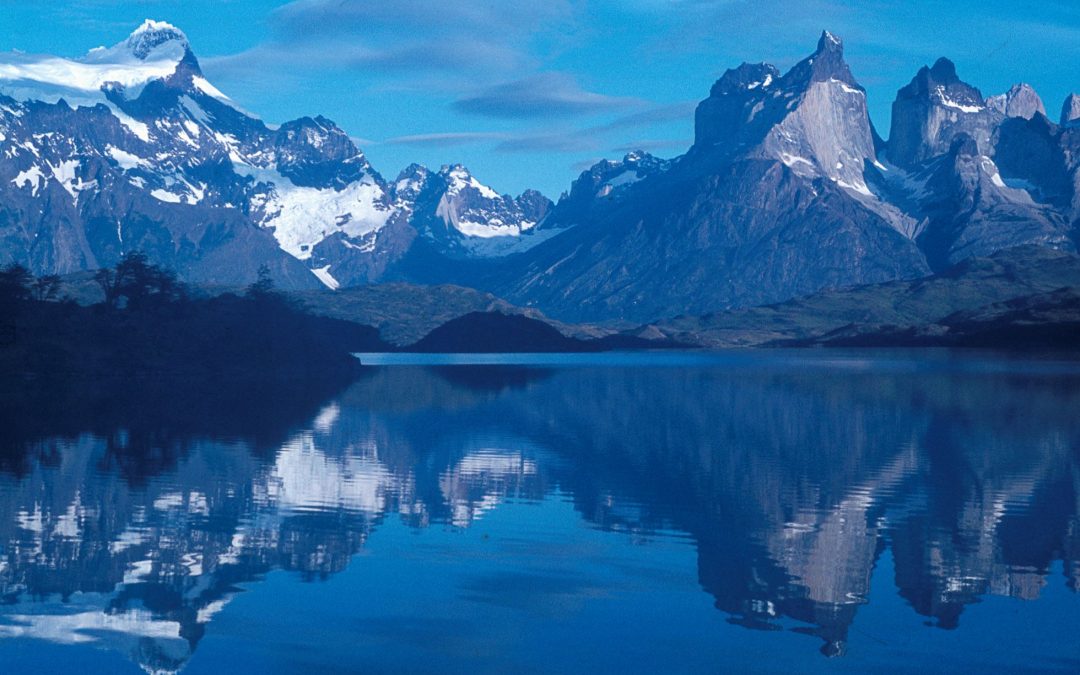 Welcome to Min-On’s Music Journey! Today, the Min-On Concert Association and Embassy of the Republic of Chile in Japan welcome you to Chile, located on the Pacific side of the South American continent. This year (2022) marks 125 years of the establishment of diplomatic relations between Japan and Chile.

Chile is a long and narrow country extending from north to south. Because the single country crosses so many latitudes, it has many different climates and biospheres.

Although a single country, Chile is full of amazing locations that defy singular conception. Chile is also known as an “island continent” due to its vast north-south length, stunning landscapes and awe-inspiring biospheres. Thank you for joining us today on our music journey to Chile! 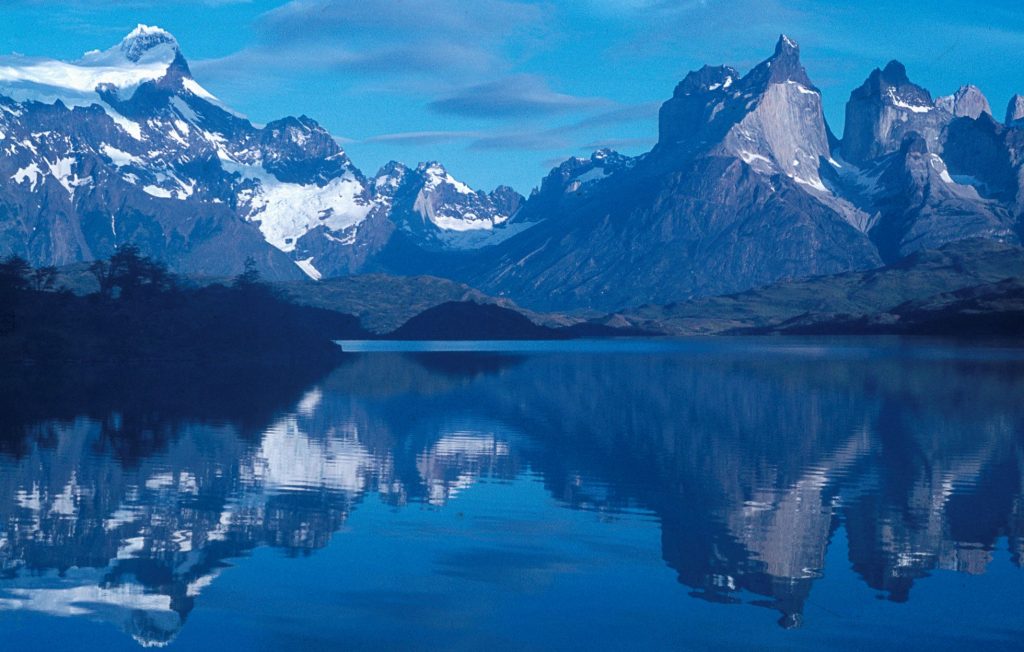 Northern Chile: The Atacama Desert, the driest place on earth

Bordering Bolivia and Peru, northern Chile comprises a vast arid region that includes the Atacama Desert. This desert is one of the driest places on the planet—some areas receive less than one millimeter of rainfall per year. 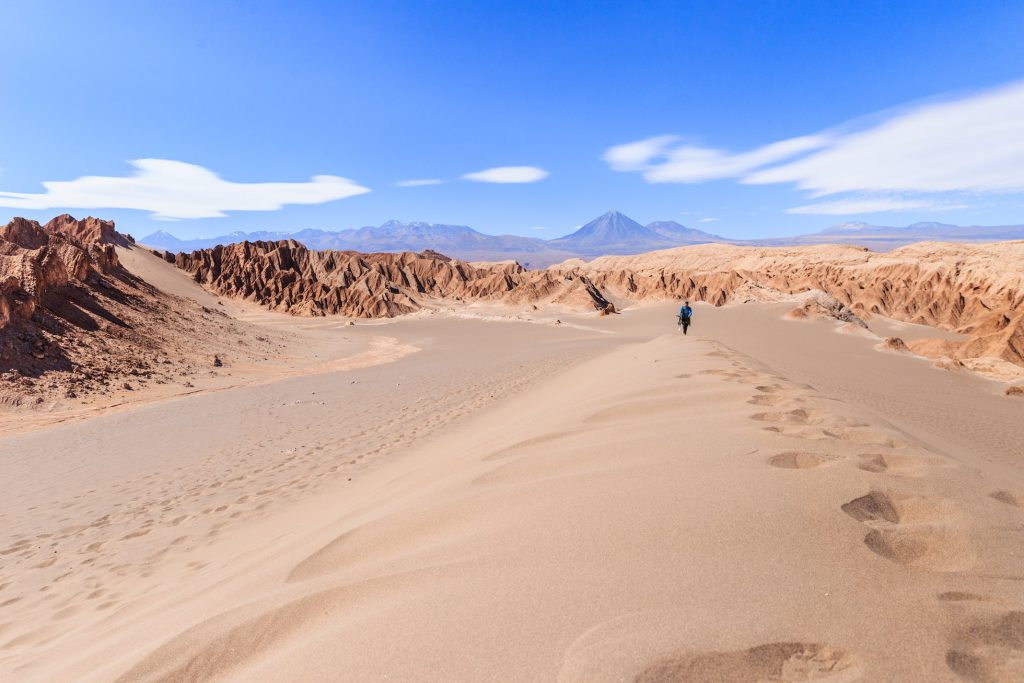 The Atacama Desert an ideal place for stargazing, with clear skies almost year-round and exceptionally clean air. Visitors come here to see the stars, and many countries, including Japan, have built observatories here. 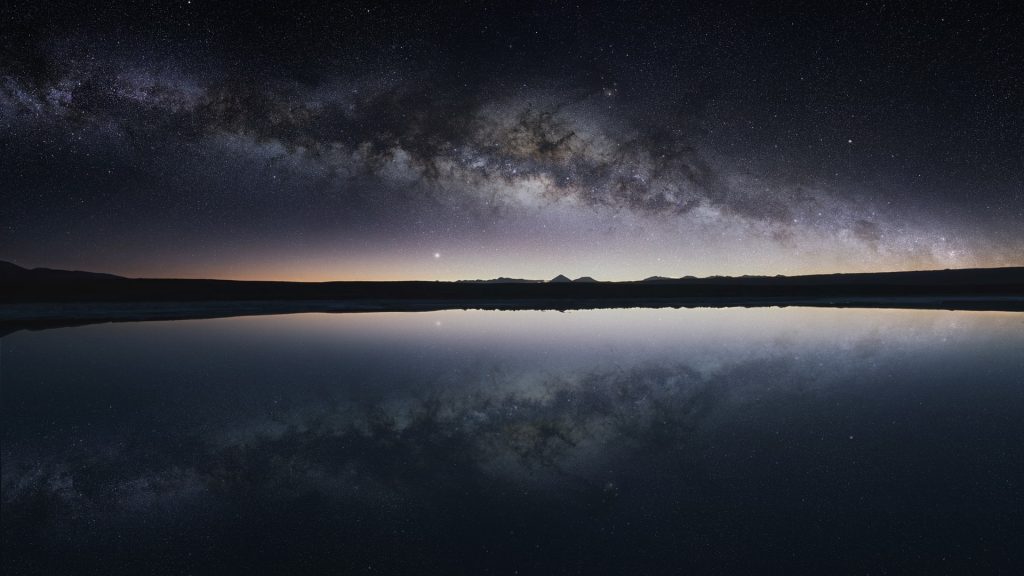 The desert is also famous as one of the world’s most beautiful for its romantic scenery, including endless landscapes of rocks, sand, plains covered with rainbows of flowers and crystal-clear salt lakes.

Northern Chilean music has a lot in common with Bolivian music. Because northern Chile also borders the Andes, it also features Andean instruments like the quena and zampoña. Please enjoy listening to the following pieces by the Ballet Folklórico Nacional de Chile from their 1990 concert at Min-On that express key features of northern Chilean music.

Central Chile: The capital of Santiago, historical and cultural center

Central Chile has a warm, Mediterranean climate, making it the most comfortable region of the country to live in. Underground streams flowing from the Andes have given the plains of central Chile rich soil, and the area is famous for its grains, tomatoes and grapes.

The capital of Santiago is a modern metropolis that about 40% of the population calls home. It is also the cultural center of Chile, including many museums and educational institutions.

Santiago’s old town is centered around the Plaza de Armas, a place of leisure for the locals. It contains many historic structures and sightseeing locations like the Metropolitan Cathedral and La Moneda Palace, which serves as the office of the President. Many popular restaurants and shops selling daily necessities also line the streets in this area of the city, making it a central location in the lives of local people. It is difficult to try to put all the music of Chile into one category, due to its varied regions. Still, one iconic style of Chilean music is cueca, which developed in central Chile.

Cueca is a traditional dance—men and women in traditional attire face each other in pairs and dance to the accompaniment of guitars, accordions and singing. It’s said that the dance mimics the courtship rituals of birds. The lively dance steps trace a circle on the dance floor and the dancers twirl handkerchiefs to represent romantic conversation.

Although it is a national dance used at important events like independence day festivals and weddings, just like the diverse climates of Chile, the style of this dance also differs by region. 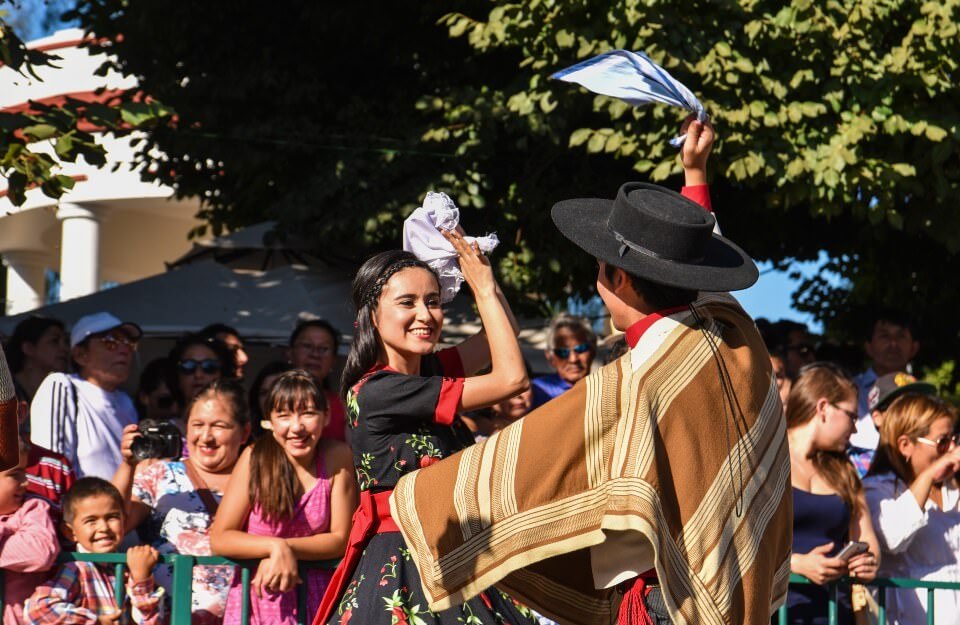 Southern Chile towards the tip of the Southern American continent has a rainy, oceanic climate. The average rainfall increases steadily as you travel further south. Some areas are subject to heavy rains totaling over 5,000 millimeters per year, and southern Chile has a very different climate and environment than the arid north and temperate central regions.

One aspect that makes southern Chile special is definitely its beautiful forests and lakes. Across the vast area from the ancient capital of Valdivia to Puerto Montt, visitors will find a nearly mystical landscape of woodlands filled with broad-leaved evergreens and conifers standing tall around a vast number of lakes and ocean inlets. Further south of Puerto Montt lies Chiloé Island, an archipelago made up of several islands. One of the island’s major tourism destinations is a grouping of 16 wooden churches that UNESCO registered as a World Heritage Site in 2000.

Another highlight of Chiloé Island are its colorful houses standing on stilts above the water. The unique scenery of their vivid hues reflected on the water’s surface have made this location a popular tourist destination. 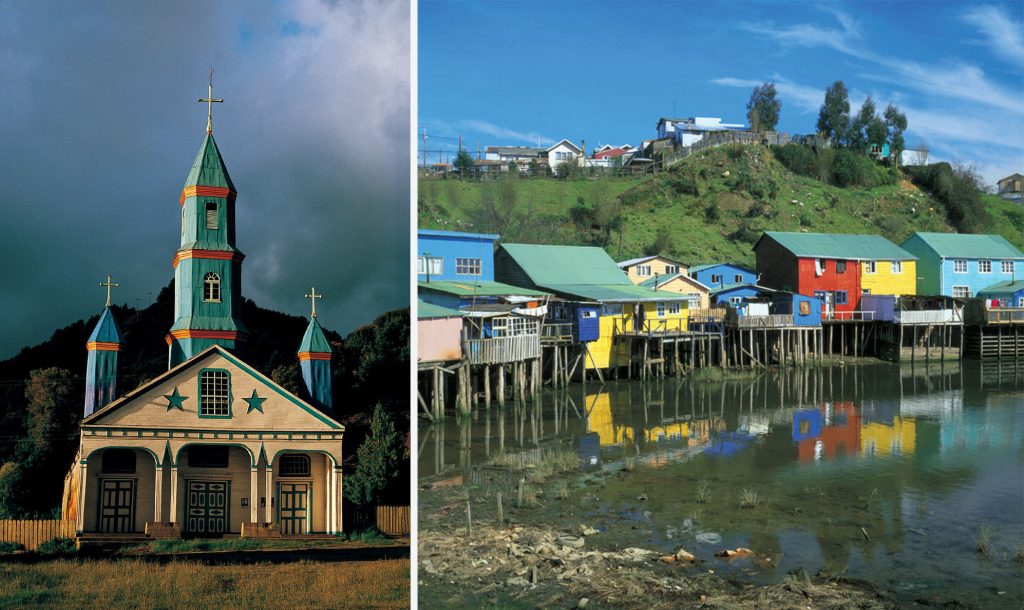 Please enjoy listening to the following piece performed at a concert of the Ballet Folklórico Nacional de Chile. It features motifs of the diverse ways of life of the people of Chiloé Island.

Travel even further south through southern of Chile to reach the snow-covered, mountainous and glacier-filled region of Patagonia. The area lies at a relatively high latitude of 50 degrees south and spans across Chile and southern Argentina. One of the cities in this area, Punta Arenas, is also known as the gateway to Antarctica, because it is just a two-hour plane ride from the southernmost continent and site of the South Pole. 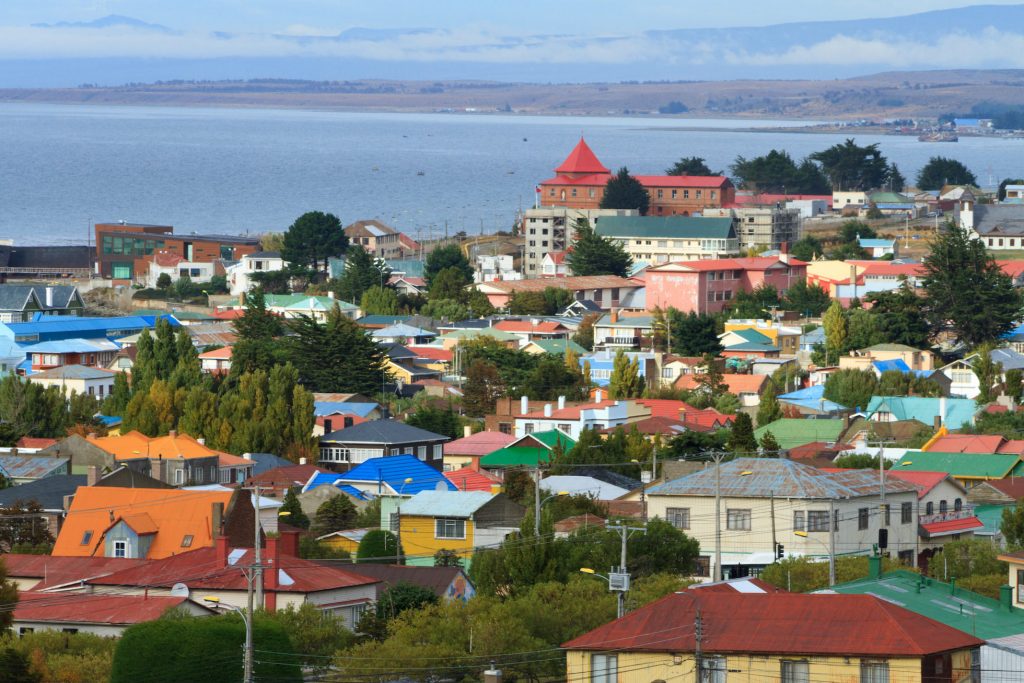 There are a total of 30 national parks in Patagonia. In particular, the Torres del Paine National Park in Chilean Patagonia is famous for hiking trails that offer breathtaking views of glaciers and plains stretching over the horizon. In contrast, Easter Island lies 3,700 kilometers west of the Chilean coast. With a warm and humid subtropical oceanic climate, the island is a tropical location completely different from Patagonia. Easter Island is called “Rapa Nui” in the indigenous language. UNESCO registered the island as a World Heritage Site in 1995 as part of the Rapa Nui National Park. 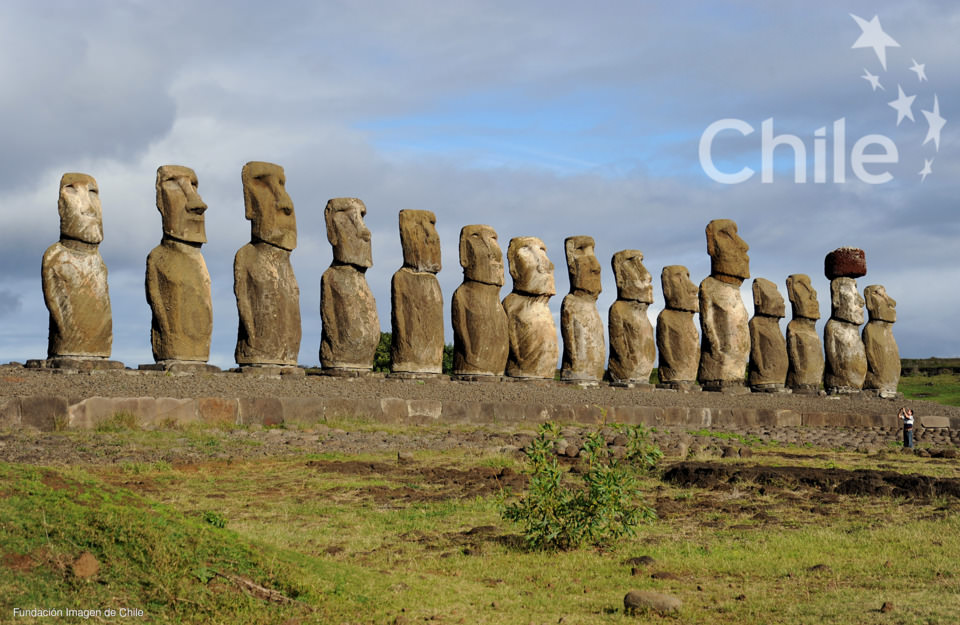 The culture of Easter Island originated from the Polynesian people who migrated here around the 14th century. As a result, local music and dance is characterized by inherited Polynesian traditions. Please enjoy listening to “Rapa Nui” from the Ballet Folklórico Nacional de Chile concert.

Chile is one of the three major global producers of lapis lazuli, a rare blue gemstone. This gem is called ruri in Japanese, after its deep, beautiful blue color. Accessories made of lapis lazuli are popular all over the world. At Chilean folk art markets, you can also find crin weaving, the world’s only handicraft made from the hair of a horse’s tail. For another intriguing souvenir, we recommend the traditional Chilean spice merken. This all-purpose seasoning goes well with everything and has the appealing aroma of smoked chili peppers.

Next we would like to introduce “Nueva Canción Chilena,” or “New Chilean Song,” a movement in the 1960s that has given rise to a new generation of Chilean musicians inspired by this movement. 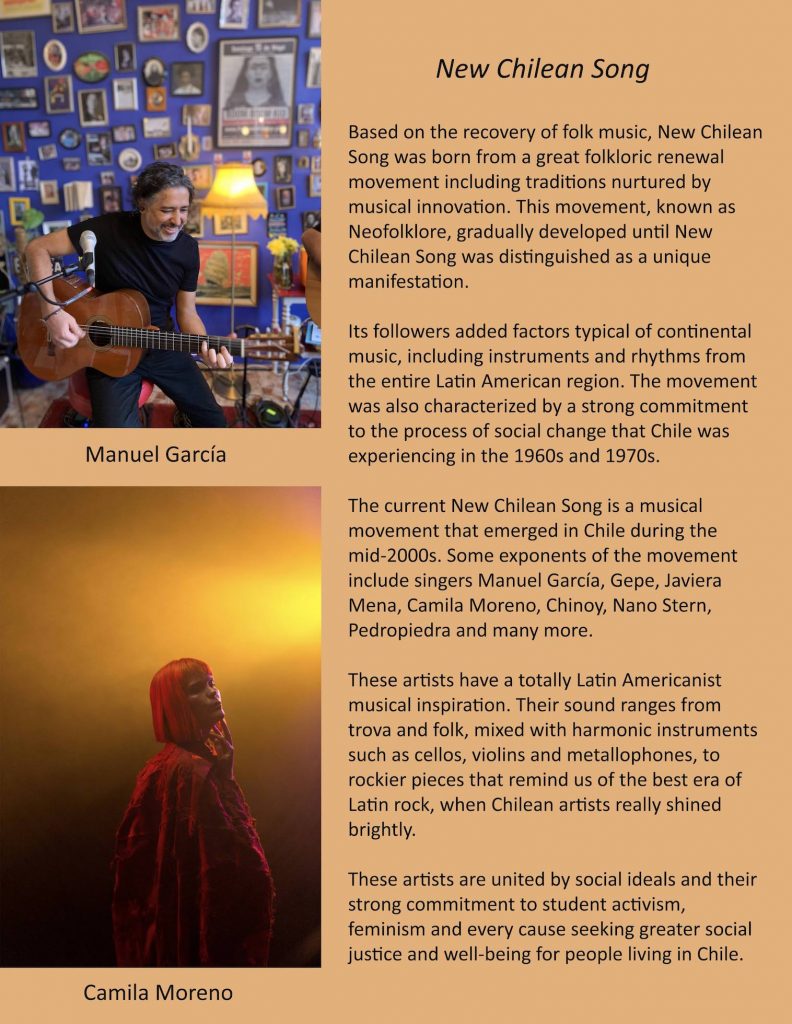 In closing, we would like to introduce musicians recommended by the Embassy of the Republic of Chile in Japan.

First, please enjoy three pieces from Camila Moreno, a singer-songwriter who represents Chile. She was nominated for a Latin Grammy in 2009, and her album Mala Madre, released in 2016, won three Pulsar Awards for best musical work in Chile.

Next, please enjoy three pieces from Manuel García, one of the famous singer-songwriters and guitarists in Chile. He won the Chilean Music Award in 2008, and he was the only Chilean to win the Gardel Prize for Best Concept Album for his duo Abrazo de Hermanos with Argentina’s Pedro Aznar in 2020. He has toured not only in Chile, but also in Mexico, the United States, China and around the world.

What did you think of your music journey to Chile? (Produced in collaboration with the Embassy of the Republic of Chile in Japan, who also provided photos.)