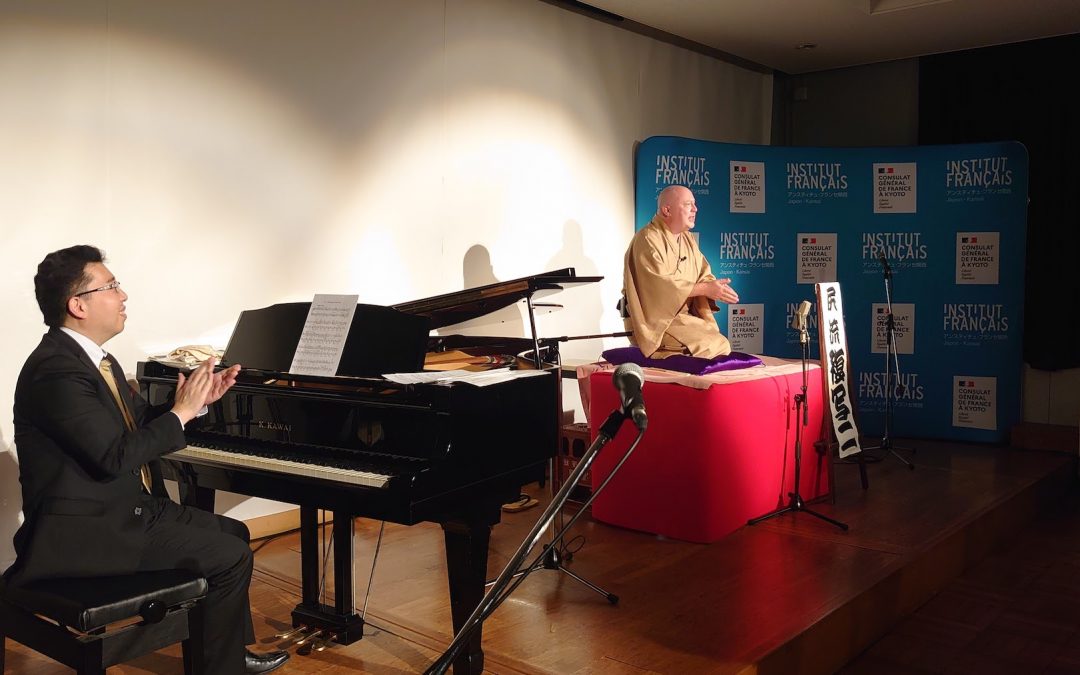 The Min-On Music Museum Lecture and Concert Program’s “Cyril and Seiji—Piano and Rakugo Concert” was held on Friday, June 25 at Kyoto, the sister city of Paris. At the event, which was held at Institut Français du Japon – Kansai, the local Consul General of France, Mr. Jules Irrmann shared his words of greetings, in which he emphasized the importance of the comedy especially during the pandemic.

At the concert, the French rakugo (Japanese traditional comic story-telling) comedian Cyril Coppini and pianist Seiji Honda, who studied at the Conservatoire de Paris, gave a joint performance. Cyril’s rakugo performance, in fluent Japanese, filled the venue with unending laughter. Seiji Honda played pieces by composers related to France. The audience expressed their joy of listening to live music and comedy by giving a huge round of applause.

At the joint performance of rakugo and piano, Seiji Honda played the debayashi (music played at performer’s appearance) as Cyril appeared on stage. The comic dialogue between the two performers who staged a French version of the “Jugemu” story filled the venue with laughter and applause.

The audience commented saying, “I really enjoyed the performance. Merci!”, while another said, “the piano and rakugo joint performance was absolutely exquisite.” Another said, “the collaboration was unique,” “I was wonder-struck by Cyril’s rakugo,” and “thanks to Seiji’s explanation of the piece before he performed, I could picture the scene during his performance.”

The live streaming of the concert on YouTube was viewed by some 7000 people. We wish to thank the Min-On subscribers, without who this performance would not have realized. Thank you all!