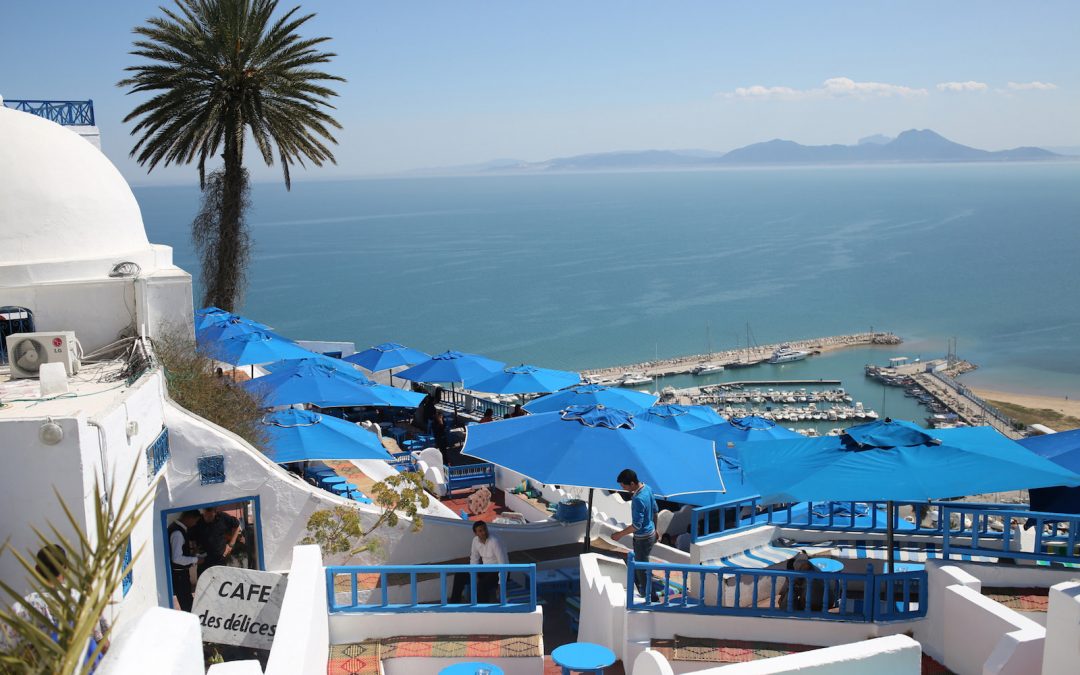 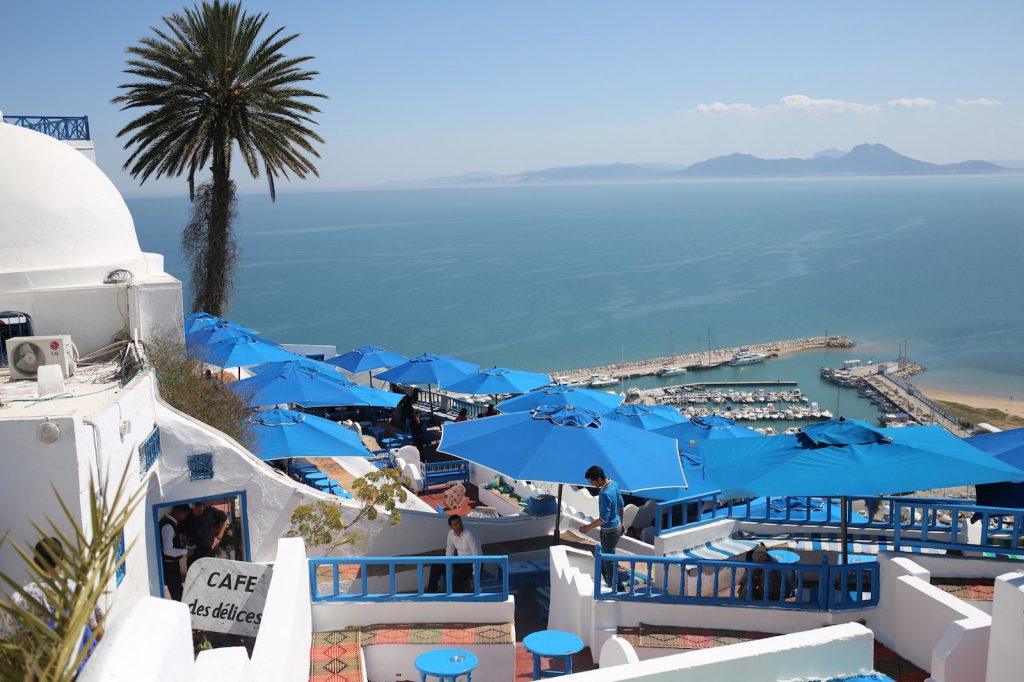 Tunisia is a hidden gem in North Africa with many alluring aspects, including exquisite cityscapes along the Mediterranean Sea, ancient ruins registered as World Heritage Sites and the Sahara Desert, which has served as the filming location for Star Wars and many other movies. The mixture of Roman, Arabic and French cultures across Tunisia’s 3,000 years has given the country a rich history of cultural integration.

The capital of Tunis is split into a modern district, with a European atmosphere, and a historic district called the medina that brims with Islamic culture. UNESCO registered the Medina of Tunis as a World Heritage Site in 1979. The mosque here is the oldest in Africa and is a sacred grand mosque for Muslims. The medina flourished as a trade hub with the Far East in the 14th century, and the mosque remains at its center, surrounded by castle walls and a moat. 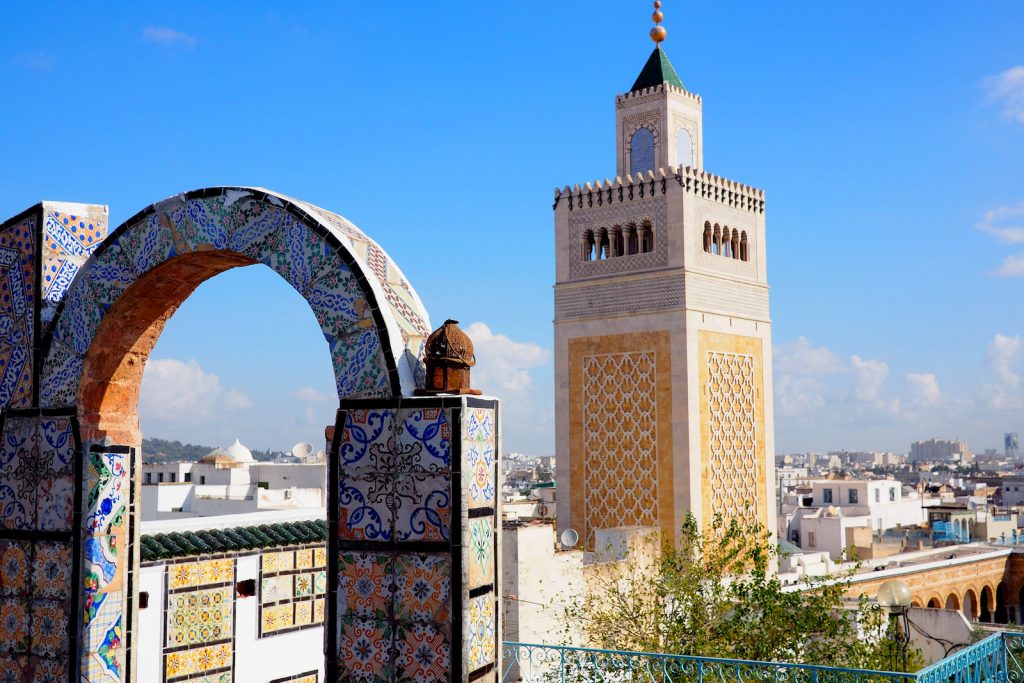 Avenue Habib Bourguiba is the modern district’s main street. Outdoor cafes, boutiques, hotels and more line this lively avenue, which is always bustling with locals and tourists. Bardo National Museum is called “the Louvre of Tunisia” for its ancient Roman artifacts, artwork and world-class collection of mosaics. 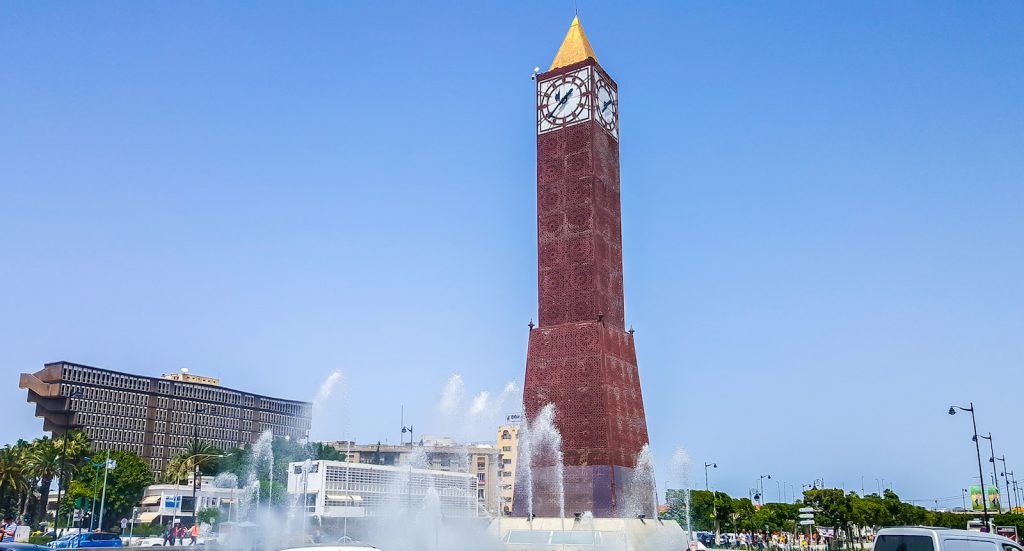 Tunisia’s third-largest city of Sousse lies at the center of Tunisia’s Mediterranean shoreline along a flourishing beach resort area. UNESCO registered the city’s historic district as a World Heritage Site in 1988, and it has garnered attention for its well-preserved historical architecture from the 7th century.

The Amphitheatre of El Jem is a World Heritage Site in central Tunisia that was built in the 3rd century. The ancient Roman structure has an outer circumference of 400 meters and could originally accommodate 35,000 spectators. The awe-inspiring, massive 1,800 year-old structure is the largest amphitheater in Northern Africa, and also home to the International Symphony Music Festival in El Jem every year. The opportunity to watch performances by both Tunisian and international orchestras in this historic location make the festival very popular. 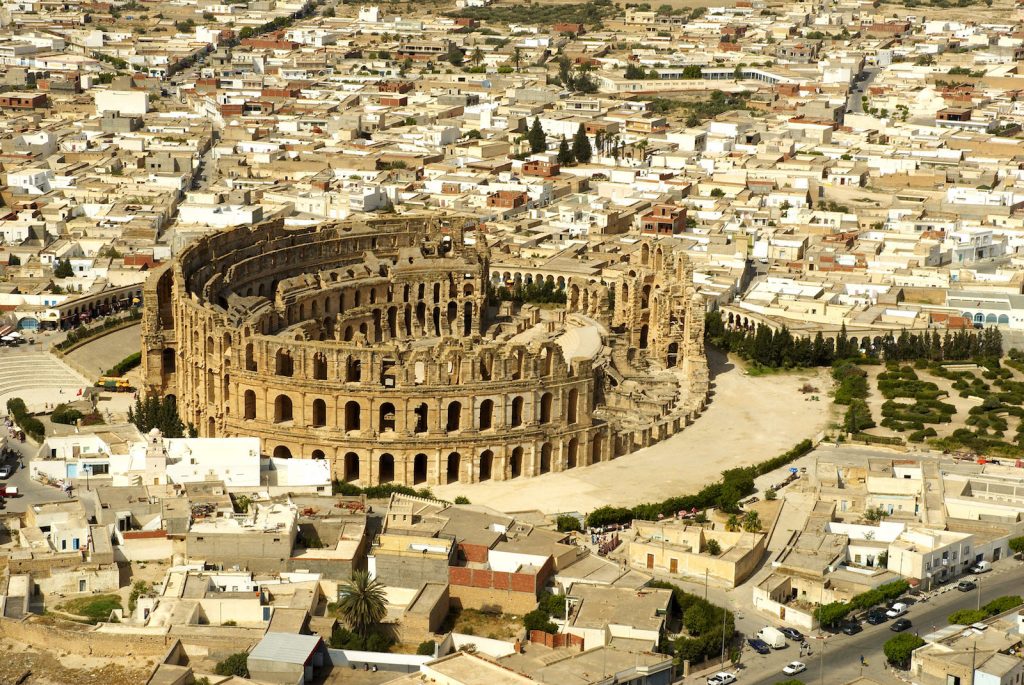 The Dougga Ruins are Tunisia’s largest Roman ruins. The site is remarkably preserved, and facilities including outdoor theaters, temples and public baths show what life was like in the 2nd–3rd centuries BC for the city’s 10,000 inhabitants. 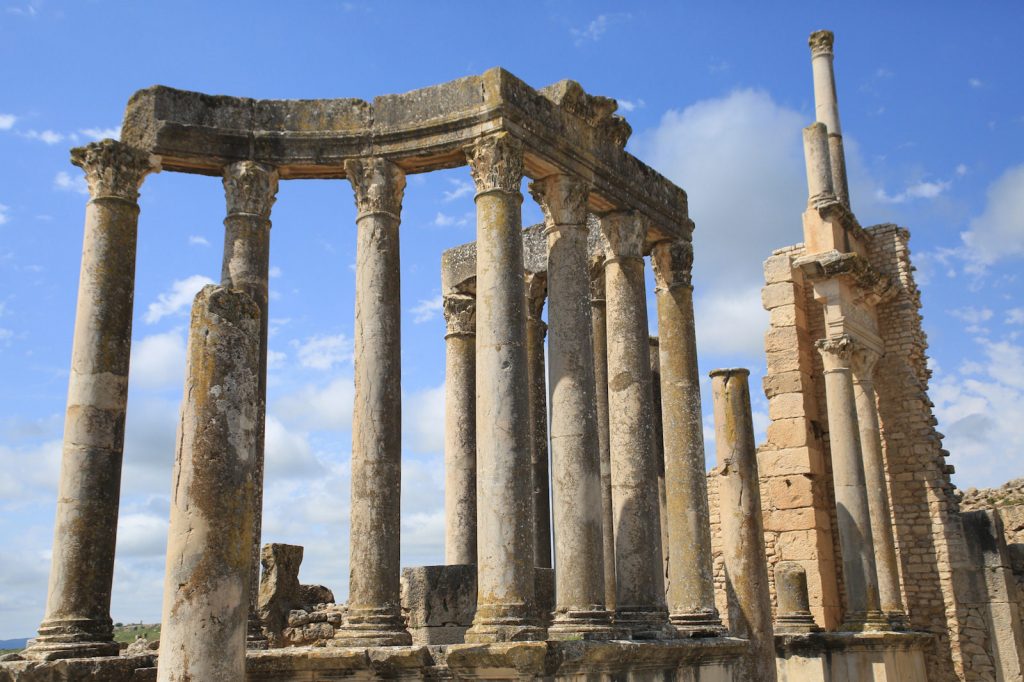 Traditional Tunisian Doors decorated with black rivets can be seen around every corner throughout the country. The color of the doors and the pattern of the rivets vary by region. Doors in areas near the coast tend to be blue, while inland areas often feature yellow ones.

Tunisia’s doors hold significant meaning depending on color and design

The Sahara Desert, proud home of the Tunisian people

The Sahara region that spans southern Tunisia differs greatly according to time and location. Ksar Ghilane, called “the red desert,” has many facilities for travelers, allowing them to enjoy the desert to the fullest while restoring their bodies and minds.

Douz is a city located at the gateway to the Sahara Desert, and is home to the Sahara International Festival every December. Desert residents and people from neighboring countries gather for this festival showcasing horsemanship events, camel wrestling, horse and camel races and traditional music.

Sahara Desert sand is extremely fine, causing patterns to change with the wind

Horses racing through the desert sand at the Sahara International Festival 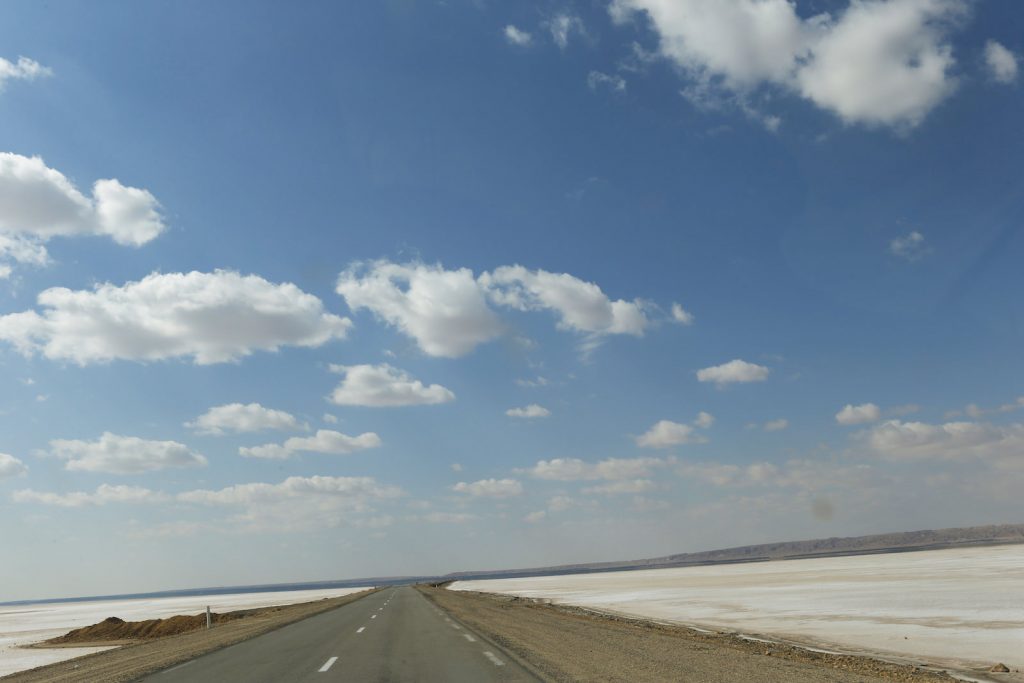 Diva recommended by the Embassy of the Republic of Tunisia

In closing, we would like to feature Emel Mathlouthi, a singer recommended by the Embassy of the Republic of Tunisia in Japan. 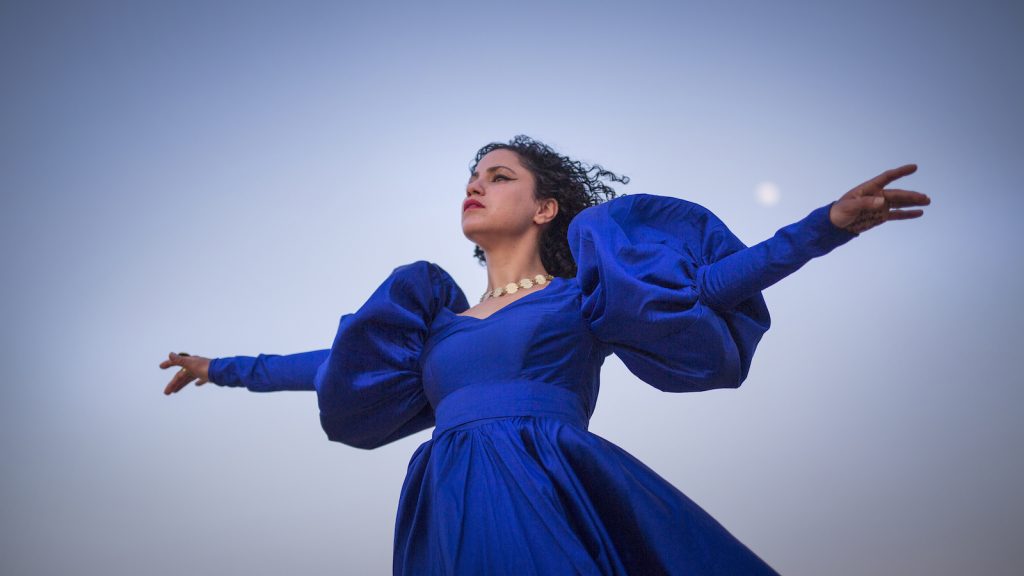 With the Arabic music she grew up with as a foundation, Emel Mathlouthi’s skilled musicianship across many genres and delicate yet powerful voice have added to her reputation as a phenomenal singer. She was the first Arabic woman to be invited to sing at the Nobel Peace Prize Ceremony in 2015, and her performance was very well received. She is currently planning a Japan tour in autumn 2021.

This is the signature song of Emel Mathlouthi’s latest album, which has over 5.7 million views on YouTube (as of May 2021). The music video features the scenery of Tunisia’s capital, Tunis.

This song honors the brave Palestinians who endured decades of poverty and grief at the loss of their homeland and deprivation of basic human rights.

What did you think of your music journey to Tunisia?

(Produced in collaboration with the Embassy of the Republic of Tunisia in Japan, who also provided photos.)