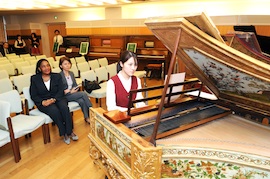 On the afternoon of May 25, the Jamaican Ambassador, Ms. Claudia C. Barnes, accompanied by her secretary Ms. Sawako Toyama, visited the Min-On Culture Center for the first time. They were welcomed in the museum hall by Min-On President Hiroyasu Kobayashi and staff members of the Min-On Concert Association.

At the beginning of a formal meeting, Ambassador Barnes remarked that she was deeply touched by the heartfelt welcome and warm hospitality shown by everyone at the Min-On Concert Association. In the course of discussions, she recalled that she had been greatly impressed and inspired by the ideals of Min-On founder, Dr. Daisaku Ikeda. She also promised that the Embassy of Jamaica would fully support Min-On to bring about a successful cultural exchange between Jamaica and Japan this autumn.