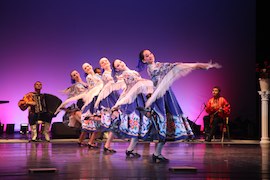 Dancers and musicians from the Russian folk ensembles

In order to realize its aim of effecting significant cultural exchange on a global scale, the Min-On Concert Association has introduced a wide range of international music culture to Japan, while also sending Japanese cultural groups to other countries. In addition, Min-On sometimes organizes concert tours for overseas musical and theatrical groups in countries other than their own.

Fulfilling a request from long-standing supporters of Min-On concerts in Taiwan, the Min-On Concert Association organized a fourteen-day concert tour of the Vladivostok-based Russian folk ensembles Primorye and Ryabina. The tour comprised six performances in the cities of Kaohsiung, Taichung and Taipei, from May 26 through June 8, 2011.

The lively performances won enthusiastic applause from capacity crowds at every venue throughout the tour. In their news program, Radio Taiwan International (RTI) reported on the significance of Min-On’s successful cultural exchange between the Russian performers and the Taiwanese audiences. RTI news is broadcast in nine languages for the benefit of neighboring countries.