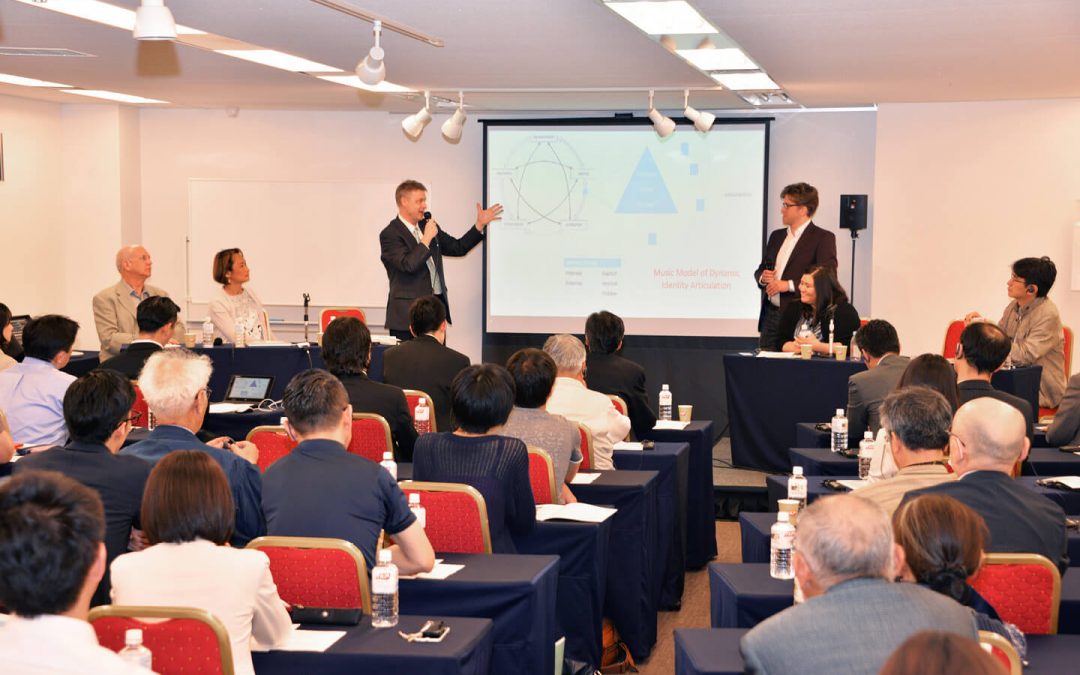 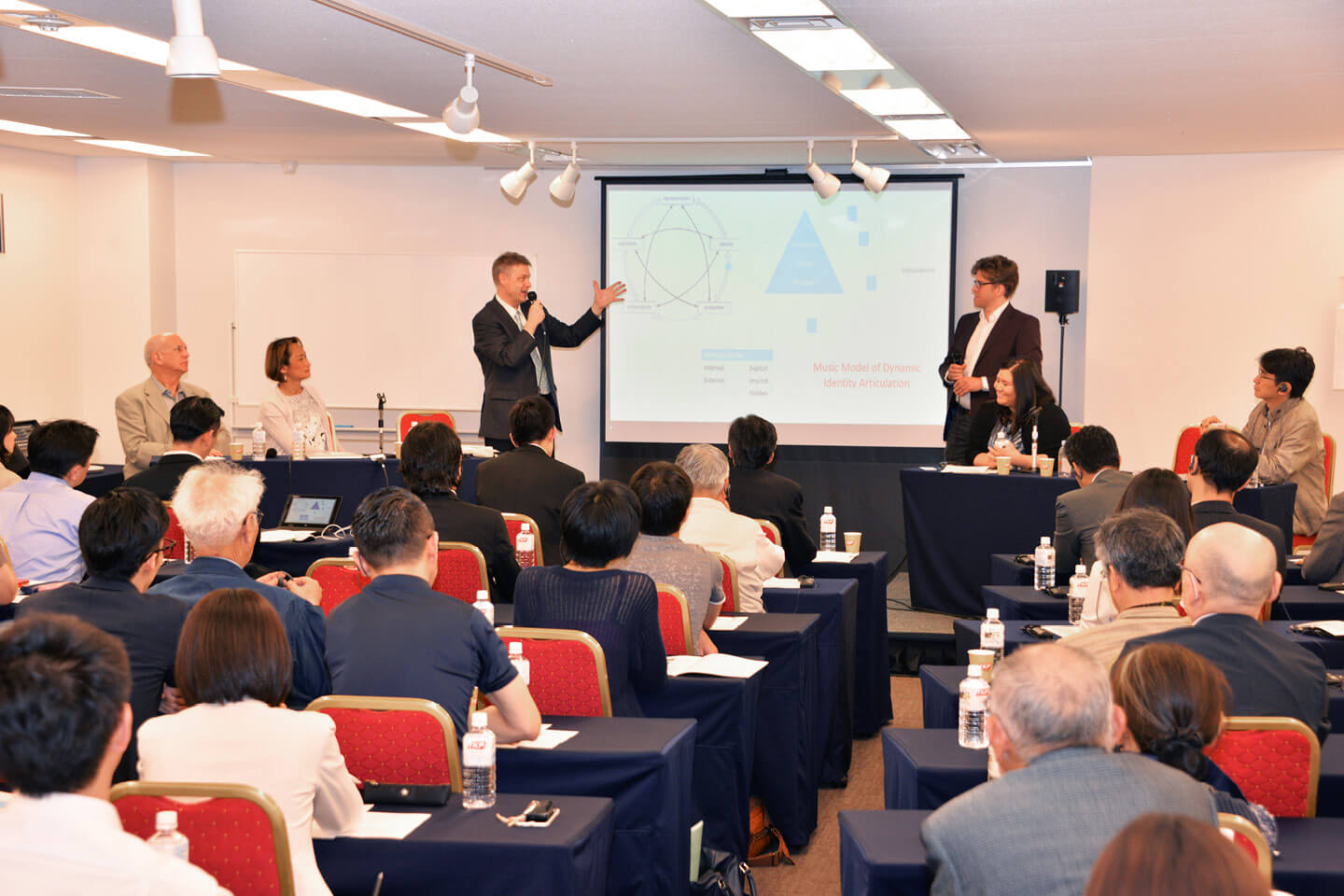 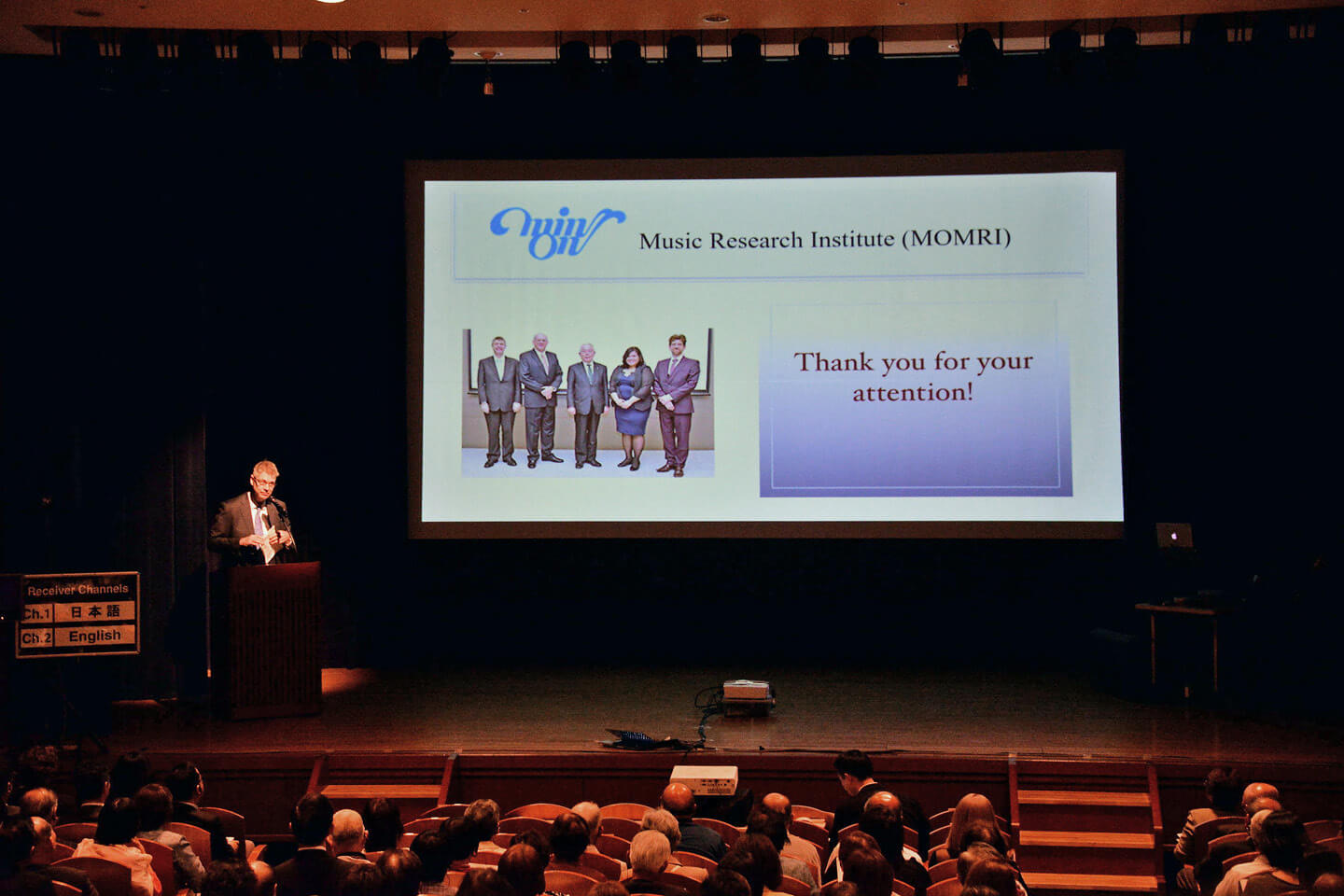 The Min-On Music Research Institute (MOMRI) announced their initiative at the official launch event last February in Tokyo. Since then, MOMRI’s four distinguished research fellows have attended various international conferences and succeeded in their research in the fields of music psychology, music education, music sociology and music ecology, throughout the first year of their academic challenges.

The 2016 MOMRI Annual Report Conference was held on June 2, 2016 at the Yasuda Seimei Building Hall in Shinjuku, Tokyo. The event, attended by over 300 people, presented the accomplishments of the first year and reinforced the institute’s academic foundation of “the application of music in peace-building.”

After opening remarks from Min-On President Hiroyasu Kobayashi, MOMRI’s Senior Research Fellow Olivier Urbain gave a report of their recent accomplishments spanning academic conferences, publications and research work. In conclusion of Part I of the conference, guest speaker Dr. Norihiko Kuwayama, specialist of psychosomatic medicine and president of the NPO Frontline, shared his experiences in Rwanda in the context of post-conflict reconstruction work using music and arts therapy. He also presented his own musical performance alongside a slide show on his activities with young people in Rwanda.

For Part II of the conference, each of the four research fellows delivered reports on their own work, entitled: Different Drums of Ireland by Dr. Olivier Urbain, Peacebuilding Pedagogies: Learning from Musical Violence by Dr. Elaine Chang Sandoval, Operationalizing Music and Peacebuilding through Critical Public Relations by Dr. Craig Robertson and Musicking and Peace: Insights from Ecology by Dr. Michael Golden.

The second day of the conference, June 3, took place at different venue, the TKP Conference Center. MOMRI held the first panel discussion, attended by about 50 audience members, including prominent scholars in music studies and individuals involved in the field of music. In addition to the four research fellows, guest scholars Dr. Norihiko Kuwayama and Dr. Mia Nakamura—Associate Professor at Kyushu University and the author of Possibility of Music: Art, Care, and Culture—joined as panelists.

After opening remarks by Dr. Urbain, who served as moderator of the proceedings, each panelist shared their comments on the topic of “Musicking and Identities: Models for Peacebuilding.” The panelists received insightful questions from the audience and exchanged thoughts and opinions in an informal atmosphere. The great success of the two-day conference indicates a bright future for music research. Furthermore, MOMRI reaffirmed their commitment to the ongoing “multidisciplinary investigation of the potential application of music in peacebuilding activities.”