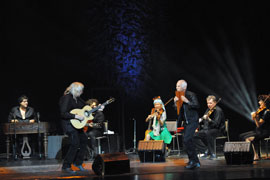 Music is always seasoned by the ethnic and national characteristics of different peoples, and great performing arts are a treasure that encompasses the spirit of all humanity. Romani music does not belong to any particular country with national boundaries, but it is the music of the Romani people, who have their origins in Northern India, although they are now largely settled in Europe. Historically, the Romani people were entertainers and tradesmen who travelled vast distances, often referred to as the so-called Gypsy—although this is now considered a derogatory term. The unique sounds and rhythms of Romani music have been developed under a multitude of influences, starting with Indian roots and adding elements of Asian, Middle Eastern and European musical cultures.

The first-ever performance of the Flairck Global Orchestra in Japan was held on August 27 in Aichi prefecture and subsequently continued on a 13-city national tour through September 20, concluding in Akita prefecture. The band name Flairck means ‘wing’ and it is an acoustic instrumental group featuring diverse forms of chamber music and classically influenced ‘traditional’ music with touches of jazz and improvisation. The Flairck Global Orchestra is based in the Netherlands and is led by Erik Visser, along with 12 other musicians from five different countries around the world. Their unique rhythms and sounds, accompanied with their energetic yet sophisticated performance of diverse styles, drew great applause from the first time listeners of Romani music at every venue across Japan.