Min-On Music Journey No. 21: The Republic of Panama Welcome to Min-On’s Music Journey. Today, the Min-On Concert Association and the Embassy of Panama in Japan guide you to Panama, located at the southern tip of Central America between North and South America.

European and African cultures have been interwoven with indigenous culture in Panama, a country that rose to prosperity as a crossroadsbetween the North and South American continents and the Pacific and Atlantic Oceans. Panama is sandwiched between two oceans and is home to beautiful beaches, islands and tropical rainforests home to many species of flora and fauna not found anywhere else.

The capital of Panama City was founded in 1519 as the first Spanish colony in the country. In the historic areas of Panamá Viejo (the remnants of the original Panama City) and the Panama Metropolitan Cathedral (a Catholic church), which are collectively registered as a World Heritage Site, there still stand many colonial-style buildings that preserve the atmosphere of the Spanish colonial period. In contrast, the new city center has many skyscrapers, just like New York and Singapore, containing major foreign banks and luxury hotels. Here, a large number of global leading corporate offices draw in businesspeople from all over the world. 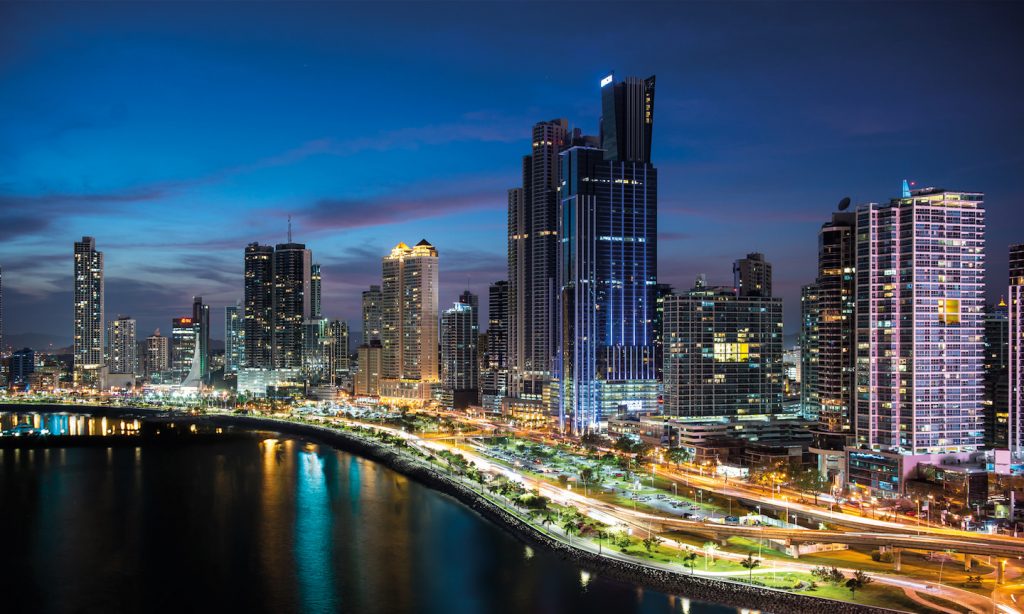 Night view of an oceanfront street in Panama City

The Panama Metropolitan Cathedral is a symbol of Panama City’s historic district, Casco Viejo, built in Independence Square and included in the Archaeological Site of Panamá Viejo and Historic District of Panamá World Heritage Site.

Panamá Viejo was the first civilian settlement in Panama constructed by the Spanish. The city was sacked by pirates in 1671 and stood abandoned for many years, but today it has been restored as an archaeological park. Visitors can enjoy a 360-degree city view at the top of old Panamá Viejo tower. A critical link between two oceans: the Panama Canal

In the capital of Panama City, the Panama Canal serves as a critical link joining the Pacific Ocean and Atlantic Ocean (Caribbean Sea). It is one of the most important canals in the world, alongside the Suez Canal in Egypt and the Kiel Canal in Germany, and a marvelous feat of human engineering well worth a visit at least once in your lifetime. The Panama Canal is about 80 kilometers long and uses a lock system including three sets of lock gates (sluices) and three artificial lakes. Ships travel through the waterway aided by the rising and falling sea level, and it takes approximately nine hours to cross the Isthmus of Panama.

The Panama Canal reduces freight and fuel expenses compared to traveling around the southern tip of South America using the Strait of Magellan, leading more than 13,000 ships to travel through the Panama Canal each year. An expansion project was completed in 2016, allowing huge ships with nearly three times the previous cargo limit to access the canal. Visitors can take in massive tankers gradually traversing the canal from nearby viewing platforms, making it a popular tourist location.

The first large ship to pass through the Panama Canal after the expansion (June 26, 2016)

The name “Panama” is also a name of a tree, and comes from indigenous language meaning, “land abundant with fish and butterflies.” True to its name, a wide variety of rare plants and animals inhabit Panama’s three World Natural Heritage Sites: Coiba National Park, La Amistad International Park and Darién National Park, which are accompanied by a great number of natural reserves.

The La Amistad International Park is a vast World Heritage Site straddling Panama and Costa Rica that features highlands, volcanic areas and tropical rainforests. It is home to many native and endangered species, perhaps the most famous being the quetzal, known as a legendary bird that brings happiness. Coiba National Park extends over 4,000 square kilometers, including Coiba Island, the largest island off the Pacific coast in Central America, and a specially protected marine reserve encompassing 38 small nearby islands. Coiba Island is a popular diving spot, where beautiful coral reefs stretch endlessly along the ocean floor, and visitors can see humpback whales, sea turtles, whale sharks and more. Darién National Park borders Colombia, and its 575,000 hectares are home to 8,000 indigenous people, 300 species of trees and over 1,000 species of birds. 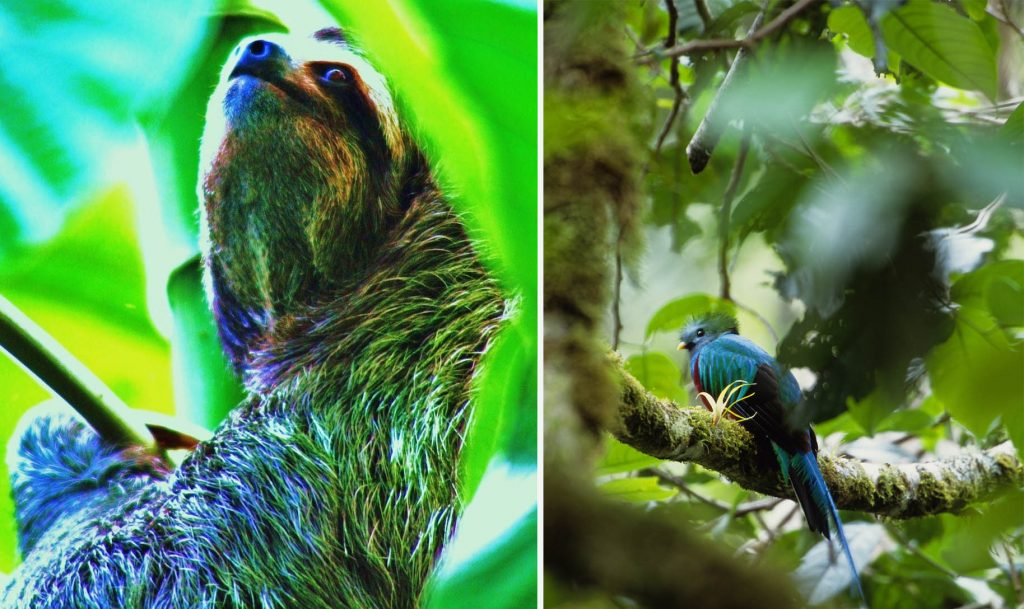 The pygmy three-toed sloth that inhabits the Isla Escudo de Veraguas off the coast of Panama is an endangered species that cannot survive outside of mangrove forests. Due to hunting and the loss of these forests, the population of these sloths has dropped to only 200 animals remaining.

The Biomuseo is a museum with a bright, colorful roof that opened in 2014 at the Pacific entrance to the Panama Canal. Here, visitors can learn about the origins of the Isthmus of Panama, changes in its topography, the ecosystems of rare plants and animals and the current condition of local endangered species. 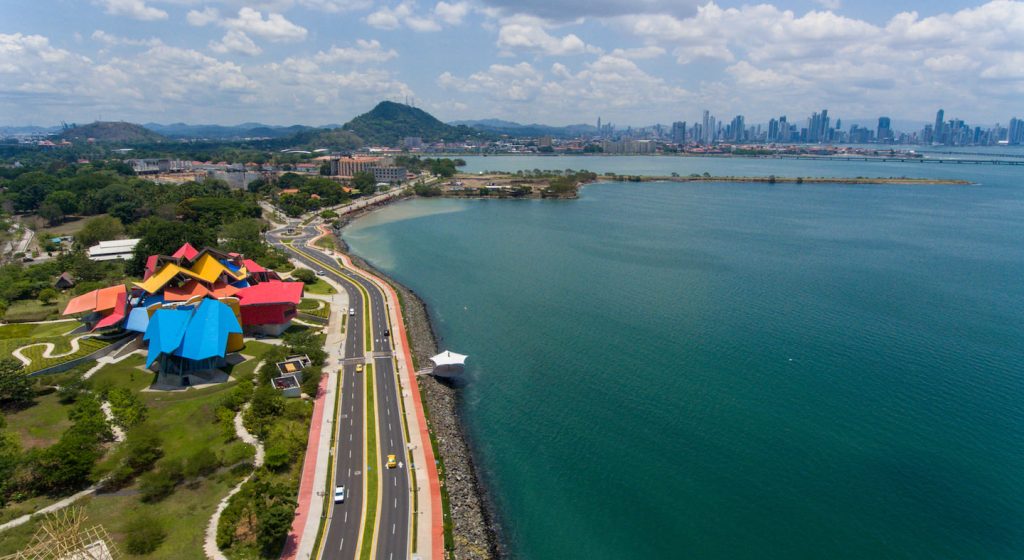 The colorful Biomuseo against the backdrop of Panama City

The pollera and mola, traditional dress of the Panamanian and Guna peoples

In Panama, traditional dress tracing back to the Spanish colonial period is still commonly worn. One of them is the women’s traditional dress called the pollera. Although most Central American traditional dress consists of a blouse and long skirt, the Panamanian garment is uniquely decorated with colorful, intricate embroidery unlike any seen in Spain or other Latin American countries. It takes up to eight months to sew the intricate pattern adorned with sparkling jewels to complete a single garment. Women also wear tortoiseshells and other decorations in their hair to further compliment their dazzling appearance. This traditional dress is also preserved in an important day in Panama’s traditional culture: Pollera Day, celebrated annually on July 22. Women wear pollera and attend special carnivals and festivals held throughout the city on this day. 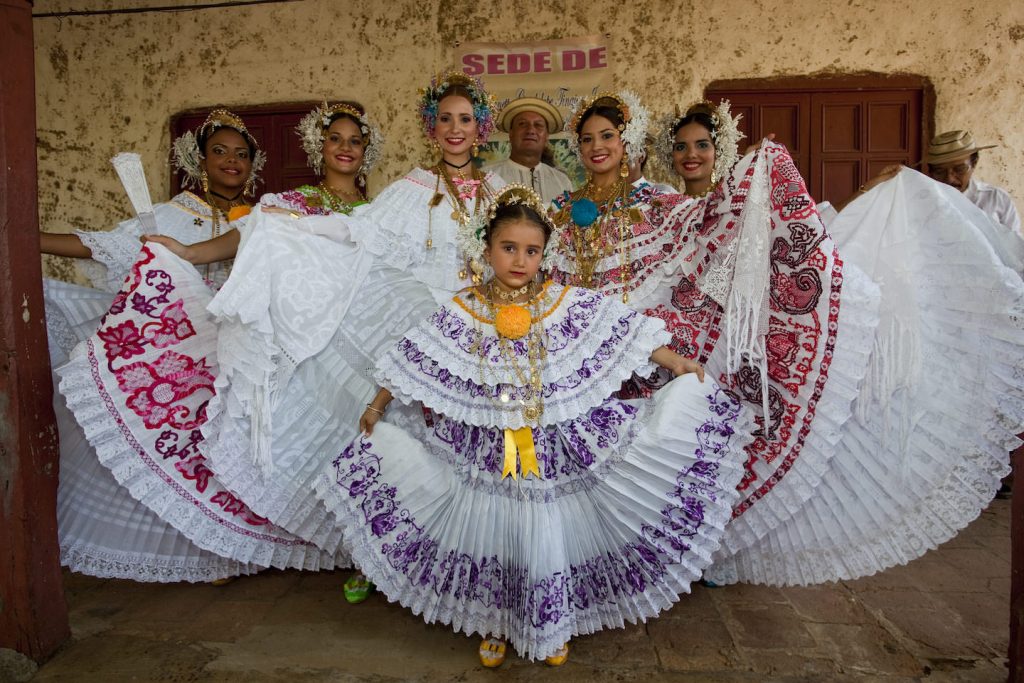 One of many lively carnivals (right) and the annual selection of the carnival queen candidates, a festival highlight (right)

Panama has been inhabited by indigenous people since ancient times, and seven of those tribes continue traditional lifestyles today. The Guna people living in the San Blas Islands continue to follow their ancient cultural traditions and way of life. Women wear traditional attire called a mola, which means “woman’s blouse” in the Guna language. It also refers to the Panamanian art of layering many different colors of cloth, then cutting them away and sewing the edges under to form patterns on the front and back of the blouses. Characteristic designs include fish, bird and plant motifs. The mola is becoming well-known worldwide, and there are museums in Europe and North America displaying the vibrant dress.

This Latin music band was formed in 2007 by a group of internationally active Panamanian musicians. Marco Linares, the band’s leader and music director, is one of Panama’s greatest salsa singers and also an actor. He has won four Grammy Awards as the guitarist in Rubén Blades’ band. He combines a folk string instrument called the tiple with the characteristic Panamanian accordion to create an exciting, modern sound. 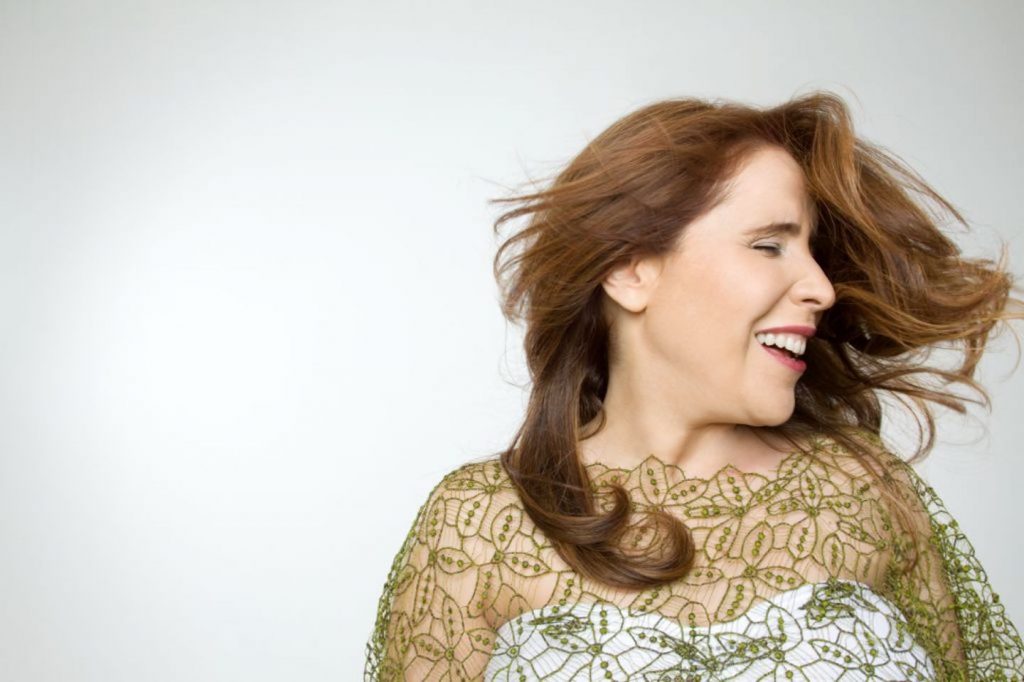 Patricia Vlieg is a leading Panamanian musician, singer, songwriter and composer. She performs a wide variety of genres by incorporating Latin American and other rhythms from all over the world into her jazz. Overcoming her blindness, Patricia has released many albums of traditional music inspired by Panama’s unique culture and art. She has also received many awards, including the Quincy Jones Musicianship Award, the Solo & Ensemble Award and the Professional Achievement Award. She is currently working on a collaboration program called Puentes y Diálogos (Bridges and Dialogues) that collects online discussions between artists from different countries.

Javier Medina Bernal, a musician recommended by the Embassy of Panama

In closing, the Embassy of Panama in Japan would like to feature the musician Javier Medina Bernal. He is a Panamanian composer, singer and songwriter. His poems, novels and short stories have also won national literary prizes in Panama. The lyrics he writes evoke memories of the distant past, and his harmonies beckon listeners on an endless musical journey.

The national flower of Panama, flor del Espiritu Santo (scientific name: Peristeria elata), is a Central American white orchid whose name means “flower of the Holy Spirit.” The flower looks like a dove has perched in the middle of the petals, which is its defining feature. In the Japanese language of flowers, it means “an abundance of blooming flowers.” 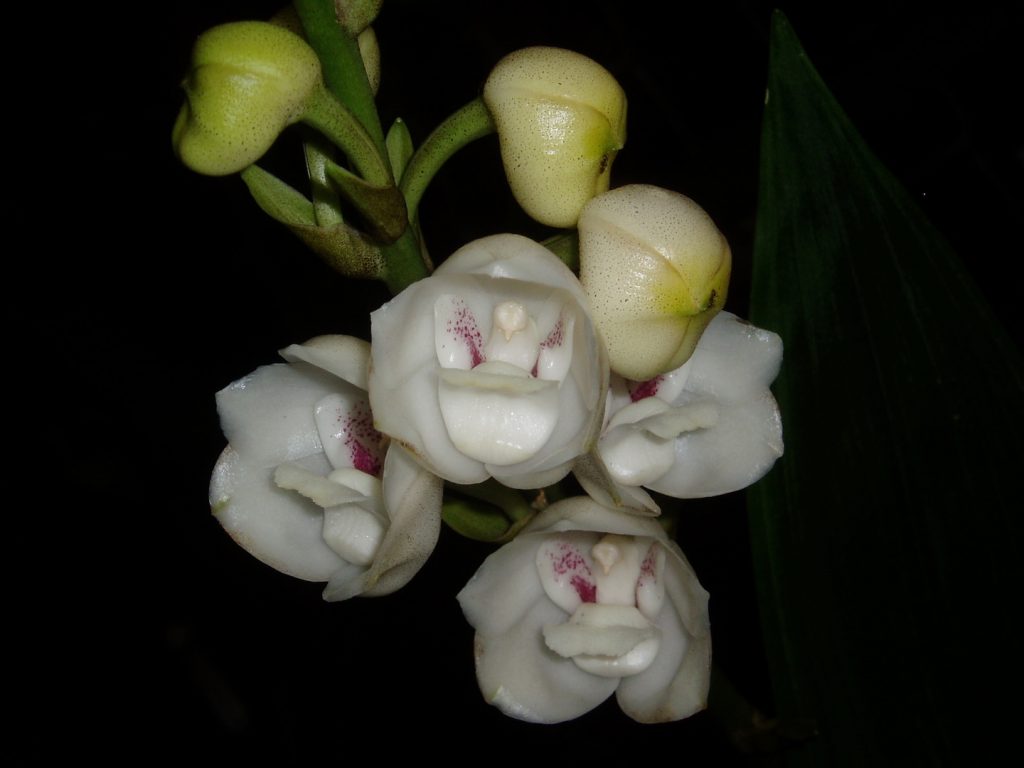