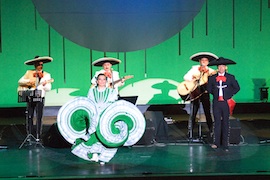 Mariachi is a genre of music that originated in Mexico, a country of legendary sunshine, particularly in the Western state of Jalisco. The word Mariachi refers to a musician who dresses in a particular traje style, which includes ankle boots, a broad-rimmed sombrero, short jacket and a large bow-tie, and plays a specific style of cheerful and vibrant music using violins, trumpets, a classical guitar, a high-pitched guitar called a vihuela, a large bass guitar known as a guitarrón, and occasionally a harp. All the band members sing.

Viva Mexico is a popular Min-On concert series that showcases performances from acclaimed artists and groups from Mexico. This fall, as part of Viva Mexico, the ensemble Mariachi Del Sol, led by Mexican guitarist Miguel Angel Hernandez, completed a twenty-three-date tour of southern Japan. The Mariachi band, accompanied by female singer Viviana and dancers Carlos and Marisera, played a fun and dynamic repertoire of songs, including the popular Besame Mucho and other Mexican favorites. Their performance of lively folk music earned enthusiastic applause at every venue throughout the Kyushu region.