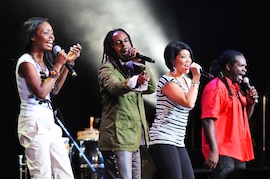 The singers of Jamaica Rocks in performance

On September 9, the long-awaited world premier of Jamaica Rocks was held at Nakano Sun Plaza Hall in Tokyo—venue of a concert by the legendary Reggae artist Bob Marley in 1979. Jamaica Rocks is the name of a talented group of Jamaican singers, musicians and dancers, organized by the Jamaican government’s Ministry of Culture, and dispatched for the purpose of cultural exchange through Min-On’s Caribbean Musical Cruise concert series, performing at venues in twenty-four cities across Japan.

The concert, which also marks the commencement of the next year’s 50th anniversary celebrations of Jamaica’s independence, featured several genres of music and dance, which served as an introduction to Jamaica’s unique and rich musical culture. The performance was followed by a commemorative reception attended by Jamaican Minister Olivia Grange, ambassadors from various countries, and many other distinguished guests.

Jamaica Rocks successfully concluded the month-long tour, rocking Japan with their highly energetic and colorful performances, and left Tokyo to return home on October 17, the group a source of great pride for the Jamaican Cultural Ambassador.