Interview with Her Excellency Claudia C. Barnes, Ambassador of Jamaica 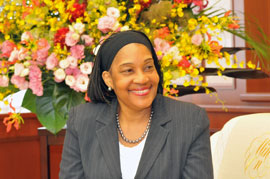 A rich and varied culture shaped by history

Min-On: Could you share your personal thoughts regarding Jamaica, particularly those that touch on its cultural heritage?

Ambassador: Before we begin, I should first like to reiterate my condolences on behalf of the Government and people of Jamaica to the Government and people of Japan following the tragic events in northeastern Japan. We are aware of the enormity of the challenges; however, we know that the Japanese are a strong and resilient people, and we are confident that Japan will emerge from these challenges with an even stronger spirit. I can say with certainty that the people of Jamaica remain in total solidarity with the people of Japan every step of the way.

With regard to your question, let me say first of all that I am very proud to be a Jamaican. I am also extremely proud to be serving as the Ambassador of Jamaica to Japan, a country with which we have a deep bond of friendship and collaborate on many levels. This includes our mutual cooperation in the areas of trade, economic and technical cooperation and, of course, in the area of culture. I have noted that the Japanese have a great love of the Jamaican culture, and this I deeply appreciate.

Jamaica has a rich cultural heritage, which can be traced to our island’s history of colonization—first by the Spanish, then the British—and thus its African influences, enriched by Asian and Middle Eastern influences. These influences have complemented each other and have bequeathed to us a rich and diverse culture. Since independence on August 6, 1962, we have remained united under the motto: Out of Many, One People. This melting pot of races and cultures has resulted in a dynamic and varied Jamaican culture. This is certainly reflected in many facets of our lives, including our music.

Min-On: As part of Min-On’s Caribbean Musical Cruise concert series, the Jamaican government will send a group of artists to Japan under the banner Jamaica Rocks to commence next year’s 50th anniversary celebration in Japan of Jamaica’s independence. What is the significance of this Japan tour, and what do you expect to be the outcome of this cultural exchange?

Ambassador: I think this, again, is a reflection of our belief in Japan’s strength, and our confidence in the future of the country. On June 17, I had the opportunity to visit Sendai City with Miss Jamaica Universe, Yendi Phillips; we were accompanied by two Japan-based Jamaican musicians who put on a concert for tsunami victims at one of the evacuation centers. When I saw the joy in the audience, brought by this concert with just two musicians, I immediately started thinking that a musical performance could bring some healing to those people in the affected zones. If it were possible to organize at least one concert in the affected zones, this, I believe, could somehow help relieve some of the pain in the hearts of the people.

In Jamaica, there are still many fund-raising activities for people in the affected areas, and we continue to pray for the families of those who lost their lives in the earthquake and tsunami. We are truly honored to bring these artists to Japan at this time.

Over many years, several Jamaican artists have toured Japan individually and in groups, but I think this is the first time that the Government of Jamaica has sent such a large and varied group for a Japan tour. This show will feature a range of performing artists, including a number of singers, musicians and even dancers, who are all coming together to bring this concert to life.

I would like to express my deep gratitude to the Min-On Concert Association, which has worked so closely with the Embassy and the Ministry of Youth Culture and Sport of Jamaica to make this tour possible. Some of these artists do not yet have an international presence, so it is my hope that this will help create more opportunities for them. It is our fervent hope that this tour will further enhance the bonds of friendship and cooperation between Jamaica and Japan, and also with the Min-On Concert Association.

I hope that this tour will inspire the people to experience and learn more about Jamaican culture, especially those people who have not yet been exposed to our country. I also anticipate that this will encourage the people of Japan to visit our beautiful country in the future. In this sense, I believe that this cultural exchange will further strengthen the cultural bridge between our two countries.

Min-On: Finally, could you share your thoughts regarding the Min-On Concert Association?

Ambassador: While preparing for a recent visit to your cultural center and reading about your organization, I discovered that one of the tenets of Min-On states that ‘music is a medium of great power, with an ability to transcend all boundaries and differences in race and culture.’ This belief is reflected in your strong support for and promotion of cultural exchanges between many different countries.

We are very proud to be associated with Min-On, and for being selected to perform in Japan at this time. In order to meet Min-On’s high standards, our officials in Kingston worked very hard in choosing these artists, and the Embassy is excited to welcome them to Japan this fall. This tour represents the official start of relations between the Min-On Concert Association and Jamaica, and we look forward to continued collaboration and future activities.