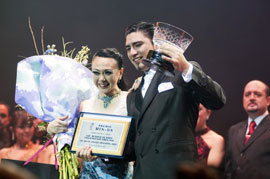 Winning couple at the World Tango Championship performs across Japan

Chizuko and Diego receive the Min-On Award at the World Tango Championship in Buenos Aires, Argentina

Japan’s Chizuko Kuwamoto and Diego Ortega from Argentina took top honors in the stage tango category at the finals of the 8th Buenos Aires Tango Dance World Championship in Argentina in 2010. Thousands of dancers from Argentina and 20 other countries took part in the World Tango Championship. Twenty-two couples from around the globe reached the finals, and the Argentine–Japanese couple won the top prize at the end of the festival on August 31, 2010.

Min-On: Could you share your thoughts about your first-time performances throughout Japan in the Min-On Tango Series as the recipient of the Min-On Award?

Chizuko: To tell the truth, I’ve wanted to stand on the Min-On Tango Series stage ever since I participated in the tango tournament five years ago. That wish came true this time. I have been so moved and very happy that I, as a Japanese native, could introduce Argentinean tango to Japanese audiences. Indeed, every audience was so warmhearted and gave us many calls of encouragement.

Min-On: Could you tell us about any difficulties you have experienced in your career as a tango dancer, and what you pay attention to during your performances?

Chizuko: Obviously, I grew up surrounded by Japanese culture and customs, so I think the hardest thing for me as a tango dancer is the difference in the “sense of spacing” between two people. People who are raised in Argentina naturally acquire this “sense of space” between people, starting from an early age. Kisses and hugs are used as greetings, and people have a proper understanding of this moderately unique sense of spacing, even when they’re in close contact with others. When dancing the tango, this “sense of spacing” is especially important. But Japanese people have not acquired this sense, so when I dance the tango with Japanese men, at first, many of them bump foreheads with me (laughter).

Diego: I feel the same way. I think the difference in this “sense of spacing” is, at the same time, the difference between the cultures and ways of life in Japan and Argentina.

Chizuko: Also, I consider “feelings” that are expressed as something very important, but that is not easy for Japanese people. I feel the music that is playing, I feel my partner Diego’s feeling, and I naturally express what I feel in my heart, every single moment in my tango.

Min-On: Min-On has hosted the Tango Series as a cultural exchange with Argentina 42 times since 1970. Tell us your thoughts about Min-On’s cultural projects.

Chizuko: Until now, I didn’t know much about Min-On’s cultural projects, other than the tango performances. However, this time, I learned how wonderful and respectful your music museum is in treasuring musical culture from around the world. The consideration given to us performers at every show is so meticulous, and the respect shown to us as artists is invaluable. I also want to express my heartfelt respect to Min-On for its dedication in raising young artists with the aim of advancing musical culture.

Min-On: How is tango viewed by young people, and what is its status now in Argentina?

Diego: For a while, even in Argentina, tango was seen as a dance for older people, from an older era, and it wasn’t popular among young people. Lately, a new style of tango music has appeared, and young people are beginning to pay attention to tango as well. Now I’ve become a champion with Chizuko, and as a young man, I feel very deeply that introducing tango to young people around the world has become my mission.

Min-On: Would you tell us about your future goals?

Chizuko: I’ve studied ballet and performed in musicals ever since I was young, so my dream is to someday perform in a “Tango Musical.” Ideally, apart from the songs, I’d like it to be a musical without lines, acted through tango dance. I’d like to overcome the language barrier, to take a tango musical produced in Japan and perform it in Buenos Aires, the birthplace of tango.