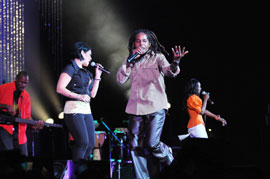 The artists that make up Jamaica Rocks

The Min-On Concert Association initiated a new concert series in the summer of 2009 entitled The Caribbean Musical Cruise to showcase the rich and varied musical cultures of the Caribbean nations, each of which has its own unique ethnic and historical background. The destination of the second cruise, departing this summer, is Jamaica—an island with a vibrant musical culture of global appeal and spanning a great variety of musical genres, including mento, ska, rocksteady and of course reggae.

On April 27 this year, after a series of meetings with H.E. Claudia C. Barnes, the Jamaican Ambassador to Japan, and kind assistance from her embassy in Tokyo, an official delegation from the Min-On Concert Association, led by its executive director Takakazu Watanabe, arrived in Kingston to meet with representatives of the Jamaican government. During their short stay in Kingston, the delegation was welcomed by the Honorable Olivia Grange, Minister of Youth, Sports and Culture, H.E. Paul Robotham, a former ambassador to Japan, Under Secretary at the Ministry of Foreign Affairs, and other government officials in various government agencies. A series of fruitful meetings was held, and preparatory activities concluded with a group of Jamaican artists and technical staff.

During discussions, Minister Grange observed that “Jamaica and Japan have a long-standing relationship, and this cultural exchange with Japan through these Min-On concerts is a wonderful opportunity to further develop the friendship between our two countries.” Touching on the significance of the event—the first of its kind—she expressed a decision made by the Ministry: “This concert event represents the commencement of next year’s 50th anniversary celebration of Jamaica’s independence. Our government will send a group of Jamaican artists to Japan as our cultural representatives for Min-On’s Caribbean Musical Cruise concert series.”

During a courtesy visit to the Ministry of Foreign Affairs and Trade, Ambassador Robotham shared his memories of Min-On from his time in Japan serving as the Jamaican ambassador: “I was always inspired by the high standards of artist selection at Min-On concerts in Tokyo, and delighted by the quality of their performances. Min-On’s activities made it clear to me how important cultural exchanges are for helping people better understand one another. So it is a great honor to be able to send artists from Jamaica this time, and realize this cultural exchange as the 104th country to make such a gesture of goodwill.”

In the course of preparatory activities in Kingston, Mr. Sydney Bartley, principal director of culture and entertainment of Jamaica, introduced the group of artists known as Jamaica Rocks, a newly formed group initiated by Minister Grange specifically for this Japan tour, consisting of four popular singers—Abijah, Tessanne Chin, Ieye, and Dwight Richards—and five members of Jimmy Cliff’s backing musicians known as The Skool Band, as well as four dancers from the Jamaican National Dance Theatre Company. The group performed exclusively for the Min-On delegation, displaying a variety of styles.

The Caribbean Musical Cruise in 2011 is scheduled to call in at 24 cities across Japan from September 9 through October 16, welcoming audiences on board to enjoy the rich and colorful performances of Jamaica Rocks.