Exploring the Richness and Diversity of Jamaica through Music 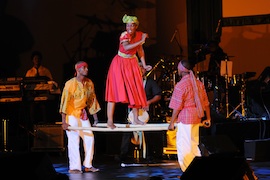 Mixing the rhythms of Africa with the melodies of Europe, the evolution of Jamaican music has been influenced as much by Jamaica’s cultural heritage as by the social conditions on the island itself. Until its rise to global popularity in the 1970s, Jamaican music made a journey all of its own.

After the English seized control of Jamaica from Spain in the 17th century, they encouraged new settlers to come to the island through gifts of land, and soon the economy was booming through the business of the vast sugarcane plantations. During this time, many Africans were brought to the island as slaves, who in turn brought with them new languages, new religions, new music, different cultures, beliefs and ways of life.

The eventual mix of cultures led to what are probably the earliest forms of Jamaican folk music, which were generally sung in a local Creole that came about through the interaction between Europeans and Africans. These folk songs can be placed in two broad categories: European-influenced forms such as nursery songs and ring games, and other forms like Kumina and Tambo, where the influence is clearly African.

It was between these forms that a uniquely Jamaican sound started to emerge in the form of Mento. Mento draws heavily from these folk forms, featuring acoustic instruments such as acoustic guitar, banjo, hand drums and rhumba box, and also incorporates pan-Caribbean influences. As Jamaica entered the 20th century, mento melded with American popular music, resulting in further influence from jazz and dance-band styles.

By the mid-1950s, Jamaica had transitioned from a rural society into an urban one. Parties gathered around mobile sound systems, and a new beat-driven music gained popularity. This was known as Ska, and combined elements of Jamaican mento with American rhythm and blues. The drums were taken from traditional Jamaican drumming and marching styles, and the guitar emphasized the offbeats, flipping the R&B shuffle beat and giving rise to the new sound.

In the 1960s, ska gave way to the less jazzy and more relaxed Rocksteady, characterized by a slower tempo and bass-heavy sound. This sound dominated for two years until the rise of Reggae, a term which emerged around 1968 and is now sometimes used to refer to all popular Jamaican music. There are, however, many popular sub-genres such as Dub, Dancehall and Ragga, which all find their roots in the reggae sound.

During the 1970s and 1980s, reggae achieved true international acclaim with the success of groups like The Wailers, and movies like Jimmy Cliff’s The Harder They Come. When Eric Clapton’s version of Bob Marley’s I Shot the Sheriff became a hit worldwide, it was a sign that this small Caribbean crossroads had made its mark at a global level.

Jamaican music remains today a truly global phenomenon, with fans and artists all over the world, some of who may never have the chance to visit the birthplace of this great music. Min-On now presents a unique opportunity for music lovers to experience the diversity and richness of Jamaica’s music culture. Through these concerts, which bring a great variety of Jamaican artists to Japan, audiences will be treated to an up-close encounter with Jamaican culture at its finest.