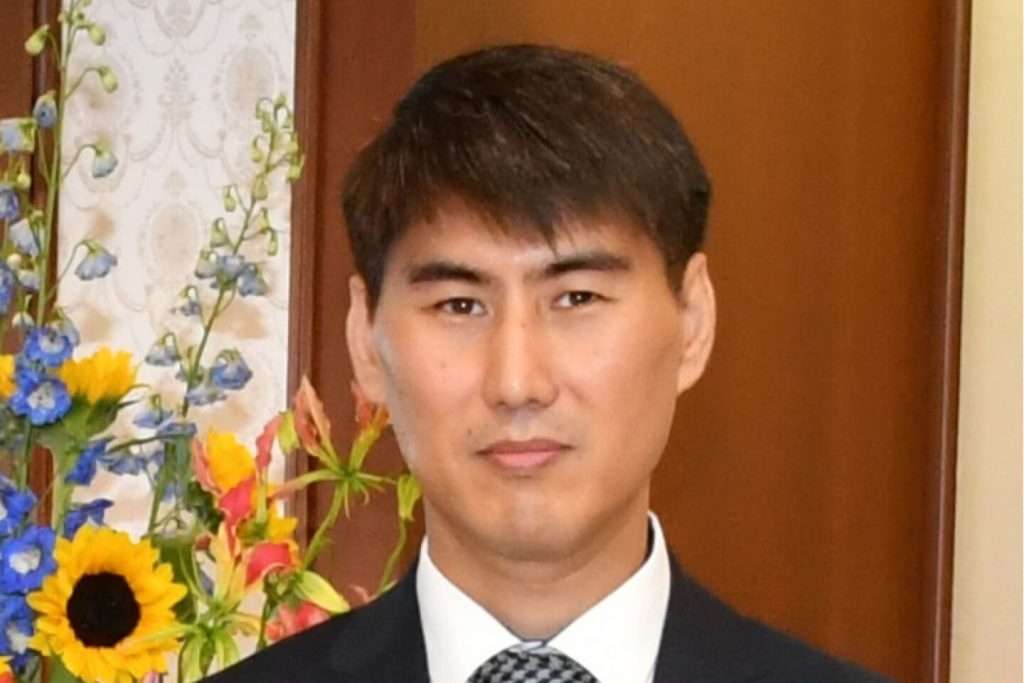 Interview with H.E. Chingiz Aidarbekov, Ambassador of the the Kyrgyz Republic to Japan

Kyrgyzstan is a mountainous country located in Central Asia on the historical Silk Road, with incredible natural beauty and a rich cultural heritage of nomadic traditions. The Kyrgyz Republic achieved independence as a sovereign nation from the former Soviet Union in 1991 and established diplomatic relations with Japan in 1992. With support from the Embassy of the Kyrgyz Republic in Tokyo, to celebrate the 25th year of friendship between the two countries, the Min-On Music Museum presented a series of three different outreach programs featuring the Kyrgyz folk band “Ordo Sakhna,” for three consecutive days during Kyrgyz Cultural Week in November 2017. First, a Min-On Museum Concert at the Min-On Culture Center, then a Cultural Lecture and Concert at the Akasaka Civic Center, and lastly, a School Concert at Akabane Elementary School in Minato Word in Tokyo. The members of Ordo Sakhna delivered a masterful performance of authentic Kyrgyz folk instruments, including the komuz (a three-stringed lute), the oz-komuz (mouth harp), the chopo choor (clay wind instrument), the sybyzgy (a side-blown flute) and the kuiak (a four-stringed instrument played with a bow). The performances also featured the reciting of epic Kyrgyz poems, including a narrative singing of the well-known epic Manas, for the audience at all three venues. After the series of successful events, we had the honor of interviewing H.E. Chingiz Aidarbekov, Ambassador of the Kyrgyz Republic to Japan.

Ambassador Chingiz Aidarbekov: I am very pleased and deeply honored to successfully host a number of concerts during Kyrgyz Culture Week to celebrate the 25th anniversary of establishing diplomatic relations between the Kyrgyz Republic and Japan. In particular, I would like to extend our sincere gratitude to the Min-On Concert Association for their efforts to organize these significant events, including the cultural lecture in Tokyo.

Min-On: Indeed, the audiences at each concert really enjoyed their first-time experience with the musical culture of the Kyrgyz Republic, and the elementary schoolchildren were especially excited on such a wonderful occasion. They shared very positive comments and impressions after the performance by Ordo Sakhna.

Ambassador: We are very happy that so many Japanese schoolchildren could experience traditional Kyrgyz folk music. It was a treasured opportunity, not just for them, but for us as well. I was surprised and deeply inspired by the students politely listening to unfamiliar foreign music for an entire hour-long concert. Children are the future of their nations and the world. What they experience during childhood will certainly determine their future, and thus, ours. Seeing the schoolchildren’s naïve and positive responses to the performance of Ordo Sakhna, I was so happy, and I’m sure that first encounter with Kyrgyz musical culture was deeply engraved in their minds. I cherished the experience, and I hope that those Japanese schoolchildren will someday visit the Kyrgyz Republic to further strengthen the bond of friendship between our two countries. 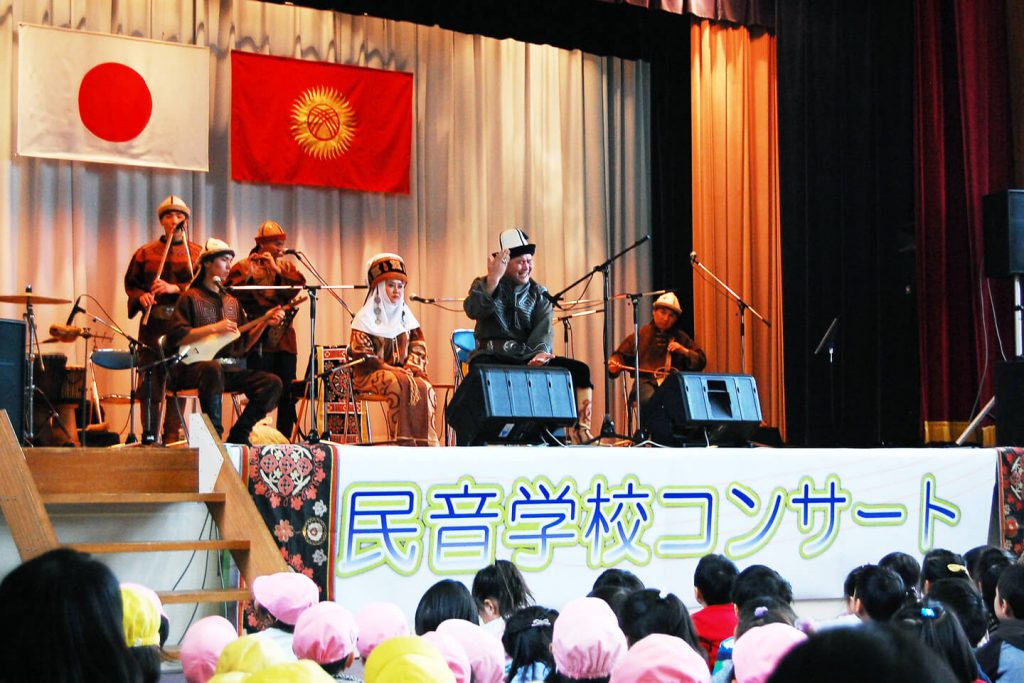 Min-On: Yes, it was obvious through their facial expressions—they were genuinely interested in the performance of various folk instruments, as well as surprised and inspired by the unique narrative singing of the epic poem Manas.

Ambassador: Manas is an orally transmitted epic poem, a patriotic tale of its eponymous hero, Manas. The poem contains approximately a half-million lines, which is twice as long as the Greek epic, Homer’s Iliad. It is considered one of the longest epic poems in history. Once in the past, Kyrgyz Manaschi—the reciters of the epic poems—recited the entirety of Manas without stopping, over several days. Thanks to the esteemed epic Manas and the Manaschi narrators, our Kyrgyz language, folklore and ethnic history has been orally transmitted, without being written down, for many years. It has been orally preserved to this day— rich Kyrgyz cultural heritage passed down from generation to generation. In that sense, the great Manaschi narrators are highly admired by Kyrgyz people as precious messengers of our cultural values.

Min-On: Please tell us briefly about the ethnicity, history and culture of the Kyrgyz Republic.

Ambassador: There is no evident proof, but we see quite a few similarities in physical appearance between the people of the Kyrgyz Republic and Japan. There is an amazing tale surrounding the reason for these similarities. It is said that the people of the Kyrgyz Republic and Japan belonged to the same race in ancient times. Then, over time, the people who liked eating meat became Kyrgyz, and those who liked eating fish migrated east and became Japanese. The facial resemblance between the people of our countries is very obvious, and many similarities can found in our languages. Also, it is very interesting that just as some Japanese infants are born with a congenital birthmark, many Kyrgyz people exhibit the same Mongolian blue spots during childhood, a feature only found only among specific races worldwide. 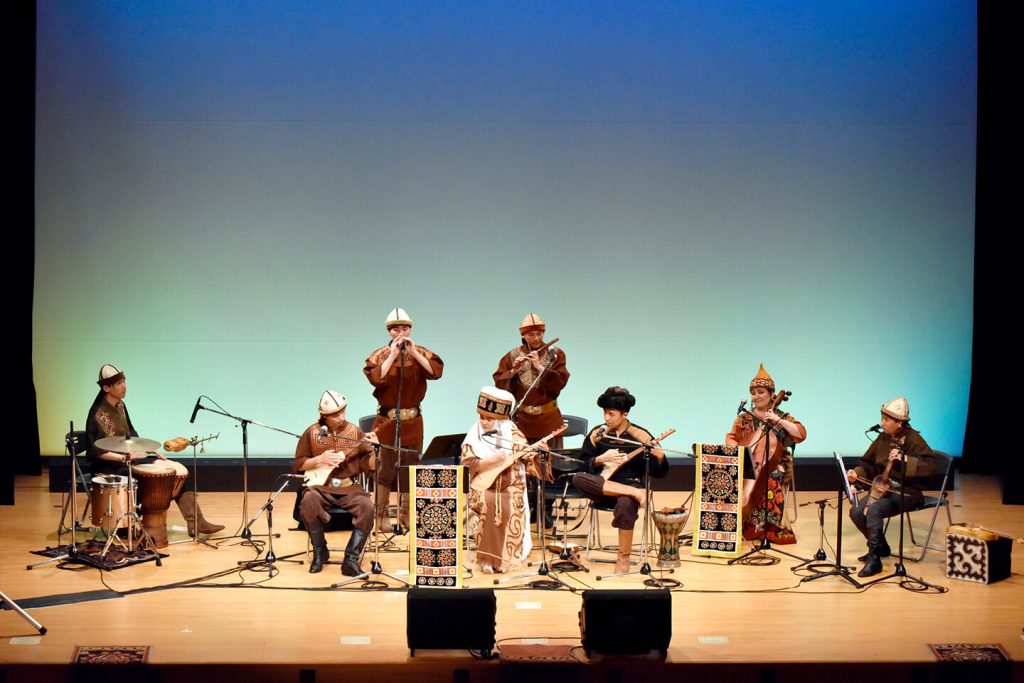 Traditional culture unique to the Kyrgyz people includes nomadic yurt dwellings, a sort of portable house tent (called boz-ui in Kyrgyz) made of woolen felt on a collapsible wooden frame. These Kyrgyz yurts are very durable yet transportable, making them convenient and environmentally friendly. Although they are lockable, Kyrgyz people rarely lock their yurts, and welcome visitors into their homes anytime. This fact definitely says something about the open-mindedness of the people and culture of the Kyrgyz Republic.

The flag of the Kyrgyz Republic consists of a yellow sun in the center of a red field. The center of the yellow sun contains two sets of three red lines intersecting, which is a symbolic illustration of the roof top construction of Kyrgyz yurts called tunduk, which commonly have two sets of three crisscrossing wooden slat laths across a circular opening at the top. These lines symbolize the origin of our country and the greater universe. The red of the field on the flag symbolizes the bravery and courageous spirit of the Kyrgyz people—ethnic characteristics we are proud of. Also, the yellow of the sun symbolizes peace and the richness of the Kyrgyz Republic’s cultural heritage.

Min-On: Thank you so much for your time and for allowing us to interview you today.

Ambassador: Thank you as well. I am delighted for this opportunity. I really hope to maintain a close friendship, and work in collaboration with the Min-On Concert Association on another cultural and musical initiative in the near future.